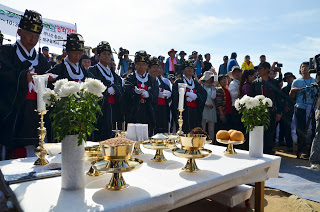 In Korea, the founding of the Korean nation is commemorated on Gaecheonjeol (개천절; 開天節; literally "Opening Sky Day"), the 3rd of October.  It is one of the six national holidays of South Korea and, though not a holiday, celebrated in North Korea.

According to the Korean founding myth, two major events occurred on October 3rd.  The first took place in 2457 BC when Hwanung (환웅; 桓雄), a bastard son of the god of heaven, descended to Earth.  Then, on the same day in 2333 BC, his son Dangun Wanggeom (단군왕검; 檀君王儉) founded Gojoseon (고조선; 古朝鮮), commonly regarded as the first Korean nation state.

* The Mythology according to Samguk Yusa (삼국유사; 三國遺事; "Memorabilia of the Three Kingdoms")

Upon the descent of Hwanung, a tiger and a bear approached him and asked to be anthropomorphised.  Hwanung told them to stay in a cave for a hundred days, avoiding sunlight and subsisting only on garlic and mugwort.

The tiger soon gave up, but the bear persisted and, in only 21 days, transformed into a beautiful woman and was named Ungnyeo (웅녀; 熊女).  As people wanted to have nothing to do with the bear woman, Ungnyeo grew lonely and prayed again to Hwanung, this time wishing for a child.  Hwanung then turned himself human and married Ungnyeo.  Subsequently, they begot Dangun Wanggeom.

This myth has been used in attempts to link the Koreans with Siberian shamanistic traditions, or with other arctolatric (bear-worshipping) cultures of the region, such as the Nivkh in eastern Russia, the Ainu in Hokkaido and the extinct Kumaso people of Kyushu, Japan.

The story is also regarded as the first reference to Korean herbalism.

Throughout the ages, Korean states consistently commemorated a day in October, where the head of the state was expected to lead a prayer ceremony to the founding gods, as well as to the gods of grain, since October overlaps with the harvest season.

The legend has it that in the late 15th century, King Seongjong of Joseon, after leading such a prayer ceremony, invented Seolleongtang (설렁탕), a type of bone broth beef soup, in order to feed the crowd.  The soup is now eaten perennially.