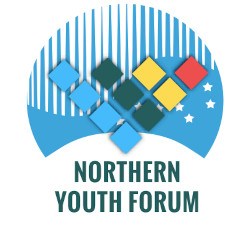 The Northern Youth Forum (NYF) – is a youth wing of the Northern Forum, consisting of representatives of young people aged from 16 to 40 years.

Objectives of the NYF:

Main areas of the NYF are:

History of the NYF

In 2020 Ekaterina Sofroneeva, Savina Alekseeva, Sardaana Zhendrinskaya and Sardaana Syromyatnikova have initiated creation of the Northern Youth Forum. Thanks to the support of the Northern Forum and Vladimir Vasiliev personally, the idea has been realized.

To test the hypothesis about the need to create NYF, a same-name event was held within the framework of the Northern Sustainable Development Forum on September 27-28, 2020.

The 1st Northern Youth Forum was successful and confirmed the need for the creation of the NYF. Initially, it was planned to make the 1st NYF not just an event, but a basis for further work to intensify work with young people in the northern regions and countries as well as people and organizations from other parts of the world who are interested in cooperation with the North and the Arctic.

About 300 participants from the regions of Russia, Iceland, Finland, Norway, Sweden, USA, Canada and China have registered for the forum. The NYF  program consisted of 14 events, all of which were held in an online format.

In addition, the conference “Model of the Youth Forum of the Economic and Social Council of the United Nations (ECOSOC)”, Presentation session “Initiatives for Sustainable Development”, networking session “Icebreaker”, round table “Preservation of traditional knowledge of indigenous peoples in the modern conditions of the North ", seminar «Food security of the Arctic and the North" and public lecture" Meetings with interesting people."

The large-scale youth event has been organized thanks to the combined efforts of various organizations. The co-organizers and partners of the 1st NYF were: Yakutia Innovation Development Fund, Vaasa University (Finland), Yakutia Venture Company, Youth Wing of the Union of Women's Organizations of the Republic of Sakha (Yakutia), Yakutia Congress Center, North-Eastern Federal University, Arctic State Institute of Culture and Arts, Arctic State Agrotechnological University, Ytyk-Kyuelskaya Secondary School No. 1, Churapchinsky State Institute of Physical Culture and Sports, Unified Volunteer Center of Tattinsky Municipal District, Youth Council of RAIPON, Youth Council of Indigenous Minorities of the North of the Republic of Sakha (Yakutia), as well as the Ministry of Youth Affairs and Social Communications of the Republic of Sakha (Yakutia) and the Youth Government of Yakutia.

In a short time, the initiative group established contacts with the Artic Youth Network, MGIMO Arctic Student Research Club and other organizations.

On November 19-21, the Northern Forum Model (NF Model) was held in an online format - an event in the format of a role-playing game based on modeling the activities of the Northern Forum structures, and allowing the most organically and effectively to include in the joint work of youth representatives, dealing with issues of the northern regions in various aspects.  About 250 participants from 11 countries (Russia, Canada, USA, Latvia, India, Azerbaijan, Uzbekistan, Greece, Ukraine, Peru, Great Britain) applied for participation. The event was organized by the Northern Forum, Yamal-Nenets Autonomous Okrug, MGIMO Arctic Student Research Club, North-Eastern Federal University, Vaasa University, International Institute of Energy Policy and Diplomacy, Intersfera NGO.

On December 11, 2020 Ekaterina Sofroneeva made a presentation of the NYF and presented the results of the NF Model at the meeting of the Committee of Regional Coordinators of the Federation Council. The meeting participants supported the initiative of youth to unite and work together.

In April 2021 Ekaterina Sofroneeva and Savina Alekseeva took part in the General Assembly of the Northern Forum.

Creation of the Northern Youth Forum was approved by the NF Resolution #229 dated April 28, 2021.

Coordinators of the NYF