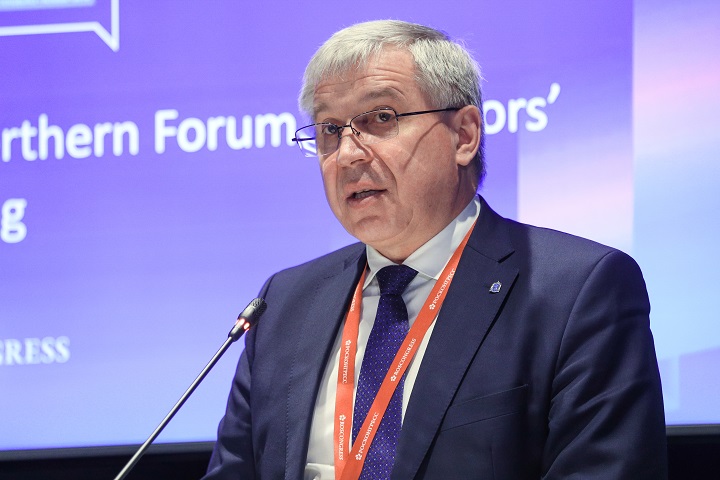 “Under national goals and strategic development objectives, the Government committed to developing the Northern Sea Route by 2024 and take the cargo traffic up to 80 million tons involving Russia’s regional authorities, mainly in the northern regions”.

Mission of the project:

Creation of an innovative model of the School to ensure quality education, successful adaptation and comprehensive development of the learning countries of the Arctic region through the individualization of the educational process, the formation of universal educational activities and key competencies of the graduate.

Development and self-development of participants in the educational process through networking with educational institutions in Russia and the world, the organization of a system of continuing education and international cooperation.

The development of international regional cooperation through the international organizations of the United Nations, UNESCO, the Arctic Council, the Northern Forum and the organization of creative interaction (including the educational programs of partner schools abroad, educational exchange projects for schoolchildren), the integration of the basic values of Arctic civilization into universal values in the educational process.

The Decree of the Government of the Republic of Sakha (Yakutia) of November 5, 2015 No. 417 "On the conclusion of an agreement on public-private partnerships for the design, creation and maintenance of pre-school, general, additional education and culture facilities in the urban district" Yakutsk "of the Sakha Republic (Yakutia)».

A meeting of the Arctic Council’s Sustainable Development Working Group (SDWG) was organized in Rovaniemi, Finland, on October 29, 2018.

Feodosia Gabysheva presented a project, initiated by Sakha Republic and supported by the Northern Forum, title of the project is “Children of the Arctic: Access to quality general education and competences for living in the Arctic”.

Russian Federation public authorities and society pay constant attention to the issues of education and culture, including the creation of conditions for the preservation of linguistic and cultural diversity in preschool and school education.

The Sakha Republic (Yakutia) is one of the leaders in ensuring general education for indigenous people, and successfully implementing the UNESCO projects “Literacy of Indigenous Peoples Leading a Nomadic Life”, “Teachers of the Arctic”, “Preserving a Disappearing Yukaghir Language” and others. An interregional school partnership project “School of Life in the North” is being implemented in collaboration with the Northern Forum, and take the form of metasubject competitions, distance forums and conferences.

On September 2017 at the meeting of the Sustainable Development Working Group delegation of the Sakha Republic (Yakutia) showed a presentation video on a brief vision of the International Arctic School. On October 29, 2018, the delegation presented an updated project, which was approved by the Russian Association of Indigenous Peoples of the North (RAIPON) and the Northern Forum.

During Finnish Chairmanship of the Arctic Council, the Russian Federation, Finland and Canada initiated a project “Arctic Children – Preschool Education and Smooth Transition to School”.

Note that project “Arctic Children – Preschool Education and Smooth Transition to School” was initiated by the Russian Federation’s Federal Agency for Ethnic Affairs and Russian Association of Indigenous Peoples of the North (RAIPON). The Ministry of Economic Development of the Russian Federation also took part in the project developing. Project’s implementation has several stages.

The Sakha Republic in cooperation with the Northern Forum proposes to extend this project for a period of next Chairmanship, and to expand it to school and, in future, vocational education.

The title of the proposed project “Arctic Children – Preschool Education and Smooth Transition to School” carries important information about the objectives of the project.

In accordance with the priorities of the SDWG (the sustainable development of society refers to three major components of human existence: economical, ecological and human), this project aims to identify best practices in the system of secondary education, orienteering's on human development with the "Arctic competencies" for life.

Education for indigenous people with a traditional way of life, living in inaccessible and remote areas, requires constant attention. This is connected with the new challenges of globalization and with the economic development of subarctic territories, as well as with the introduction of new technological economic system, including the field of education.

The project aims to find answers to the following questions:

On 2019 the International Arctic School will be built in Yakutsk, the capital of the Sakha Republic (Russian Federation).

The International Arctic School is ready to become a coordinating organization cooperating with the Russian Federation’s Federal Agency for Ethnic Affairs.

The mission of the International Arctic School is to educate competitive, responsible citizens, who are able to learn throughout life, aimed at serving all people and developing the Arctic region on the basis of intercultural understanding and respect.

At the SDWG meeting most of the participating countries and permanent participants expressed support for the continuation of this project and an extension to school and vocational education.

The meeting participants expressed a common hope that together we will be able to develop the network of schools and create an innovative model of education, demanded by our countries and meeting the needs of our peoples.