80th anniversary of ALSIB: Participants of the round table discussed prospects for cooperation 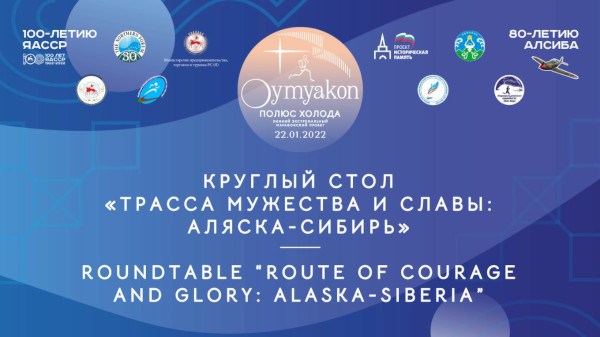 On January 21, 2022, within the 3rd Pole of Cold extreme winter marathon in the village of Tomtor, Oymyakon District, and the 80th anniversary of the Alaska-Siberia air route, a round table "Route of Courage and Glory: Alaska-Siberia" was held.

The main goal of the organizers is to highlight the preservation of the historical heritage of the legendary air route Fairbanks - Yakutsk - Krasnoyarsk (ALASKA - SIBERIA), as well as to create the International Association dedicated to the memory of the route.

Despite the years that have passed since the World War II and the use of the route for its intended purpose, the interest in the topic has not faded; on the contrary, it is growing from year to year. This explains the response of the Northern Forum regions and the confirmed participation of about 70 representatives from many spheres and structures: authorities, museums, cultural centers, organizations and schools of Chukotka Autonomous Okrug, Magadan Oblast, Sakha Republic (Yakutia), Krasnoyarsk Krai, the State of Alaska and several US cities.

At the same time, as was noted by the US participants, few people in their country now know about this route and there is a need to establish close cooperation with Russia to highlight the military commonwealth of the two countries for the victory over fascism and peace on Earth.

Despite the short preparation period, the Northern Forum managed to attract almost all interested organizations from both countries.

The event was moderated by the Northern Forum Executive Director Vladimir Vasilev.

The Head of the Sakha Republic (Yakutia) Aisen Nikolaev sent his greetings to the participants of the round table.

The Vice-Governor – Deputy Chair of the Government, Head of the Department of Education and Science of Chukotka Autonomous Okrug Andrey Bolenkov, Chair of the Standing Committee of the State Assembly (Il Tumen) of the Sakha Republic (Yakutia) on Indigenous Peoples and Arctic Affairs, coordinator of the Federal party project “Historical Memory” in the Sakha Republic (Yakutia) Elena Golomareva, Deputy Chair of the Committee on Natural Resources and Ecology of the Krasnoyarsk Legislative Assembly Yuri Zakharinsky, Deputy Head of the Governor and the Government Office of the Chukotka Autonomous Okrug, Head of the Department for International Cooperation and the Arctic Natalia Slugina, Deputy Minister of Culture and Tourism of Magadan Region Maxim Shurkhno, and the President of the US-Russia Council Derek Norberg (USA) greeted the roundtable participants.

Very interesting presentations were made by Alexander Gorokhov, Chair of the Russian Geographical Society Branch in the Sakha Republic (Yakutia), Roman Korkishko, Head of Egvekinot City Administration of Chukotka, Mikhail Vasilev, Director of the Aviation Museum of the Sakha Republic (Yakutia), John Dalen, US/Russia Liaison, Alaska Airmen’s Association, Jeff Geer, President and Chief Pilot of the BRAVO 369 Flight Foundation Association and representative of this Association Greig Lang, Sergey Chechulin, Head of the Expeditionary Direction of the Department of Expedition Activities and Tourism Development of the Executive Directorate of the Russian Geographical Society, Melissa Chapin, Head of the Fairbanks-Yakutsk Sister Cities Committee, and others. Students and school teachers from different regions, involved in the Northern Forum activities, also shared their informative presentations.

As noted by Elena Golomareva, Coordinator of the Federal party project "Historical Memory" in the Sakha Republic (Yakutia), thanks to this project and those people who have been collecting local history materials for all these long years, and their work in the archives, a lot of documentary materials about the ALSIBG history have been preserved in Yakutia. But there are still a lot of gaps in this unique historical period; it requires more detailed study and, most importantly, involvement of the younger generation. She proposed to come up with a proposal to the Ministry of Defense of the Russian Federation on the construction of an open museum and historical complex on the territory of the Oymyakon airport to perpetuate the memory of the legendary Alaska-Siberia air route.

Deputy Chair of the Committee on Natural Resources and Ecology of the Legislative Assembly of Krasnoyarsk Krai Yuri Zakharinsky said that on May 20, 2021, the city of Krasnoyarsk was awarded the honorary title of "City of Labor Valor". Over one third of its population - 55 thousand people - were mobilized during the war years. “Having studied the materials about the Alaska-Siberia air route history, we understand what a feat people have accomplished. Pilots who, risking their lives, traveled several thousand kilometers over the taiga, and those who built this route. It should not be forgotten,” he stressed.

“We want accurate historical facts and events to be preserved in memory, so that the history of the air route and allied relations is transmitted authentically, without interpretation. The ALSIB project of the regional public organization for supporting innovative projects of Chukotka Autonomous Okrug "School of New Opportunities" is a scientific and patriotic project for students and schoolchildren, permanently implemented in Chukotka. Its goal is to restore the historical memory of the two nations” said Natalia Slugina, Head of the Department for International Cooperation and Arctic Affairs of the Governor and Government Office of Chukotka Autonomous Okrug. 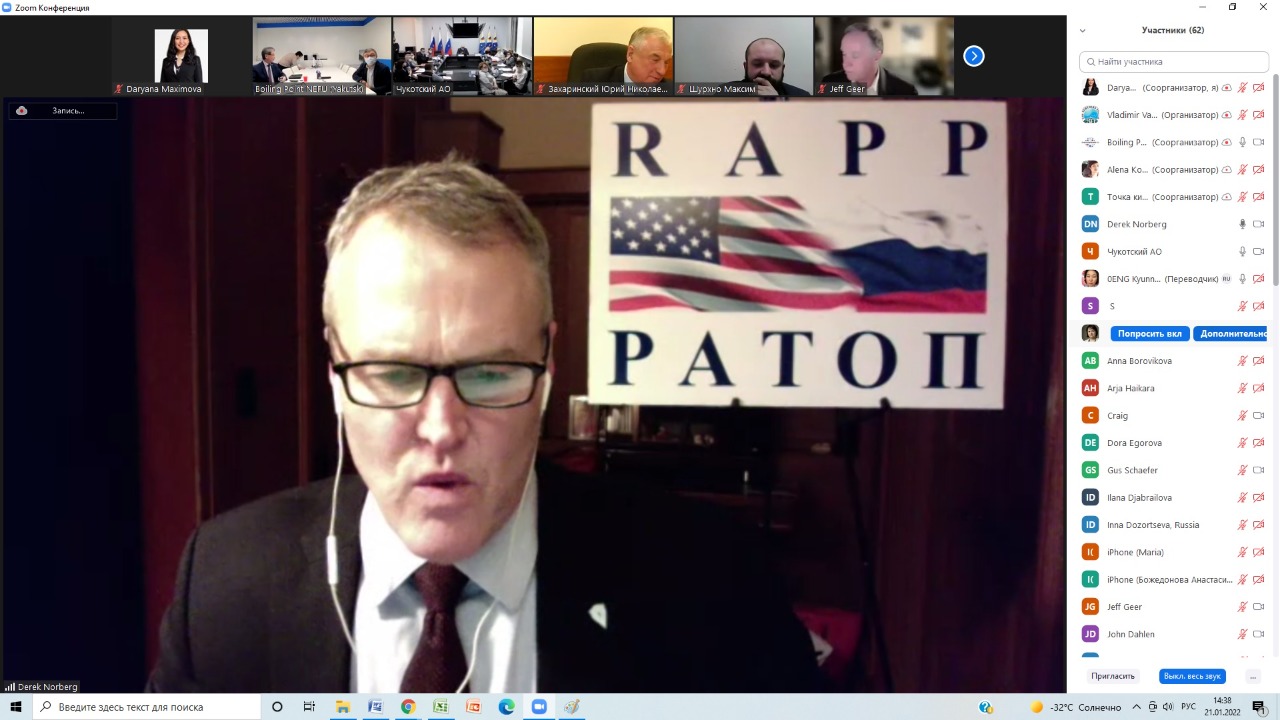 Derek Norberg (USA), President of the US-Russia Council, emphasized in his speech that

Mark Dudley, Regional Director for North America, Inter-Pacific Aviation and Marketing Inc., suggested using Yakutia Airlines flights from Yakutsk to Anchorage via Petropavlovsk-Kamchatsky this summer to participate in various events, including those dedicated to the 80th anniversary of ALSIB.

Chair of the Russian Geographical Society Branch in the Sakha Republic (Yakutia) Alexander Gorokhov and Head of the expeditionary direction of the Department of expeditionary activities and tourism development of the Executive Directorate of the Russian Geographical Society Sergey Chechulin said that in summer 2021 the Russian Geographical Society, with the support of the Russian Ministry of Defense, launched a grandiose project on a comprehensive study of the current state of the airfields of the Alaska - Siberia air route. The experts studied the condition of 15 airfields in Chukotka Autonomous Okrug, Magadan Oblast and Yakutia. Alexander Gorokhov emphasized that the work of the expedition received great feedback and served as an impetus for intensifying the study of the route, of not only the main, but also the reserve airfields. The expedition attracted the local authorities’ attention to the history of the route, there were proposals to create tourist routes along it, as well as to continue the search work, arrange the museums along the ALSIB to perpetuate the names of the ordinary workers of the route, etc. An important part of the expedition is the perpetuation of the memory of the pilots who died during the transfer of aircraft.

The Director of the Aviation Museum of the Sakha Republic (Yakutia) Mikhail Vasilev spoke about the construction of airports for the ferry route without any radio communication and meteorological support.

In his speech, Roman Korkishko, Head of Egvekinot City Administration, emphasized that today's event proves careful attitude to our common memory both from the Russian side and from our American partners.

The Director of the New Opportunities School from Chukotka Elena Dmitryuk and the school students Anya Bannikova and Mikhail Tserkovnikov spoke about the arrangements to perpetuate the memory of ALSIB heroes.

In conclusion, the participants of the roundtable supported the proposal of creating the Interregional Association of ALSIB air route and agreed to develop a resolution based on the proposals made. 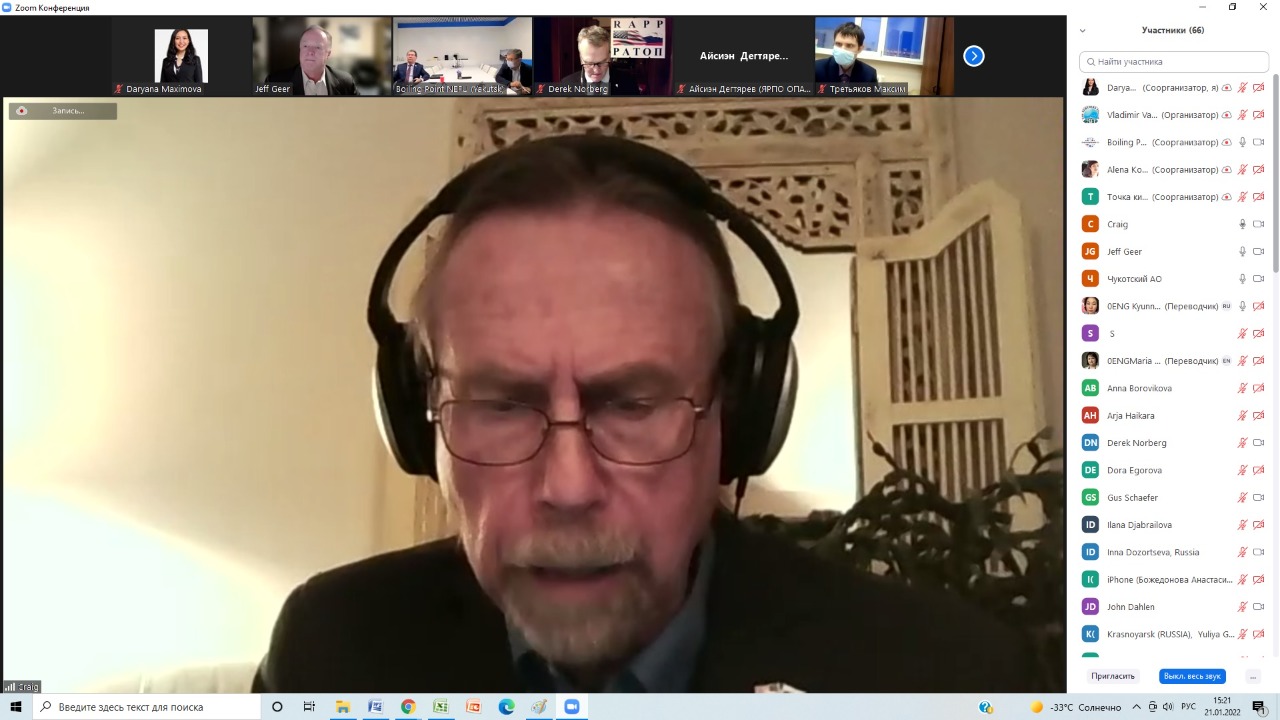 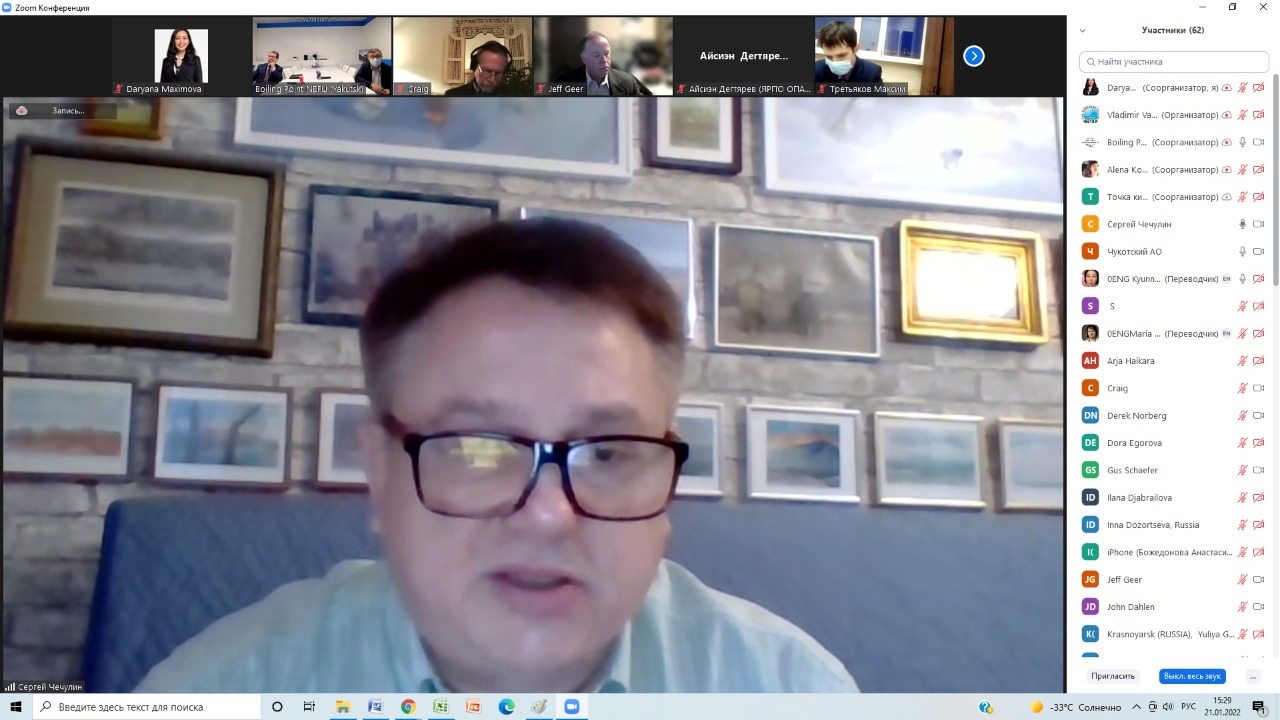 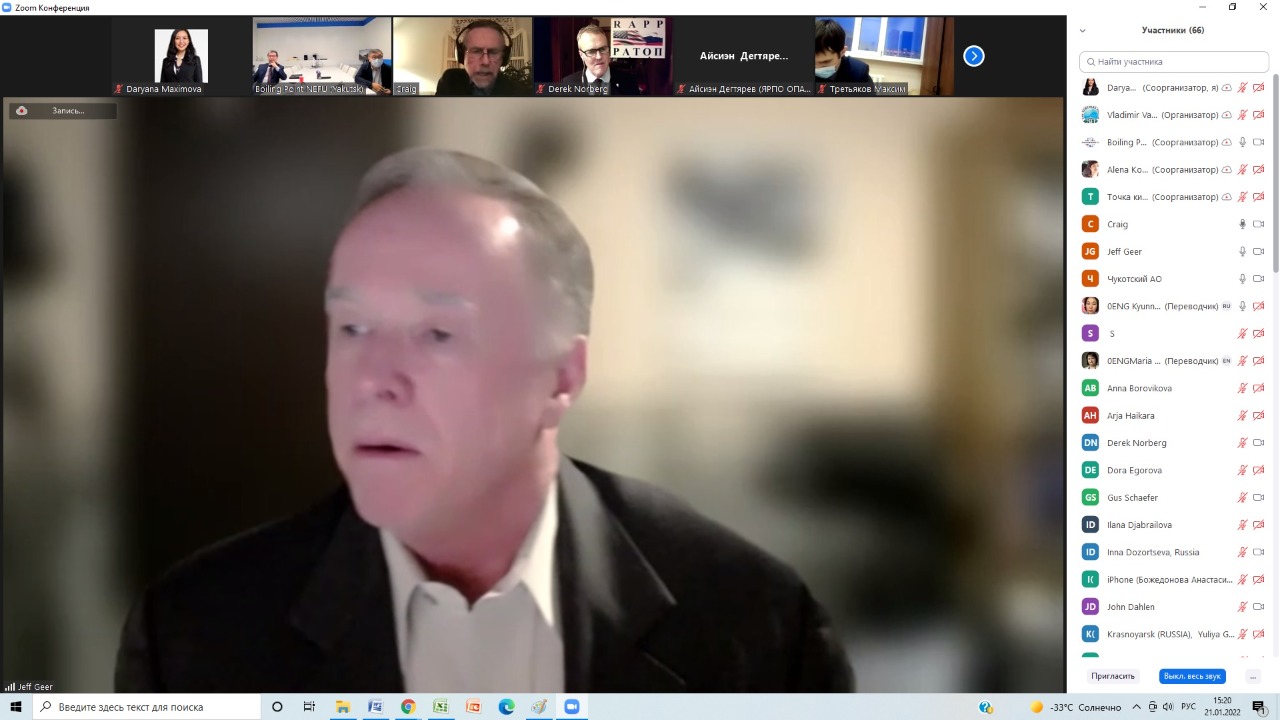 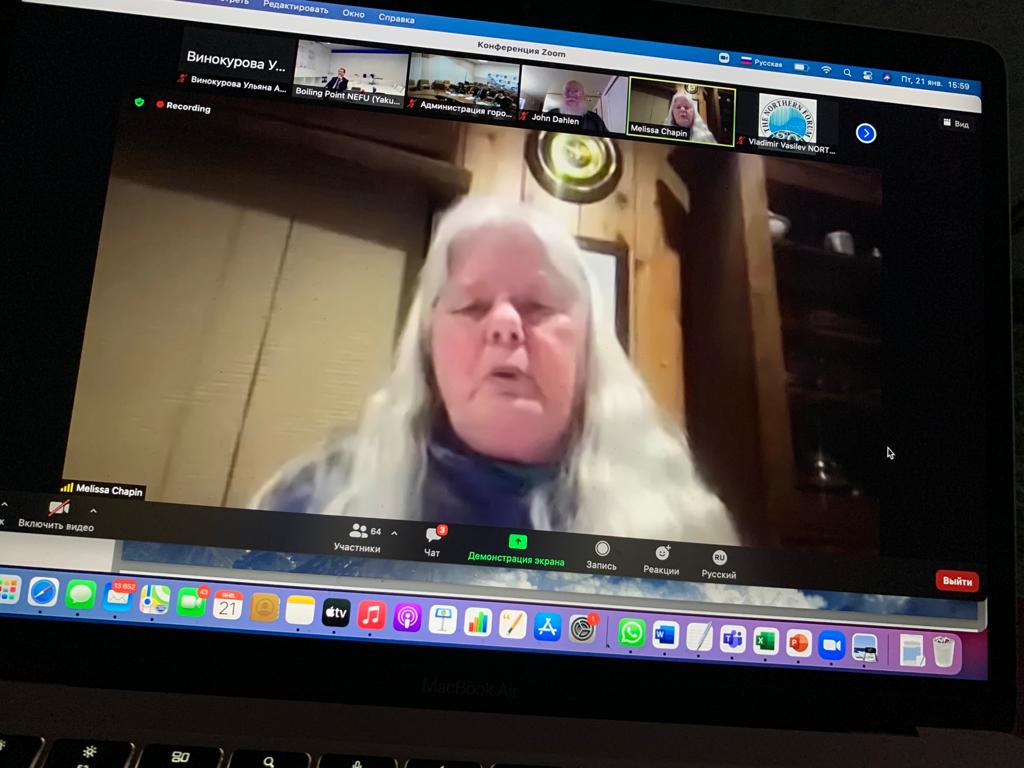 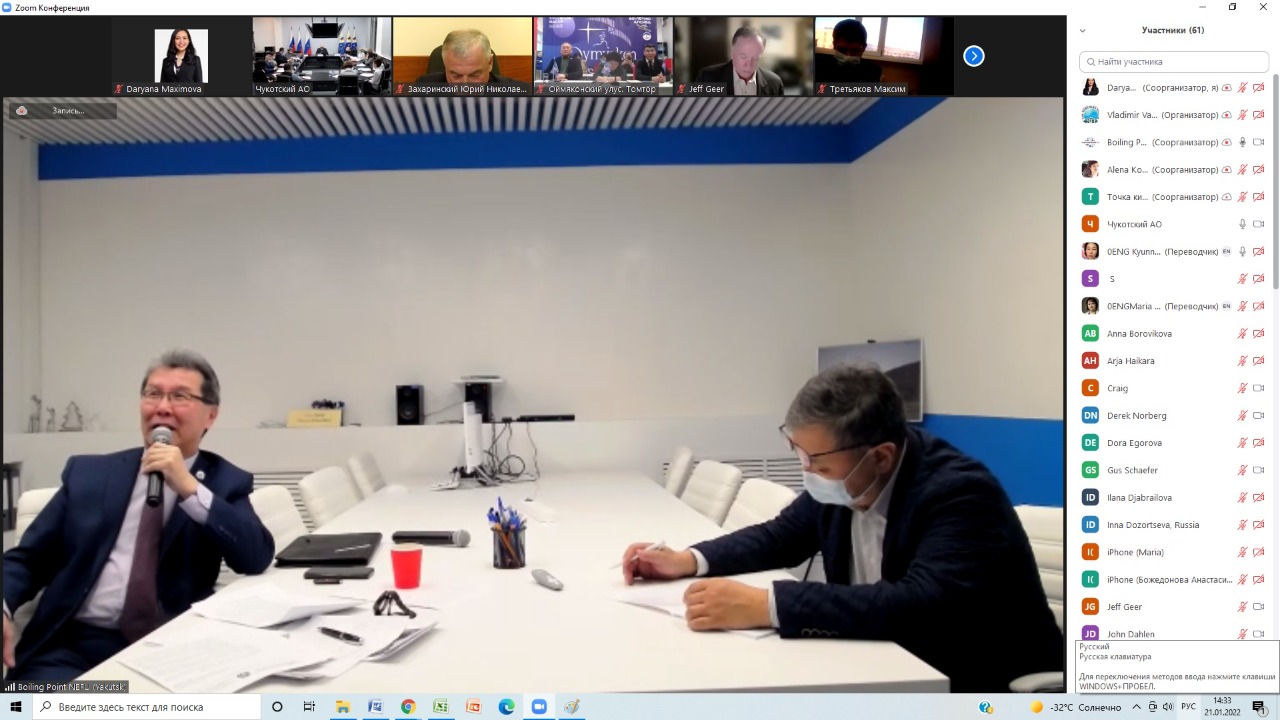 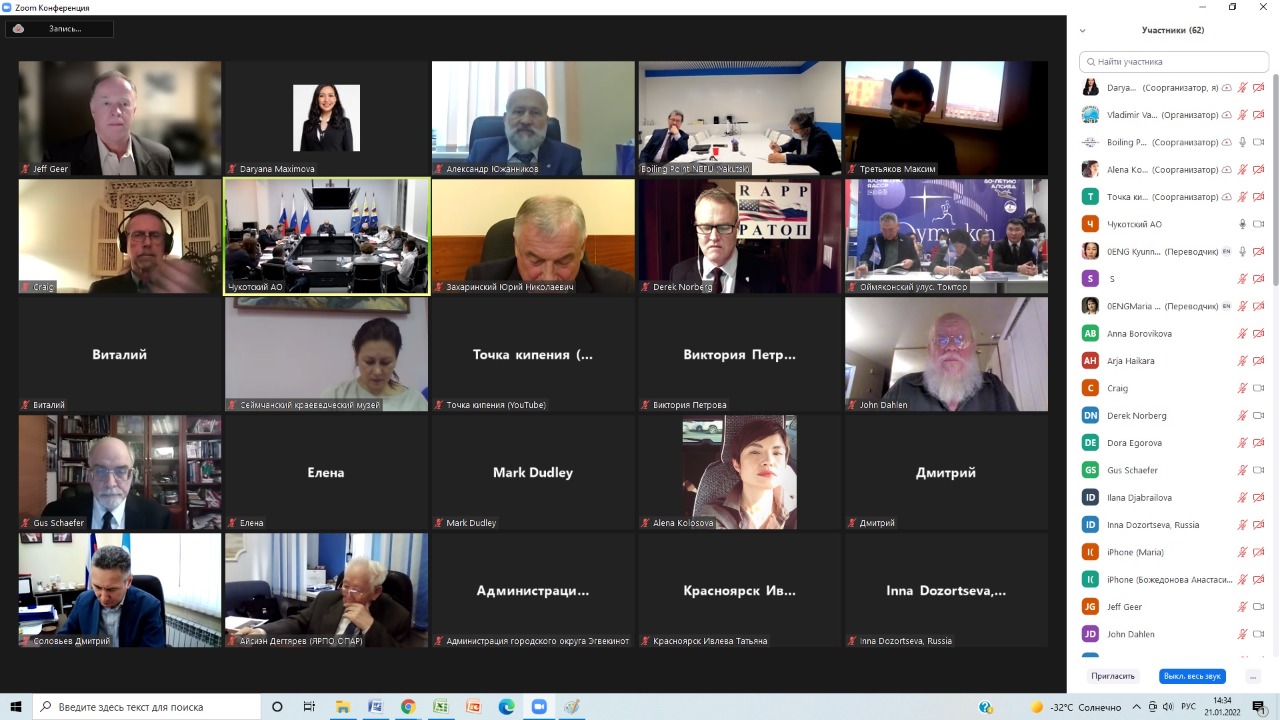 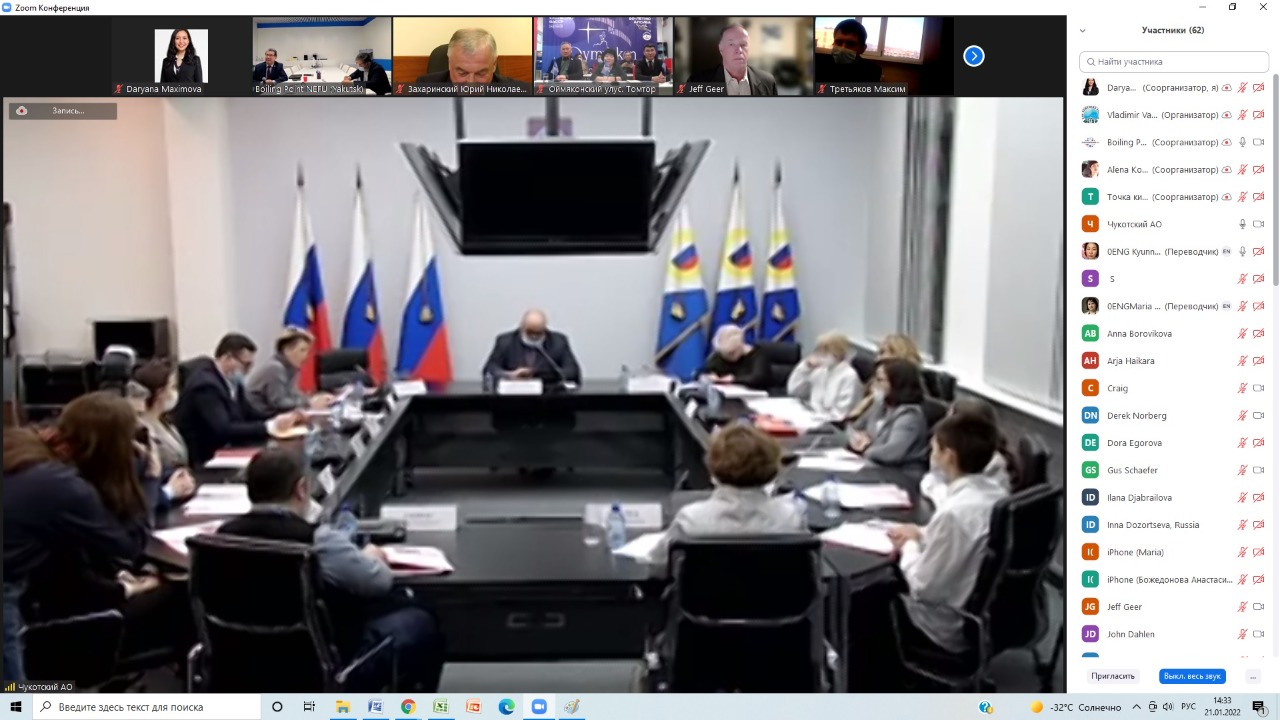 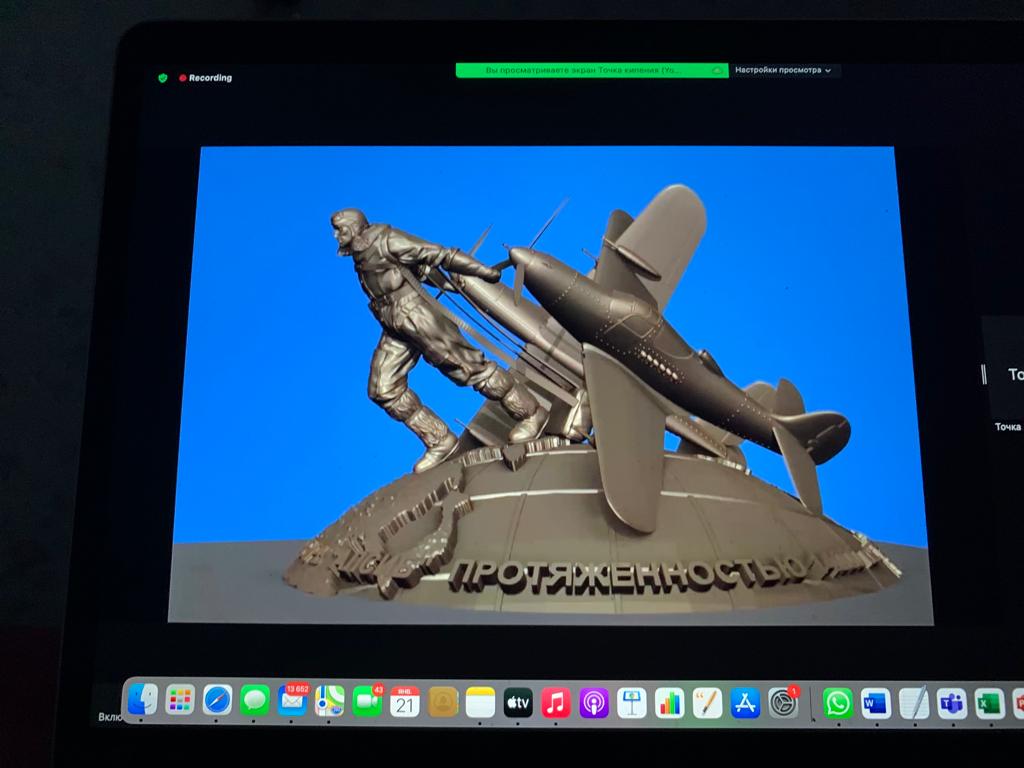 The activities of the special air route Alaska - Siberia - the front in 1942-1945 (based on the materials of the RGAE, RGASPI and the State Archive of Krasnoyarsk Krai):

In the autumn of 1941, at the Moscow conference of the countries of the anti-Hitler coalition, an agreement was signed under which the United States and Great Britain undertook to supply the Soviet Union with military equipment, including, starting from October 1, 1941, 400 aircraft monthly. At the same time, the first protocol on the military supplies until June 30, 1942was concluded between the allies. Thus, the USSR was actually included in the scope of the Lend-Lease Act, adopted by the US Congress on March 11, 1941. Formally, the terms of Lend-Lease in relation to military supplies to the USSR, starting from October 1, 1941, were consolidated somewhat later by the "Agreement between the Governments of the USSR and the USA on the principles applicable to mutual assistance in the war action against aggression", signed in Washington on June 11, 1942.

The delivery of military aircraft to the USSR could be carried out in three ways. The first is the shipment of goods by sea from the ports of the west coast of America through the Pacific and Indian oceans and the Persian Gulf (the port of Basra). This route was, on the one hand, the longest (the ships sailed for about 3 months), but, on the other hand, the safest. Another problem during its operation was that it passed over an uninhabited desert and the sand quickly damaged the engines of flight equipment. But, despite the difficulties, about 30% of all aircraft came from the allies via this route. The second way - from the east coast of America to Murmansk or Arkhangelsk was shorter, but much more dangerous, since there was a real threat of the ships’ sinking by the enemy forces. After the death of the PQ-17 polar convoy in July 1942, Great Britain stopped sending goods to the Soviet Union by this route for a long time. Therefore, special attention was paid to the third possible delivery route - the air route through Chukotka and Siberia.

The construction went on at an accelerated pace. According to the original plan, the aircraft could be accepted by December 30, 1941. Subsequently, the deadlines were adjusted, and the main work at the airfields of Kirensk, Aldan, Yakutsk, Seimchan, Berelekh and Anadyr was completed by February 1942.

The air bridge created during the war was considered an object of increased secrecy. The route attracted the attention of the German armies’ command, who were trying to find out the scheme for delivering American aircraft to the eastern front. To obtain information, many German submarines tried to pass through the Northern Sea Route to the Bering Strait area.

The first group sent to the Stalingrad front were A-20 Boston bombers. In addition to them, the R-39 Airacobra, R-63 Kingcobra, Curtis R-40 Workhawk fighters, Nord American B-25 Mitchell bombers, Douglas A-20, S- 47, and others were sent.

Thanks to the prompt actions of the intelligence officers of the Northern Directorate headed by N.A. Shilo, many pilots and planes ferrying from Anchorage (Alaska) were saved.

For various reasons, 133 aircraft crashed over the North American continent. On the ALSIB route, 73 aircraft were lost, 115 Soviet pilots died. According to the memoirs of N.A. Shilo: “there were many accidents of aircraft, and, in many cases, the squads formed for finding the crashed aircraft and providing assistance found the crashed aircraft and dead pilots, but there were many cases of forced landings in taiga, and the prompt actions of the squads saved the pilots.

From the end of 1942 until the Victory over Germany, 8090 fighters, bombers, transport and training aircraft were delivered along the Alaska-Siberia route, which accounted for about 44% of the total number of aircraft received from the USA and England.

After the victory over Germany, aircraft began to be delivered to the Far East for the war with Japan.