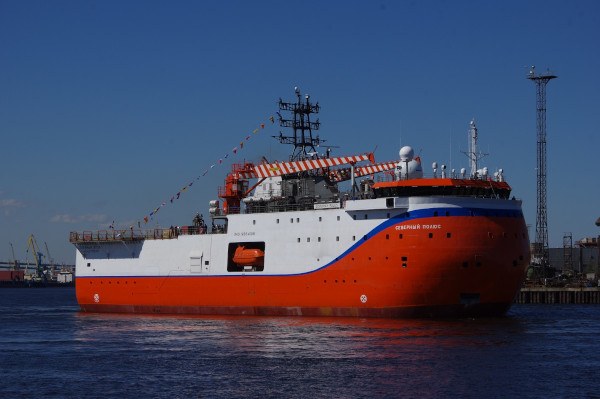 The head of the JSC noted the importance of the production process and said that LSP "North Pole" is a complex facility, the construction of which is "from scratch". The Minister of Natural Resources and Ecology of the Russian Federation emphasized that such a gift to world science can only be made by a country like Russia.

– There are no comparables of this research platform in the world, – said Alexander Kozlov.

“If we talk about those expeditions in the Arctic that took place several decades ago, it can be noted that most of the time the scientists spent fighting for survival,” said Alexander Buzakov, General Director of Admiralty Shipyards JSC. – Today, thanks to this platform, it has become possible to devote most of the time directly to science. During the tests, which will take place in the Baltic, the company's specialists will check certificates for communication, location and navigation systems, as well as check the operation of auxiliary diesel generators, the main diesel engine, service systems, auxiliary boiler plants and main ship units.

The company is building the North Pole LSP by order of the Federal Service for Hydrometeorology and Environmental Monitoring as part of the implementation of the state program for the socio-economic development of the Arctic zone.

The contract between JSC Admiralty Shipyards and Roshydromet for the construction of LSP was signed in April 2018. The project is a part of the implementation of the state program for the socio-economic development of the Arctic region of the Russian Federation.

LSP "North Pole" is designed to function as a research center and is intended for year-round expeditions in the high latitudes of the Arctic Ocean. The vessel is designed to conduct geological, acoustic, geophysical and oceanographic research; capable of passing through the ice without the involvement of an icebreaker, as well as taking on board heavy helicopters of the MI-8 AMT (Mi-17) type. The LSP will provide year round comfortable and safe working and living conditions for the crew and scientific personnel in polar environmental conditions, including at temperatures down to -50o and 85% humidity. The first expedition is expected to take place in the coming fall of 2022.

The ice-resistant self-propelled platform "North Pole" is being built to the class of the Russian Maritime Register of Shipping: KM(*) Arc5[1] AUT1-C HELIDECK-F Special purpose ship.