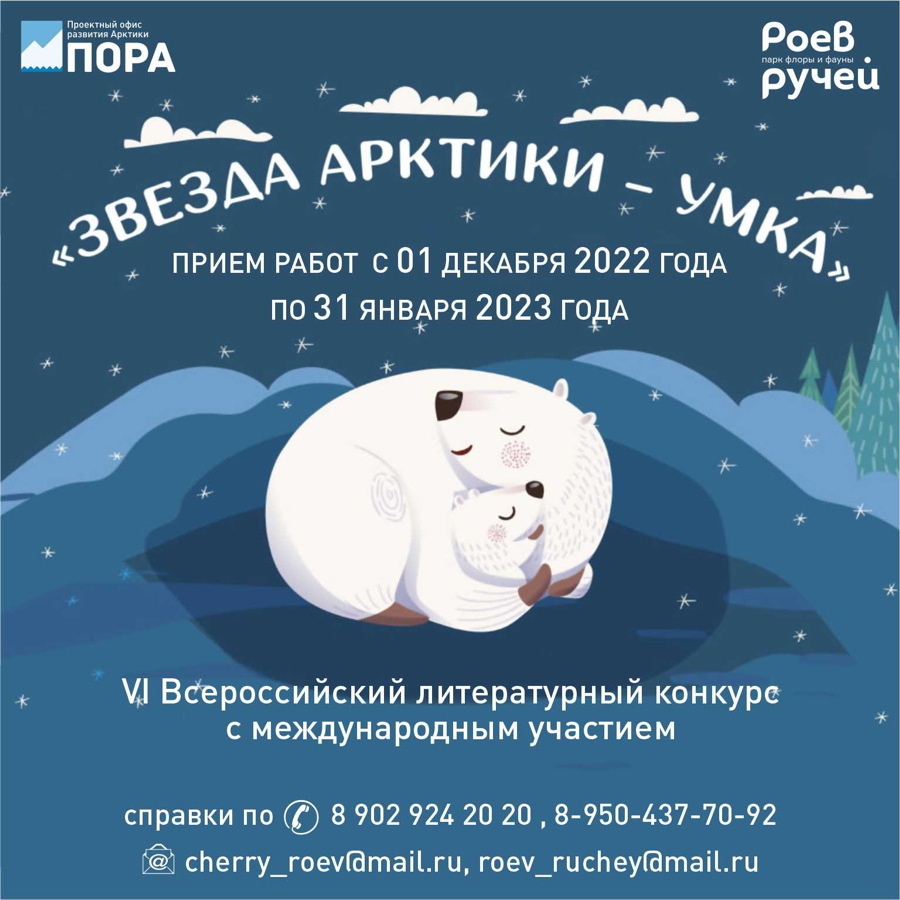 All-Russian literary competition with international participation "The Artic Star - Umka" is initiated by the "Roev Ruchey" Park with organizational and methodological support from the Main Department of Education of Krasnoyarsk City Administration and financial support from the "Project Management Office for the Development of the Arctic".

The general partner of the competition: Autonomous Non-Commercial Organization "Project Management Office for the Development of the Arctic" (Moscow)

Partners of the Competition:

The Competition is focused on the animals of the Northern Hemisphere and the symbol of Arctic - the polar bear - as a threatened species. One of the goals of the Competition is strengthening international relations between Russia and other countries based on mutual cooperation, understanding, friendship and collaborative work to preserve the nature of planet Earth.

Aims of the Competition:

from December 1, 2022 to January 31, 2023.
Competition works supplied with a filled in Application form (See Appendix to the Regulations) must be sent by January 31, 2023 in electronic format to the following
e-mail: (with the subject: “на конкурс «Умка»”.).

The results of the Competition will be published no later than March 29, 2023 in the Park’s official group on Vkontakte website: https://vk.com/roevruchey and the winners will be notified to the addresses they provided with the works.

5 to 18 year old children can participate in the Competition by providing their works in five nominations: a story, a fairy tale, a poem, an essay, a feature article.

A story - a prose work which traditionally depicts one or more events in the hero’s life. The range of characters in the story is limited; the described action is short in time.
A fairy tale - one of the genres of folklore or literature. An epic, mostly prose writing of a magical, heroic, or lifestyle nature. A fairy tale is characterized by the lack of claims to the historicity of the narrative and an obviously fictional plot.
A poem - a short work of fiction written in rhythmically arranged, usually rhymed lines.
An essay – a short piece of writing covering a certain issue that gives the author's own argument.
A feature article - a variation of a small form of epic literature — a story written in a half-documentary, half-fictional genre that describes real events and real people.

The best works will be published on the official website of the Roev Ruchey Flora and Fauna Park, in the Park’s official group on Vkontakte website (https://vk.com/roevruchey), in print media of Krasnoyarsk (by agreement with publishing houses), the winners of the Competition will be awarded diplomas and valuable gifts provided by the partners.

The format of the award ceremony will be determined by the organizers in accordance with the epidemiological situation in the region (online or offline).

The works should be submitted in a soft copy form, A4, Normal margins, font size - 12 Times New Roman, line spacing - 1.0: