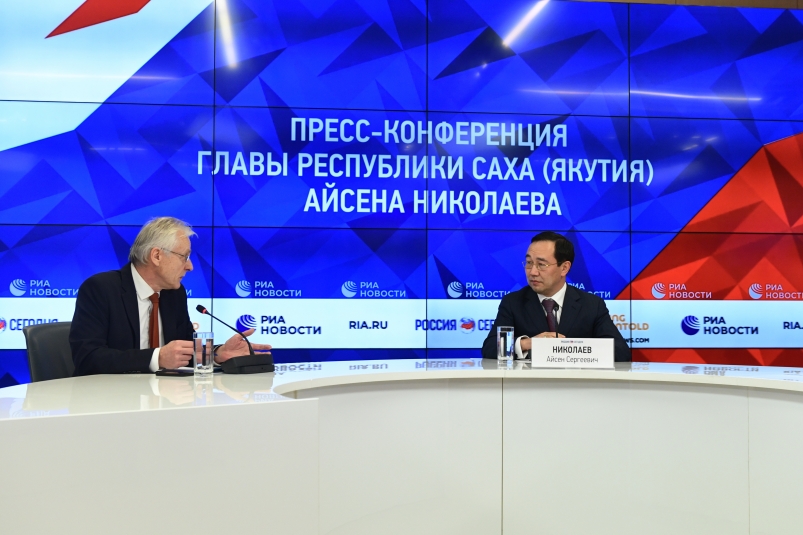 Multimedia press conference with the head of the Sakha Republic (Yakutia) Aisen Nikolaev on the topic: "Strategy for the socio-economic development of the republic until 2032 with a targeted vision until 2050" was held in Moscow on December, 9th 2019.

The head of the republic spoke about the strategic goals facing the region, tasks, key indicators, current achievements, projects, initiatives, and challenges. Particular attention was paid to the following topics: diversification of the economy, Russian and foreign investments, accelerated innovative development with reliance on the IT industry, megaprojects of the Sakha Republic (Yakutia), including a bridge across the Lena River and the Chayandinskoye gas field (within the framework of the Power of Siberia project). An assessment was given of the importance of the socio-economic development of the republic for the North-East of Russia, the Far East, and the Arctic.

During the press conference, Aisen Nikolaev in reference to the Arctic projects of Yakutia talked about the project of the Northern Forum.

“This year we launched the Northern Sustainable Development Forum (NSDF), which will be held every year. This year the forum was attended by hundreds of guests, and everyone wishes that the cultural work that is going on in our country to support the indigenous peoples of the North, culture of the peoples of the North, their approaches to ecology and the environment, requires that this becomes the global agenda” - said Aisen Nikolaev.

Link to the full press conference