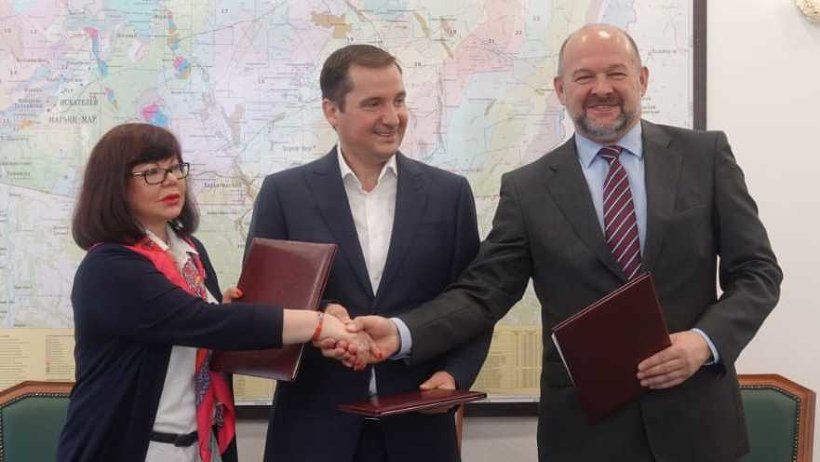 The governors of Arkhangelsk oblast Igor Orlov and Nenets Autonomous okrug Alexander Tsybulsky, as well as the rector of the Northern (Arctic) Federal University named after M.V.Lomonosov Elena Kudryashova, attended the ceremony of the agreement signing.

The need to create a research and education center in the Arctic as well as the preparedness of the project was discussed the day before during a business breakfast.

“Today strategic cooperation of Arkhangelsk oblast and Nenets Autonomous okrug in the field of education development and the search for new solutions in the Arctic is fixed by an agreement. And it allows us to talk about our interaction not only as an obvious fact but also at the official level. Thus, we declare to the whole world that we are together, we are strong and ready to move on in matters the Arctic zone development,” said Igor Orlov.

An increase in the number of partners in the research and education center creation will improve the quality of education and training of personnel to the world level in order to form and increase the investment potential of the Arkhangelsk Oblast and the Nenets Autonomous Okrug when introducing joint scientific developments.

"Cooperation between Arkhangelsk oblast and Nenets Autonomous Okrug is traditionally very close. It has existed for a long time and it does not need additional confirmations, including documentary ones. Nevertheless, we are starting a new project, and this fact is important to formalize. We can definitely be useful to each other: NARFU is the basic organization that can provide us with competencies in higher education, scientific research, and we are ready to integrate into this production chain and offer our territory in order to work out and introduce new developments in the sectors represented in the NAO" - shared Alexander Tsybulsky.

The main interaction areas between the parties are also identified. It includes materials and technologies for shipbuilding and marine Arctic technology, mining, human life in the Arctic, forest and water bioresources of the Arctic zone of the Russian Federation.

Press Service of the Governor and Government of the Arkhangelsk Oblast