In September, the Northern Sustainable Development Forum will be launched in Yakutsk. The Forum is being held in Yakutsk for the first time and claims to become one of the leading platforms for discussing the problems and prospects of sustainable development of the Arctic and the implementation of practically significant projects within the framework of the Northern Forum international organization. We will talk about the significance of the upcoming event and preparations for it today with the acting Executive Director of the Northern Forum international organization Daryana Maximova.

- Daryana Dmitrievna, tell us how the idea of ​​creating the Northern Sustainable Development Forum was born?

- The idea of ​​this forum arose a year ago when Vladimir Nikolaevich Vasilyev, the 1st Deputy Minister for External Relations and Affairs of the Peoples of the Republic of Sakha (Yakutia) and I came up with this idea - and the idea was born within the same organization that I am currently in. A call for projects was held within the Northern Forum, and Vladimir Nikolaevich is one of the leaders of the Northern Forum working groups on regional adaptation to climate change, while I was and still am the Executive Director of the “University of the Arctic Resource Support Center” - an autonomous non-profit organization, which was created by North-Eastern Federal University. The idea itself was to create an international platform that would deal with the problems of the North-Eastern part of the Arctic, since the largest international platforms are mainly located in the West, and in the East, there is no such platform, not only in Russia but even in the world. The main concept that immediately occurred to us was to unite Asia and the Arctic - because, now, we are talking a lot about the interest of Asian countries in the Arctic and the North. The second idea was to draw attention to the Northern Forum international organization since our event is called the Northern Sustainable Development Forum. Well, the third idea - and probably the most global one - is to bring up the UN Sustainable Development Goals that were approved in 2015. There are 17 of them - this is a sufficient number that you need to think about since these are different problems. To summarize, we can say that these are three main areas - economics, ecology, and population, which the people of the Arctic need to think about.

- Are there similar events in the world? And what is the uniqueness of this particular Forum?

- Yes, there are similar events in the world. They are large-scale and global, which attracts experts from all over the world. In fact, there are not so many of them. The three largest can be listed – they are the “Arctic Circle” in Reykjavik (Iceland), which takes place annually; “Arctic Frontiers”, which takes place in Tromsø (Norway). And, of course, the international Arctic forum “The Arctic: Territory of Dialogue” which, in due time, took place in Arkhangelsk, and this year in St. Petersburg. These are the three forums that we were looking up to while writing the concept of our future forum in September. We believe that we too could reach such a level in the future.

- The Arctic is a fairly relevant topic today, everyone is interested in it. What is the role of the forum in the development of the North and the Arctic?

- The role of the forum in the development of the North and the Arctic can be very significant since we are creating a new platform. We were guided by previous experience, but we believe that in this case, the Northern Forum can play a very significant role in a variety of contacts since the Northern Forum is an international organization uniting regions, not countries. In total, the organization includes 14 regions: of which ten are Russian regions. Among the foreigner regions, we have Alaska (USA), Akureyri (Iceland), Lapland (Finland), Gangwon-do province (Republic of Korea). Therefore, the idea is to unite interregional cooperation in the framework of this event, so that the Northern Sustainable Development Forum unites not only interstate contacts, but also interregional ones. Therefore, we received a very large public and expert response, despite the fact that we did not conduct such a large PR-company. It turned out very well that the participants responded specifically to the opportunity to express their opinion, ideas, projects. We are more focused on project activities that will develop in the future. And, the most interesting thing that attracts everyone is - the ongoing work. That implies that we provide not only the “get-together”, but wish to continue work throughout the year on projects that will be announced. The forum provides not only the format of conferences, although there will be classic conferences, as well as workshops, lectures, presentations of projects - in general, what we will continue to do throughout of the year with Northern Forum international organization. Moreover, the Northern Sustainable Development Forum will be held annually.

- Since delegations from China, Japan, and South Korea are expected, I would like to ask a question - what contribution can Asian countries make to the development of the forum?

- Thank you very much for the question, since this is just the thing that we are going to do. Indeed, for now, we take only these three countries - we call them Northeast Asia according to the macro-region. Of course, these countries are very interested - probably many have heard about this - that Asian countries are interested in the northern sea route, the natural resources of the Arctic. But, thanks to the Northern Sustainable Development Forum, we want to draw their attention not only to currently relevant issues but also to our pressing issues that we have in the northern region, including Yakutia, that we may have economic development connected with social development and future environmental issues that concern us. We want to draw the attention of the delegations to sustainable development so that they would deal with all issues of the North and the Arctic as a whole.

- What issues and problems will be prioritized?

- The priority will be given, first of all, to the issues of indigenous peoples who live in the territory, here we also take the population of the Arctic. We say that the population of the Arctic is only four million worldwide, of which two and a half million live in Russia. This is a very large number of all the circumpolar countries. Of course, we want to pay attention first of all to the population. There are also interesting topics on the security of investment in the Arctic - the Russian Council on Foreign Affairs has offered us such a topic. This is the corporate social responsibility of future investors in the region who will come and will have to tell us to develop the economy. And we are going to find out how they will do it and how the ecology will develop at the same time. Of course, the broad question is about ecology, there will be issues related to wildlife, climate change. Climate change is a very global topic that we want to put at the forefront of our forum. We will also discuss the economy, without wouldn’t be a conversation without it. Now a lot of countries, not only Asian but also circumpolar, are engaged precisely in the socio-economic development of the regions. In this case, Yakutia may be such a center where we can discuss it. All of this has been developed precisely to draw attention to our problems, since our territory is in permafrost, and this problem has not been fully studied. Of course, there are many gaps in science. We really want science to address these gaps in the first place. So that, based on the results of the forum, we will launch scientific and practical projects, so that science interacts with officials, with business, and with the public.

Currently, among the participants, we have announced the participation of organizations such as the World Wide Fund for Nature, representatives of the Arctic Council will also come. In addition, we have the Arctic Development Project Office (PORA), which recently signed an agreement with the Ministry of the Russian Federation on the development of the Far East and the Arctic. We also have the full support of the Ministry of the Russian Federation for the development of the Far East and the Arctic, and they are also going to attend the forum. It is gratifying that regions will come to the forum. In this case, interregional cooperation is also of interest to everyone - how are we going to carry it out. There are not enough contacts not only with foreign regions but also with our regions, which are our neighbors. How we will communicate with them is of the interest. Everything will turn out very significantly, we are working on it.

- The last question, Daryana Dmitrievna, how will the forum affect our Republic?

- Our republic, in this case, will be the center, so we think. Of course, in Northern Forum there are other regions that are also interested in holding this forum. We plan that we will return this forum once every two years to Yakutia. And, in between, we’ll transfer it to other regions of the Northern Forum. Many people support his idea. And, in this case, the fact that such a pilot project is being held in Yakutia should be of interest to the international and Russian public, officials and business to the problems of Yakutia that are present here, namely in the North and the Arctic. In general, a lot has been said that Yakutia may become a transportation hub in the future. In matters related to the Northern Sea Route, we also talk a lot about the fact that Yakutia can also play a very big role since the railway came and cargo can be transported along the Lena River. Asian countries have shown great interest because of such an opportunity that may arise in the future in Yakutia. Therefore, we want to get ahead of the events and draw attention to other problems that exist in the region, including the problems of poverty that exist in the North and the Arctic, problems of accumulated environmental damage, environmental problems, in particular, climate change and thawing permafrost. This can play a very large role not only for Yakutia, but also for Russia, which can pay attention to Yakutia, and, in general, to international-interregional cooperation, which can begin in Yakutia. So everything is going very well.

Among the participants, from outside Yakutia, 200 guests will come. Of these, slightly less than half are foreigners (about 70 people). We hope that this forum will arouse great interest in the future, and Yakutia will be such a center that will begin an inter-regional discussion. We want officials, business, the public and, of course, science to communicate, which I talked about a lot. Everything should start with science. Scientific and practical projects we will continue in the future. Due to the fact that I was recently appointed acting Executive Director of the Northern Forum, namely, from July 1, we want to continue to do all this within the framework of the Northern Forum.

- Daryana Dmitrievna, I wish you a successful launch of the forum! 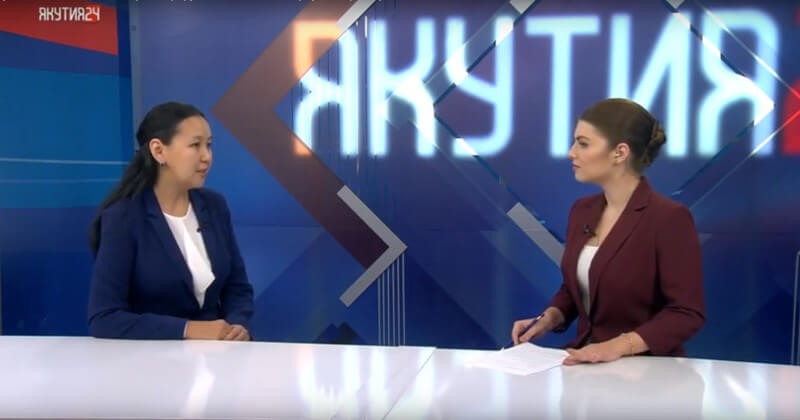