Russian Land of Permafrost and Mammoths Is Thawing

YAKUTSK, Russia — The lab assistant reached into the freezer and lifted out a football-size object in a tattered plastic grocery bag, unwrapping its muddy covering and placing it on a wooden table. It was the severed head of a wolf.

The animal, with bared teeth and mottled fur, appeared ready to lunge. But it had been glowering for some 32,000 years — preserved in the permafrost, 65 feet underground in Yakutia in northeastern Siberia.

As the Arctic, including much of Siberia, warms at least twice as fast as the rest of the world, the permafrost — permanently frozen ground — is thawing. Oddities like the wolf’s head have been emerging more frequently in a land already known for spitting out frozen woolly mammoths whole.

The thawing of the permafrost — along with other changes triggered by global warming — is reshaping this incredibly remote region sometimes called the Kingdom of Winter. It is one of the coldest inhabited places on earth, and huge; Yakutia, if independent, would be the world's eighth largest country.

The loss of permafrost deforms the landscape itself, knocking down houses and barns. The migration patterns of animals hunted for centuries are shifting, and severe floods wreak havoc almost every spring. 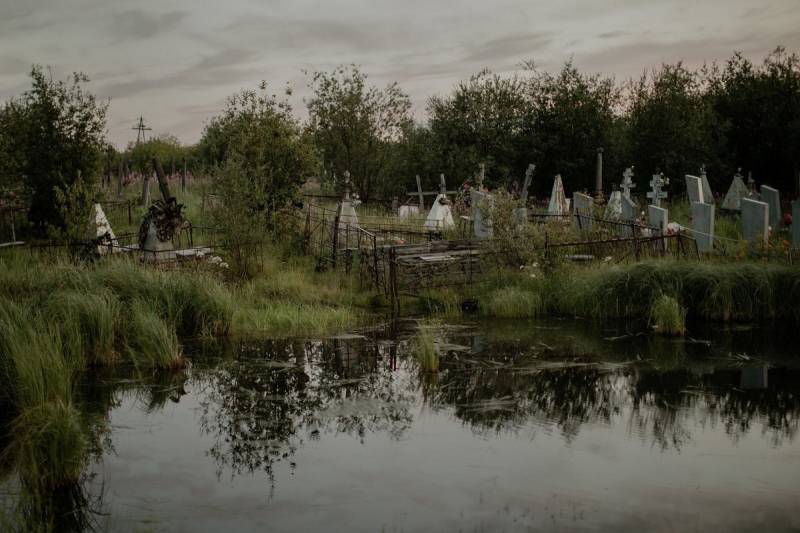 Water has inundated the cemetery in Srednekolymsk, shifting the graves. 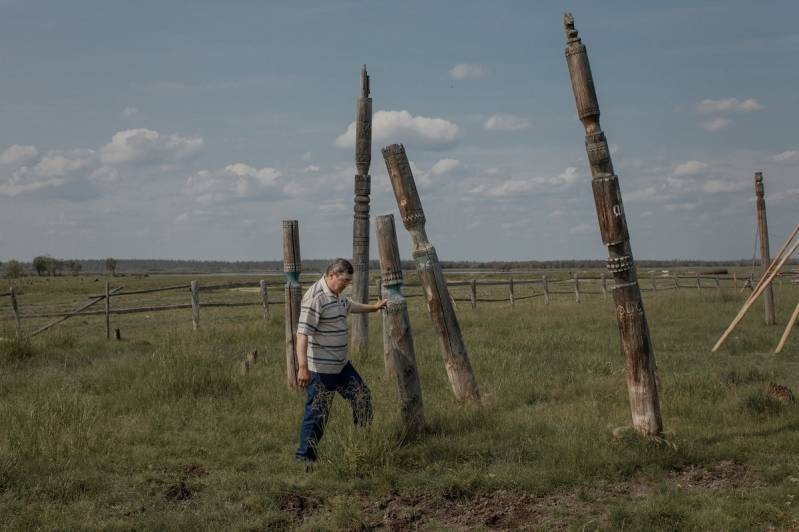 Vasily P. Okoneshnikov, 54, the head of the village of Nalimsk, inspecting a pole used to tie horses. Due to frequent floods, the poles no longer stand straight, but some, considered sacred, cannot be righted.

“Everything is changing, people are trying to figure out how to adapt,” said Afanasiy V. Kudrin, 63, a farmer in Nalimsk, a village of 525 people above the Arctic Circle. “We need the cold to come back, but it just gets warmer and warmer and warmer.”

Climate change is a global phenomenon, but the shifts are especially pronounced in Russia, where permafrost covers some two-thirds of the country at depths ranging up to almost a mile.

“People don’t comprehend the scale of this change, and our government is not even thinking about it,” said Aleksandr N. Fedorov, deputy director of the Melnikov Permafrost Institute, a research body in Yakutsk, the regional capital. 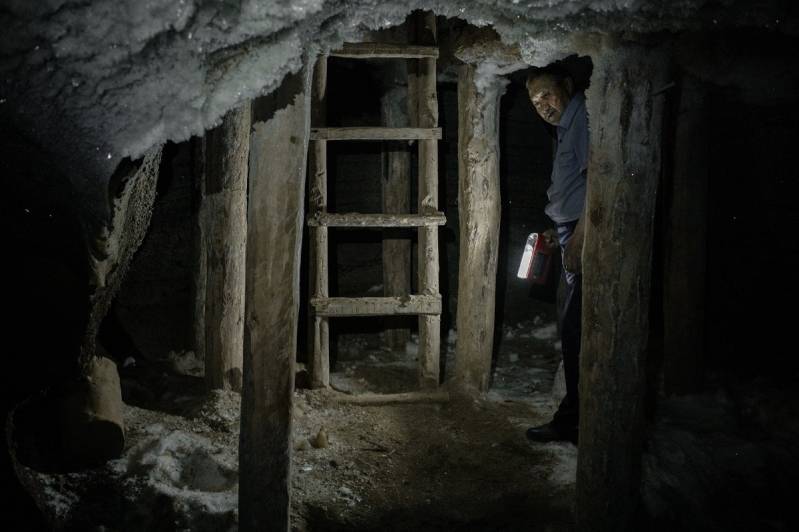 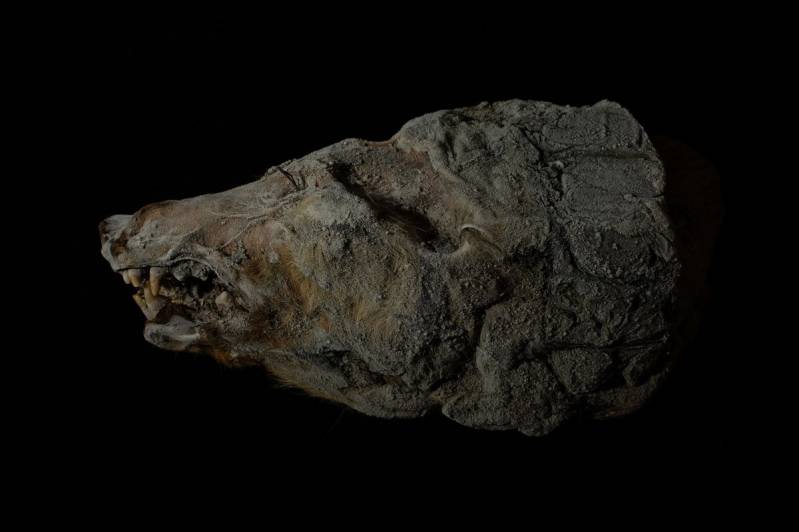 A 32,000-year-old wolf head, which had been frozen in permafrost 65 feet underground.

In Yakutia, almost 20 percent of Russia, distances are vast and transportation erratic. The population is just under one million. Natives joke that every resident could claim one lake.

Yakutia’s 33 districts are the size of countries. In the far northeast, the Srednekolymsk district, which lies entirely above the Arctic Circle, is slightly smaller than Greece. Just 8,000 residents live in 10 villages, including 3,500 in the capital, also Srednekolymsk.

The region has been a synonym for remote for centuries. Empress Elizabeth exiled the first prominent political prisoner to Srednekolymsk in 1744, when it took a year to reach overland from St. Petersburg. There are just two main highways transiting Yakutia, with the one built mostly by Gulag prisoners under Communism still largely unpaved.

In Srednekolymsk, summer used to last from June 1 to Sept. 1, but now extends a couple weeks longer on both ends. Outsiders might not notice that the thermometer in January often hovers around -50 F, rather than -75 F. Residents call -50 “chilly.” 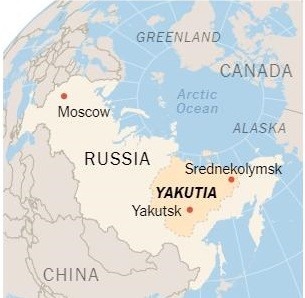 In a regionwide pattern, the average annual temperature in Yakutsk has risen more than four degrees, to 18.5 F from 14 F, over several decades, said Mr. Fedorov of the permafrost institute.

Warmer winters and longer summers are steadily thawing the frozen earth that covers 90 percent of Yakutia. The top layer that thaws in summer and freezes in winter can extend down as far as 10 feet where three feet used to be the maximum.

Eroding cliffs on riverbanks expose other areas, like where the wolf head appeared, that had long been deeply buried. 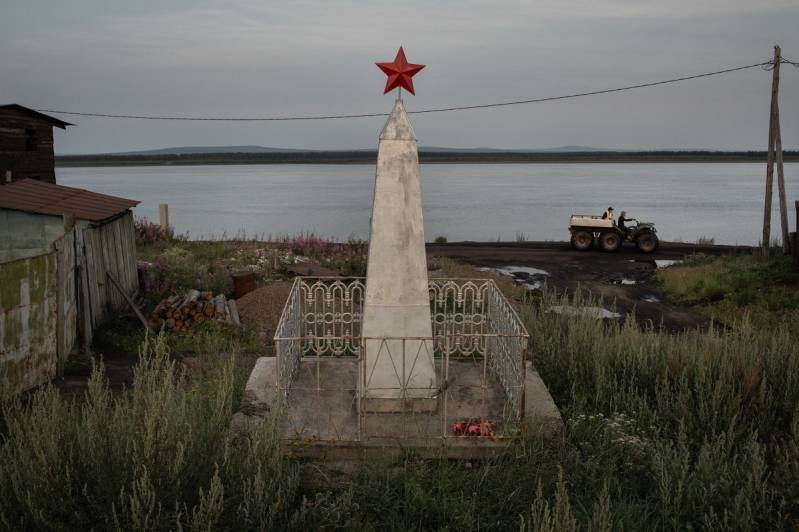 A Soviet-era memorial to honor political prisoners exiled to Srednekolymsk under Tsarist rule. 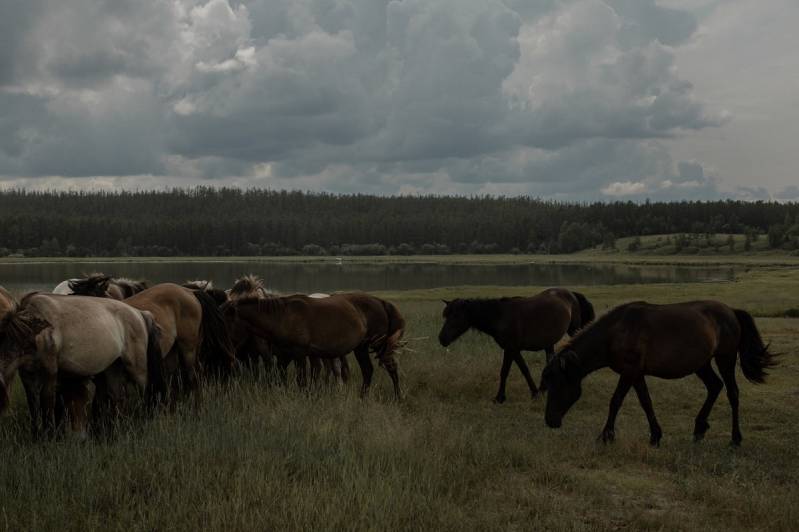 Across Yakutia, farmers have replaced tens of thousands of cows with native horses who eat less hay, but produce less milk. The market for their meat is limited.

The thawing permafrost, and increased precipitation, have made the land wetter. The snow and rain create a vicious circle, forming an insulating layer that speeds defrosting underground.

Water backing up behind ice floes now causes ravaging floods virtually every May.

In Srednekolymsk last year, floods swamped the dirt airstrip, with its separate outhouses for men and women. Often battered Soviet turboprops are the lifeline to the world, but the airstrip had to close for a week.

Plump black Turpan ducks used to arrive regularly during the first week of June. This year migrating birds began to descend on May 1. There were far fewer Turpans, and suddenly geese, a novelty. 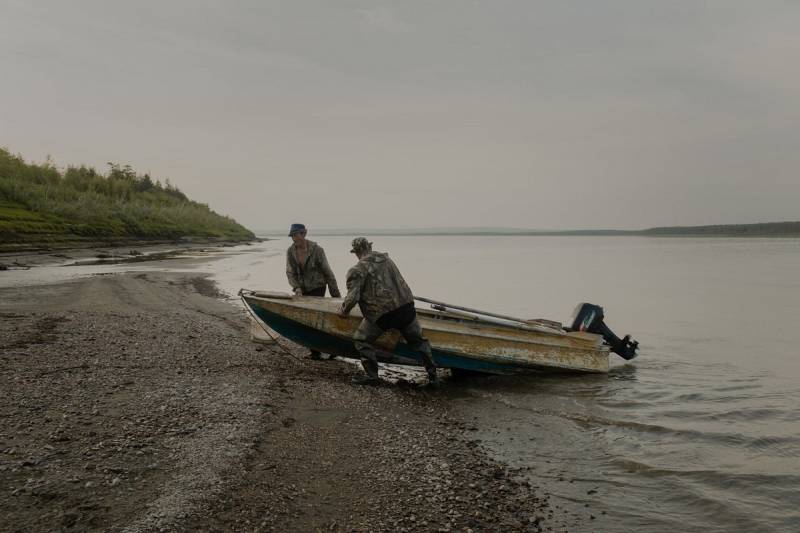 Fishermen hauling their boat off the Kolyma River in northeastern Yakutia around 9 p.m., during the summer nights when the sun never entirely sets. 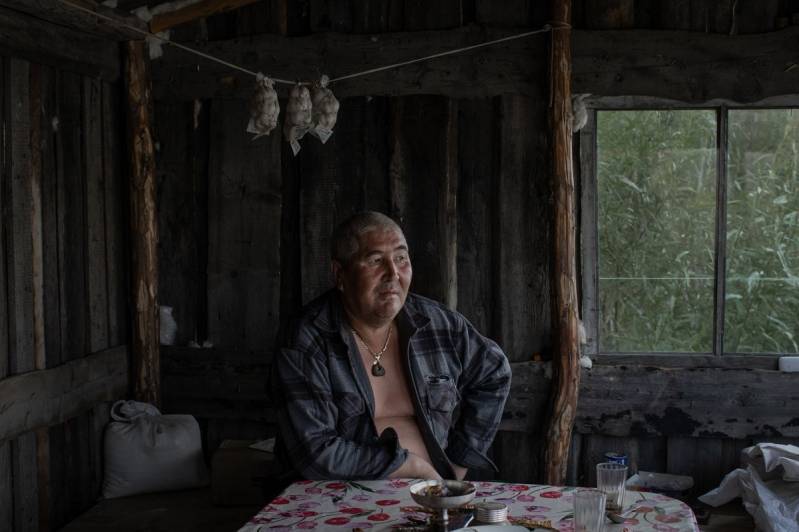 Appolinariy H. Popov, 55, built his small fisherman’s hut in Vyatkino, north of Srednekolymsk, on a bluff overlooking the Kolyma River because floods swept away many similar structures closer to the water.

Elsewhere, the migration routes of wild reindeer have shifted, while unfamiliar insects and plants inhabit the woods.

Nalimsk hunters once stored their fish and game in a 22-foot deep cave dug out of the permafrost, a kind of natural freezer. Now its thawing walls drip water, and the meat rots.

“We buy meat and it is no good, too dry,” Mr. Okoneshnikov said. “We have no choice, even if it’s shameful” to shop, rather than hunt.

The village of Beryozovka has flooded virtually every spring for a decade, its 300 residents forced onto boats for weeks to run errands like buying bread. They finally accepted a five-year project to move the village 900 yards uphill.

In the district, Beryozovka has the only concentration of Even people, one of various dwindling indigenous tribes.

The Even, who are reindeer herders, were settled only in 1954 through a government drive. They speak a distinct language; individual clans inherit ancestral songs.

“At some point they talked about abandoning the village, but people did not want to move out,” said Octyabrina R. Novoseltseva, chairwoman of the Northern Indigenous People’s Association in the Srednekolymsk region. “They would lose everything, the culture would all disappear.” 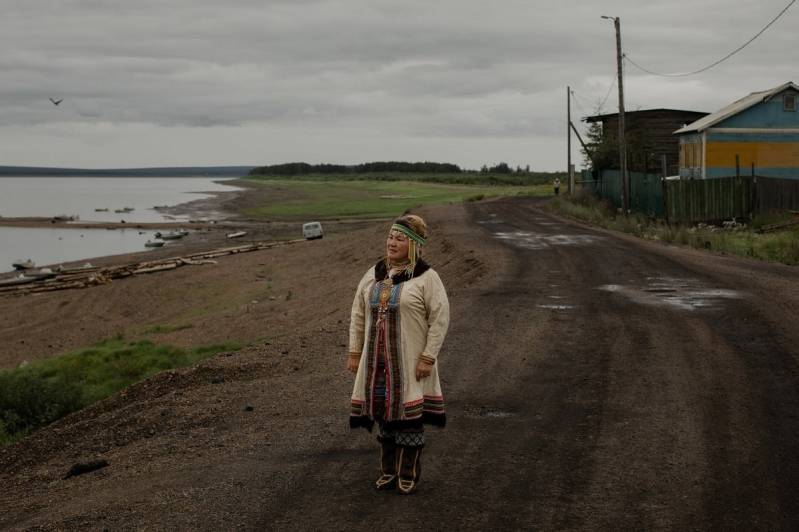 “At some point they talked about abandoning the village, but people did not want to move out,” said Octyabrina R. Novoseltseva, the chairwoman of the Northern Indigenous People’s Association in the Srednekolymsk region. 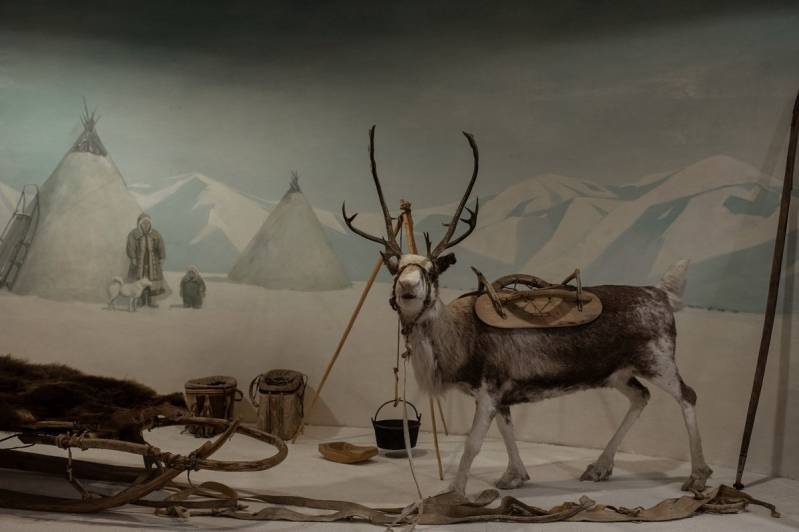 An exhibition at the Museum of Archaelogy and Ethnography in Yakutsk displays ancient life of indigenous people in Yakutia. Various small, indigenous tribes, who have herded reindeer for centuries, are under threat as global warming thaws the permafrost.

The government in distant Moscow is an abstract concept. Alaska is closer. Villagers throughout Yakutia bemoan relying on their own resources to adapt to climate change.

Even state-run institutions like the permafrost institute lack the means for the complicated field work needed to assess the full extent of permafrost loss. Nor can they gauge other fallout, like how much methane that microbes in the newly thawed ground produce, adding to global warming.

“We do not really monitor the situation, so we just have to see what it brings,” said Yevgeny M. Sleptsov, the head of the Srednekolymsk district, as he piloted a fishing boat along the Kolyma River at 10 p.m. in the muted light of the endless Arctic day.

The government is also unable to do much about other environmental problems, including wildfires surging through millions of acres of remote forest across Yakutia and the rest of Siberia. Reaching them is too costly. 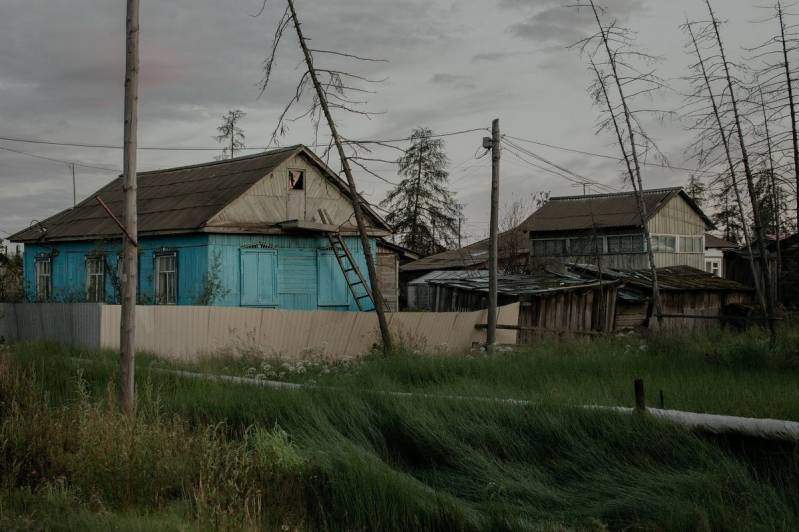 The north side of Srednekolymsk regularly gets flooded during the spring. 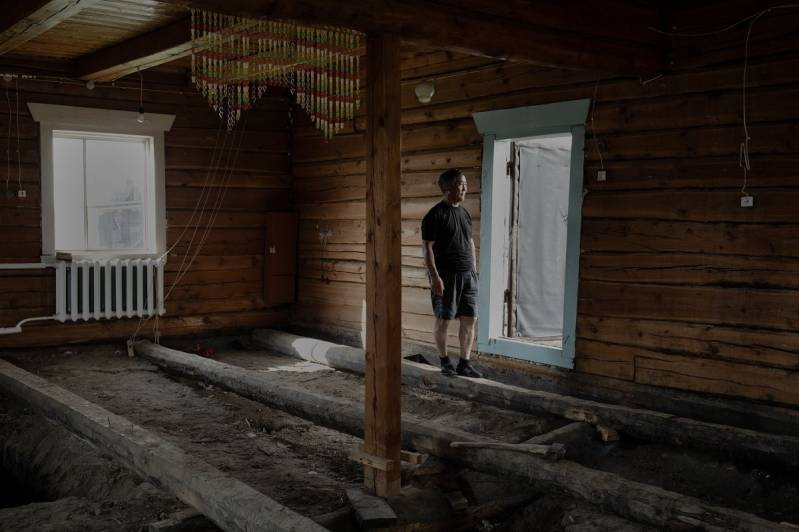 Ivan D. Trofimov, a 63-year-old farmer, inside his old house in the central village of Usun-Kyuyol. The house sank due to melting permafrost.

In 1901, the first woolly mammoth discovered whole in the permafrost emerged from a riverbank near Srednekolymsk, an event immortalized with a stylized red mammoth on the town’s shield.

But thawing permafrost is exposing more of the huge hairy beasts, which roamed a more temperate northern Siberia 10,000 years ago. And with agriculture and hunting unreliable, more locals are looking for them.

Digging for mammoths is illegal, so the hunters are secretive, but one ivory tusk sold to China can earn $16,000 — enough to live on for a year.

Tusk hunters unearthed the Pleistocene wolf head stored in the Department of Mammoth Studies at the Academy of Science in Yakutsk.

As the permafrost thaws across Yakutia, some land sinks, transforming the terrain into an obstacle course of hummocks and craters — called thermokarst. It can sink further to become swamps, then lakes. From the air, thermokarst looks as if giant warts are plaguing the earth. It makes plowing or grazing on formerly flat fields impossible. 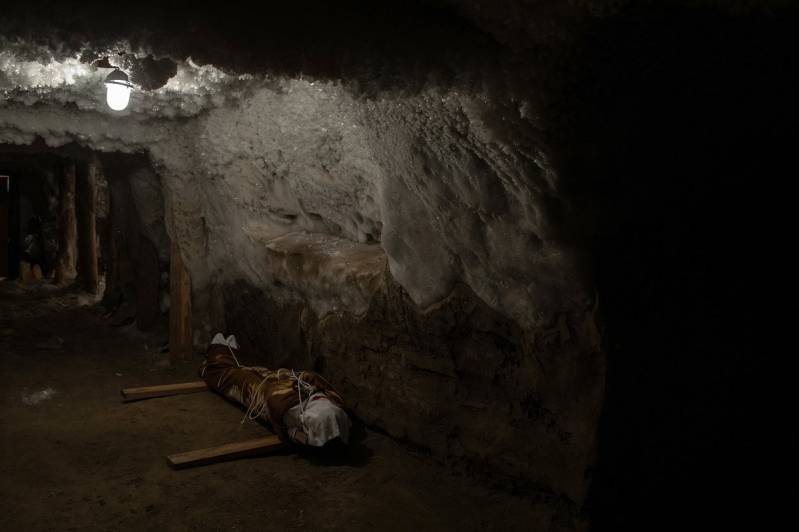 In Srednekolymsk, after a local veteran of the war in eastern Ukraine went berserk, shooting dead a police officer and then himself, the police preserved his corpse in an old natural freezer carved out of the underground permafrost. 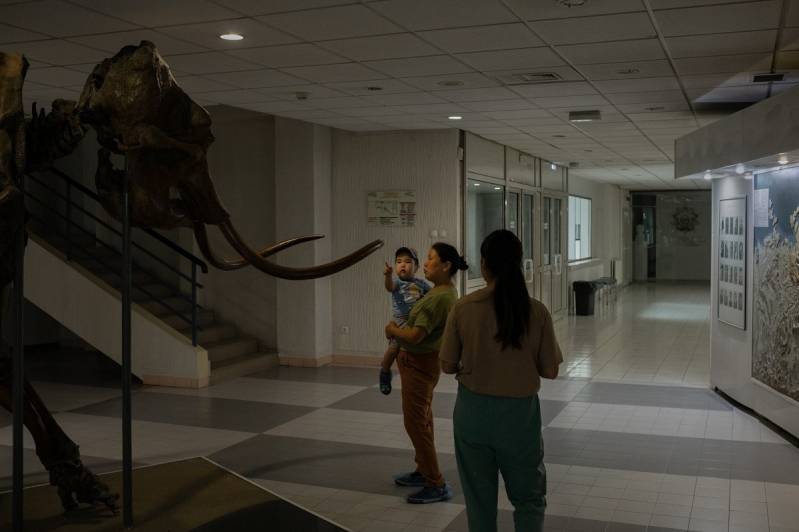 The skeleton of a mammoth in the lobby that the Museum of Archaelogy and Ethnography shares with the Museum of Mammoths in Yakutsk.

Thirty-three families once inhabited the northern part of Usun-Kyuyol, a village of 750 people. After their cow barns and fences repeatedly collapsed, 10 families decamped. Those remaining feel beleaguered.

Across Yakutia, farmers have replaced tens of thousands of cows with native horses. Horses consume less hay, but produce less milk, and the market for their meat is limited. They also die in droves when their hooves cannot penetrate thicker snow and ice to forage.

Nikolai S. Makarkov, 62, is building a new house. He tired of jacking up his old one after it sank four times so that the doors would not open. Water also seeped underneath, rotting the floorboards and freezing in winter, chilling the interior.

Years ago, the village road ran straight, with log cabins and cow barns arrayed along its length. Now the potholed muddy track meandering among the hummocks barely resembles a road. Abandoned houses tilt at odd angles.

“There might as well have been a war here,” said Mr. Makarkov, whose new house is raised off the ground on pillars sunk 16 feet, where there is still permafrost. “Soon there will be no flat land left in this village. I only have 30-40 years to live, so hopefully my new house will last that long.” 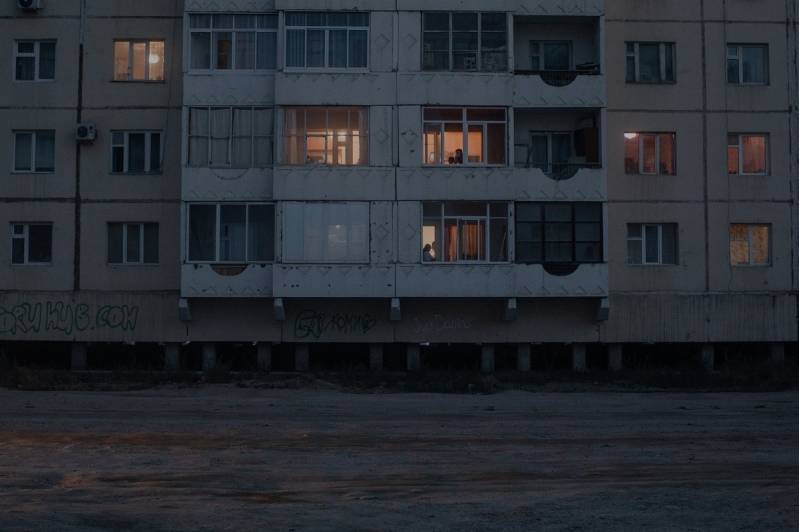 In Yakutsk more than 1,000 buildings have been destroyed as global warming melts the permafrost under the foundations of buildings. This structure is on stilts to try to prevent its heat from melting the permafrost.

Photography by Emile Ducke for The New York Times