The resilience of the Arctic fox leave Scientists 'thunderstruck'

The Independent published an article written by Emma Snaith about a young Arctic fox that left researchers "thunderstruck" after it walked hundreds of miles across the ice from Norway’s Svalbard islands to northern Canada in a record of 76 days.

The female fox that scientists from Norway’s Polar Institute fitted with tracking device covered 3,506km (2,179 miles) since it was freed into the wild in March last year. Traveling across sea ice and glaciers at an an average of 46.3km per day and on one day alone it managed 155km. The previous known record was held by an adult male fox tracked in Alaska who traveled 113km in one day.

The animal was under a year old when she set off from the island of Spitsbergen in search of food. “This is the fastest movement rate recorded for this species,” the Polar Institute's research paper on the fox’s journey stated. "We couldn’t believe our eyes at first,” Eva Fuglei of the Polar Institute told Norway's public broadcaster NRK. “We thought perhaps it was dead, or had been carried there on a boat, but there were no boats in the area. We were quite thunderstruck.”

The fox completed her journey in two legs, reaching Greenland after traveling across 1,512km of sea ice in 21 days. She arrived on Canada’s Ellesmere island in July after walking a further 2,000km over 76 days. The researchers noted that she slowed down significantly on two occasions in northern Greenland. They think she may have curled up in the snow to wait out bad weather or found a source of food. When she arrived on Ellesmere island, the fox will have switched her diet from “marine food resources” to mostly lemmings, the scientists said.

Arctic foxes are incredibly hardy animals that can survive temperatures as low as -50C. They have furry-soled paws, short ears, and a short muzzle to help them survive in cold climates.

The ultimate fate of the fox is unknown as her transmitter stopped working in February this year. 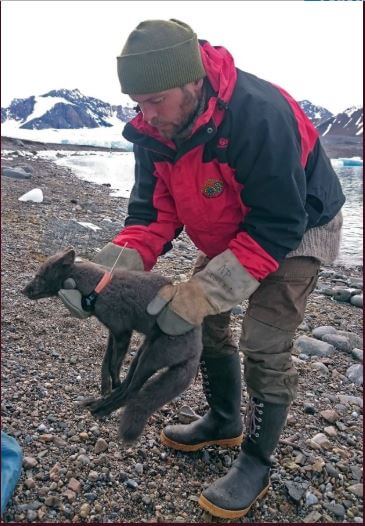