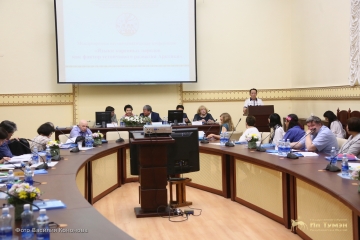 The International Scientific Сonference “Indigenous languages as a factor of the sustainable development of the Arctic” is held in Yakutsk on June 27-29, 2019.

Sections and round tables of the conference are organized at the National Library of the Sakha Republic (Yakutia), the Institute for Humanities Research and Indigenous Studies of the North, Siberian Branch of Russian Academy of Sciences, and the Museum of History of Yakutia.

Theprogram of the first day included sections “Indigenous Languages: Problems of Interaction, Typology and Functioning”, "Folklore and Literature as an Oral and Written Type of Translation of the “Languages of Culture”, “Linguistic landscape of the North and the Arctic: ethnological and sociocultural context”, “Musical Folklore of the Peoples of the Arctic: Problems of Study, Preservation, Adaptation”, “The role of libraries in the preservation of language diversity”.

The next day started with round table “Minority languages in the era of globalization: the effectiveness of modern practices of indigenous communities, the role of innovative technologies in the revival of indigenous languages”.

During the work of this round table, the Head of Department of UNESCO at the NEFU Anatoly Zhozhikov made a presentation on a project of digitalization of the languages and culture of the indigenous people of the Arctic. This project is an initiative of the UNESCO Department at the NEFU and the Sakha Republic (Yakutia), and it is planned to be submitted it to the Arctic Council for consideration through the Northern Forum.

Many presentations were made within the framework of sections “Languages, Folklore and Literature of Indigenous Peoples of the Arctic”, “Cultural Heritage and Traditional Knowledge of Indigenous Peoples of the Arctic as a Creative Resource for the Development of the Northern Territories “The Role of Libraries in Preserving Language Variety and round table “Problems of promoting the reading of literature of the indigenous peoples of the North, Siberia and the Far East".

It is important to note that more than 90 poster presentations were presented at the conference.

Following the conference, it is planned to publish a collection of articles. The articles will be published in the national bibliographic database of scientific citation Russian Science Citation Index (http://elibrary.ru).