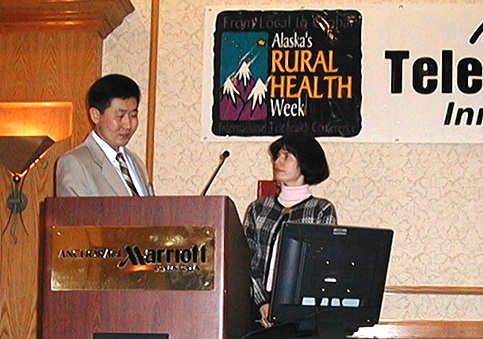 A meeting of the Northern Forum’s Working Group on Health in the North and Social Issues will be held within the framework of the Northern Forum’s Regional Coordinators Committee (RCC) meeting in Naryan-Mar on November 22-23, 2018. The meeting is timed to the III International Conference on Telemedicine, which is held every 2 years under the patronage of the Governor and the Government of the Nenets Autonomous Okrug (Regional Policy Department of the Nenets Autonomous Okrug).

In Russia a large-scale state policy on development of telemedicine technologies started with the instructions given by President of the Russian Federation Vladimir Putin to Government of the Russian Federation after a meeting of the State Council Presidium on September 18, 2013. Instructions say: to take measures to increase the availability of medical care to people, expand the possibilities for its provision, including development of air ambulance services and use of mobile medical teams and telemedicine.

Health care is one of the fundamental social areas, which contributes to strengthening the social security of the population. The first innovation task “The development strategy of the Arctic zone of the Russian Federation and national security for the period up to 2020” highlights a need to implement a new resource-saving technologies and technical solutions in the social sphere,

to incorporate portable telemedicine complexes into medical practice. This complexes will help doctors to consult patients from a distance, and it will serve to increase the availability and improve the quality of medical care.

Sakha republic (Yakutia) is an example of socio-economic importance of telemedicine. Sakha Republic (Yakutia) has a vast territory and huge distances (Area in total: 3,083,523 km2), extreme climatic conditions in its arctic and northern zones.

According to a member of the Working Group on Health in the North and Social Issues, Head of the Telemedicine Center of the Republican Center for Disaster Medicine of the Ministry of Health of the Republic of Sakha (Yakutia), Northern Forum’s project “Telemedicine” coordinator Matvey Nikolayev:

“Development of telemedicine has a particular socio-economic importance for northern regions residents - out of 70 thousand villagers who have no other choice than get on a plane to hospitals and dispensaries in Yakutsk city, only about 30% (about 21,000) receive inpatient treatment at the hospitals of Yakutsk, and 70% of patients after diagnostics and counseling return for at the place of residence. The population of the northern regions of Sakha Republic spends more than seven hundred million rubles every year only to get in Yakutsk and receive a medical care.

In our republic, telemedicine will ensure availability of medical care regardless of the extreme conditions in the Arctic. The telemedicine has proved in many countries of the world that with its help 70–80% of patients’ diseases can be diagnosed and treated at the place of residence, therefore, transporting patients is not always necessary. Another benefit is that the residents of these countries have virtual access to any doctor”- said Matvey Nikolaev.

The working group on health in the North and social issues includes specialists from the following member regions of the Northern Forum: