Feodosia Gabysheva about participation in the SDWG meeting 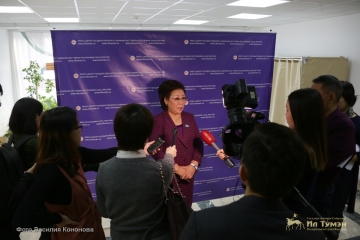 Mrs Feodosia Gabysheva spoke on the participation in a working meeting of the Arctic Council’s Sustainable Development Working Group (SDWG).

The meeting between the eight Arctic States and the six Permanent Participants representing the Indigenous peoples of the Arctic was held in Rovaniemi, Finnish Lapland, on October 29, 2018.

At the SDWG working meeting issues on improving circumpolar networks, and innovative technologies to support development of indigenous peoples in changing North and Arctic were considered.

A project “International Arctic School”, supported by the Northern Forum member regions and leaded by Mrs. Feodosia Gabysheva, is facing following tasks and challenges: providing high quality of education, successful adaptation and comprehensive growth of students from the Arctic countries through the individual educational process, organization of lifelong learning and international cooperation. With the Northern Forum’s project, during the meeting, a project "Children of the Arctic. Pre-school education” was presented by Anna Polezhaeva, a chief of the Protocol and International Relations department of the Federal Agency for the Affairs of Nationalities of the Russian Federation

In addition, meetings with representatives of the Federal Agency for Nationalities Affairs, the Association of Indigenous Peoples of the North and the Far East, representatives of Canada and Finland on the International Arctic School Project’s Road Map and consolidated report preparation issues were held; Possible deadlines for submitting proposals for the plan in January and May 2019 were discussed.

It should be noted that the authorities of Sakha Repablic (Yakutia), in cooperation with private partners, are planning to build an International Arctic School in the Republic. A building designed for 220 students is putting up on the basis of a Center for Children Recreation and Rehabilitation “Sosnovy Bor” in Yakutsk. The school is a driver of the innovation network development of educational institutions in Sakha Republic (Yakutia), supporting the basic principles and substantive directions of international education programs along with the federal state educational standard of general education. Specialists from Moscow, St. Petersburg, Kazakhstan, as well as native speakers from foreign countries will be invited.

“Some people, unfortunately, mistakenly believe that this school will be an exclusively paid educational institution for the “elite”, and this, of course, is not true. I assure you that this will be a state institution, in which, along with federal state educational standards, students will be invited to study the programs of the International Baccalaureate (IB). At the same time, the school will earn money using its intellectual potential” - said Mrs. Feodosia Gabysheva.

She also noticed: “The International Arctic School will help our children to integrate into the global space. Not all parents have an opportunity to let their children to study abroad, so they need possibilities to get an international education in their native land, and these possibilities must be created for them. It will be a unique experience. In other countries education is mainly bilingual, we will give children an opportunity to learn not only their native and foreign languages, but also languages of the indigenous peoples of the North and the Arctic”.

At the end, Mrs. Feodosia Gabysheva noted, that one of the main conditions for national revival is raising competitive, responsible citizens, capable of lifelong learning, aimed at serving people and developing the Northern and Arctic region basing on intercultural understanding and respect.