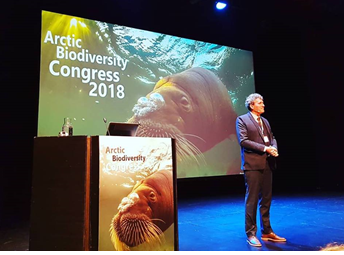 Completed a major event in the field of ecology of the Arctic countries and regions - the Congress on Arctic biodiversity - 2018, organized by the Working Group of the Arctic Council CAFF (Conservation of Flora and Fauna Conservation) - Executive Secretary Tom Barry.

The congress was held in the region of the Northern Forum of the Province of Lapland (Governor Mikka Riipi). The Government of Lapland and the University of Lapland have done a great deal of organizational work and put considerable resources into holding such a representative event in a comfortable working environment.

Within the framework of the Congress, the Northern Forum held its international event - “Youth Eco-Forum - 2018” on the topic “Voice of the youth of the northern regions for the conservation of biodiversity” and a meeting of the Working Group on Environment and Biodiversity.

The Executive Director of the Northern Forum, Mikhail Pogodaev, and the Chairman of the Working Group on Environment and Biodiversity, Minister of Sakha Republic (Russia) Sakhamin Afanasyev, participated in the work sessions of the Congress.

Below is an overview of the main events of the Congress, based on materials from the official information site: http://enb.iisd.org/biodiv/arctic/congress/2018/

The Arctic Biodiversity Congress 2018 started its work in Rovaniemi, the province of the Lapland of Finland on Tuesday, October 9.

Sauli Niinistö, President of the Republic of Finland, welcomed participants underlining the need to foster interactions between scientists and policy makers. He highlighted that the Arctic is not isolated from the rest of the globe, pointing to the region’s role as breeding ground for migratory birds. Niinistö also emphasized that climate change should not only be in the headlines when a new report by the Intergovernmental Panel on Climate Change (IPCC) is published, but needs to “stay firmly on the agenda for the foreseeable future.”In the morning, participants attended a plenary session entitled “Our knowledge, Our actions: addressing biodiversity conservation in a changing Arctic,” which highlighted the significant consequences of climate change in the Arctic region, discussed mechanisms to foster co-production between scientists and traditional knowledge holders, and emphasized the need to engage industry actors. In the afternoon, the group of almost 500 participants divided itself among several parallel sessions discussing, inter alia:

In the evening, there was a showcase of short films such as “Our Shared Heritage: Arctic Breeding Birds in the Yellow Sea.”

View of the panel during the plenary session.

On Wednesday, 10 October, participants of the Arctic Biodiversity Congress 2018 gathered in Rovaniemi, Finland, to attend the second day of the event. In the morning several parallel sessions took place on some of the following items:

During lunch time, participants were invited to join a session titled “Beyond the Blue Planet: Frozen Worlds” hosted by the British Broadcasting Corporation (BBC) Natural History Unit, which called for input from scientists, and Indigenous Peoples and local communities for preparing the new TV series on cryosphere regions. In the afternoon, the plenary session “the Arctic in a Global Context: Biodiversity Targets, Sustainable Development Goals and a Post-2020 Agenda” underscored the transformational character of the Sustainable Development Goals (SDGs), which ensures that sustainable development is no longer a matter of only environmental ministries, pointing, inter alia, to the increased engagement of the private sector. Panellists also highlighted the need to “keep it simple” when communicating research findings. Following this debate, the Arctic Economic Council Investments and Infrastructure Working Group hosted a session on responsible investment in the Arctic. Parallel sessions in the afternoon then addressed, among other issues:

At the end of the day, participants attended a poster session and were welcomed at the Pilke Science Center for a reception.

On Thursday, 11 October, participants of the Arctic Biodiversity Congress 2018 gathered in Rovaniemi, Finland, to attend the third day of the event. In the morning, several parallel sessions took place on, among other things, the following items:

During lunchtime, participants were invited to join a poetry session, and the afternoon featured parallel sessions on: wetlands, conservation and sustainable harvest, freshwater systems, shipping, and the involvement of youth in Arctic conservation.The afternoon continued with a report from the Arctic Youth Summit, and a panel session featuring a discussion between Arctic Environment Ministers and other government representatives from the Arctic states.

On Friday, 12 October, the Arctic Biodiversity Congress 2018 gathered in Rovaniemi, Finland, for the last day of the event. In the morning, participants attended parallel sessions, discussing:

To conclude the congress, a final session was convened to share thoughts on main lessons from the event and ideas about the way forward. Neville Ash, UN Environment World Conservation Monitoring Centre (UNEP-WCMC), emphasized the congress took a broad view of biodiversity and acknowledged the mutual reinforcement of sustainable use and conservation. Tom Barry, CAFF, said the congress successfully fostered vibrant discussions among a diversity of actors. He noted discussions are underway to hold a third edition of the congress, highlighting it would provide a great opportunity to assess the status of Arctic biodiversity halfway through the ten year timeline for tackling climate change identified in the recent Intergovernmental Panel on Climate Change (IPCC) report.Closing the event, Aulikki Alanen, Ministry of Environment, Finland, lauded participants for having “truly lived the Rovaniemi spirit of strong environmental protection in the Arctic.”

IISD Reporting Services, through its ENB+ Meeting Coverage, provided daily digital coverage and will provide a summary report from the Arctic Biodiversity Congress 2018.