Halldór Jóhannsson: In Iceland, there are many myths and beliefs related to water 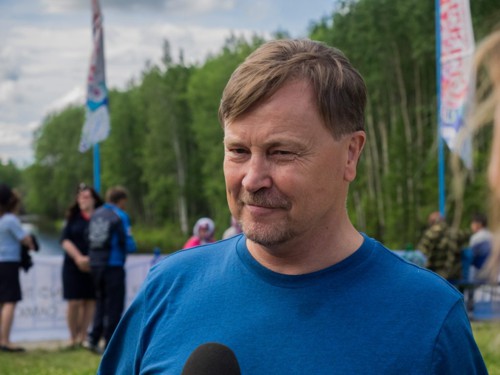 At the International Oblas (hollowed log boat) Rowing Competitions that ended the day before, athletes fought hard for the highest places on the podium. However, for some participants, the Governor's Cup was the only opportunity to try themselves in oblas rowing. One of these people was the director of Arctic portal, the representative of Iceland, Halldór Jóhannsson, who shared his impressions of the event and Ugra in general with the press service of UgraMegaSport.

- Halldór, please share your first associations that arose after you learned that you are going to Ugra?
- This is not my first visit to Russia. The first time it was in 2004, when I visited Yakutsk. So, this is not the most distant location of your country, which I had managed to visit. In addition, I have been working with the "Northern Forum" for a long time, so I “saw” your region on numerous photos and video recordings. I took an invitation to visit Ugra with great enthusiasm. And, frankly, I'm very impressed by what I saw. And, not only is the breathtaking nature impressive, but also warm and kind people who live here.
- The peoples of the North have a special attitude to water and its spirit. Is there something similar among people of Iceland?
- Yes of course. Icelanders have always depended on water in many aspects. One of the main traditional activities in Iceland has always been fishing. The water in our country is very cold, so the attitude towards water is very respectful. Water is a very severe and powerful force of nature. We have very strong winds, and as a result, high waves. Snow and ice are also abundant.
In Iceland, there are many myths and beliefs related to water. We also believe in water spirits and trolls. Honestly, even Santa Claus is actually from Iceland, not Lapland, as many believe.
Sport for the sake of leisure or maintaining health is not very common in Iceland. Of course, it exists, but it can not be said it is popular. The popularity of sports began to grow in recent years, but when I was a kid, rowing was for the sake of catching fish. My uncle, after whom I was named, was a fisherman. He drowned before I was born. This once again proves that the profession of a fisherman in Iceland, and in other countries, was very dangerous. Of course, technology does not stand still, and now fish production has become a much less dangerous industry. However, the attitude to water as something sacred and important has been preserved.
- What are the traditional sports in Iceland?
- Perhaps the most traditional sport in Iceland is the ancient Scandinavian wrestling glíma, which existed already during the Vikings and survived to the present day. In our country, it is considered a national sport. Another traditional sport, originating from the ancient Icelandic sagas and myths, is the throwing of stones. In addition, today international sports such as football, cross-country skiing and swimming are very common in Iceland.
- Swimming? In such a cold country?
- We have warm waters. And even hot. After all, Iceland is a country of geysers. In addition, in my country there are many indoor swimming pools. Almost all Icelandic children are 6-7 years old, and even younger, know how to swim. Swimming is part of the compulsory educational program.
- And finally, please share your impressions on oblas rowing? Was it difficult?
- It was very interesting! It was a little difficult to balance for the first few minutes, but then I got used to it. In addition, I had a very experienced partner, in many ways thanks to him, we managed to get out of the water dry.  Oblas is a very maneuverable and light boat. In Iceland, we do not have this kind of boats. Probably because we do not have such big trees as yours, and there is no way to make boats from solid pieces of wood.
By the way, today I specially put on my lucky T-shirt, which brings good luck. Last year I was wearing it, when Icelandic footballers defeated England on Euro 2016. I am convinced that with due diligence and courage, a small one can win a big one.