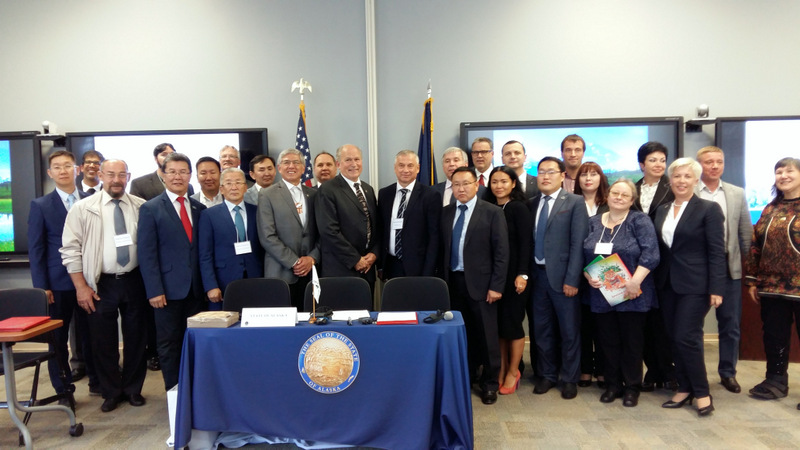 Governor Bill Walker of the US State of Alaska formally signed an agreement with the Northern Forum to return to the international organisation during a meeting of the forum’s regional coordinators, which was held in Anchorage from the 25th until the 27th of July, 2016.

Alaska’s official return to the Northern Forum - an international body that represents regional governments far Northern regions - is a key milestone. The Northern Forum’s membership was comprised of predominantly Russian regions. Alaska was one of the original founding members of the forum and had been a member until 2011, when, for various reasons, Alaskan officials decided to leave.

Vladimir Vasiliev, a minister in Yakutia, Russia, was very happy to see Alaska return to the Northern Forum. "For me personally it was kind of a shock in 2011 when Alaska made the decision to leave the Northern Forum,” he said. It “was always understood" that Alaska is an important part of the Arctic, he stated.

In a cermony conducted during the regional coordinators meeting, Governor Walker and Yuri Zakharinsky, Chairman of the Northern Forum's Regional Coordinators Committee, signed the agreement that returned Alaska to the organisation. In his speech at the signing ceremony, Alaska Governor Bill Walker emphasised the importance of cooperation between the Arctic’s different regions.

Governor Walker reounted that many years ago, former Alaska Governor Walter Hickel (1966-1969; 1990-1994), one of the original founders of the Northern Forum in the 1990s, advised him that “All Arctic regions and countries must work together to solve common problems”.  Different parts of the Arctic have common problems, and these problems can be solved via common approaches. Like many other parts of the Arctic, Alaska faces issues with infrastructure and social stressors. The possibility of increased use of shipping routes in the Arctic like the Northern Sea Route, requires communication and cooperation, Governor Walker argued.

Governor Walker also highlighted regional cooperation in the Arctic is welcome in spite of geo-political tensions. "Here the state sees a chance to bypass some of the messages from Washington and Moscow and work toward the safety and security of Alaskans in a region where we share more than we compete," Governor Walker said. "The Arctic must remain a zone of peace, and Alaska can continue to build bridges."

By working together, members of the Northern Forum hope to deal with energy issues (including the fall in the price of oil), improve infrastructure, and reduce the price of electricity for Arctic residents.