First Conference on the Economic Development of the Arctic Held in St. Petersburg 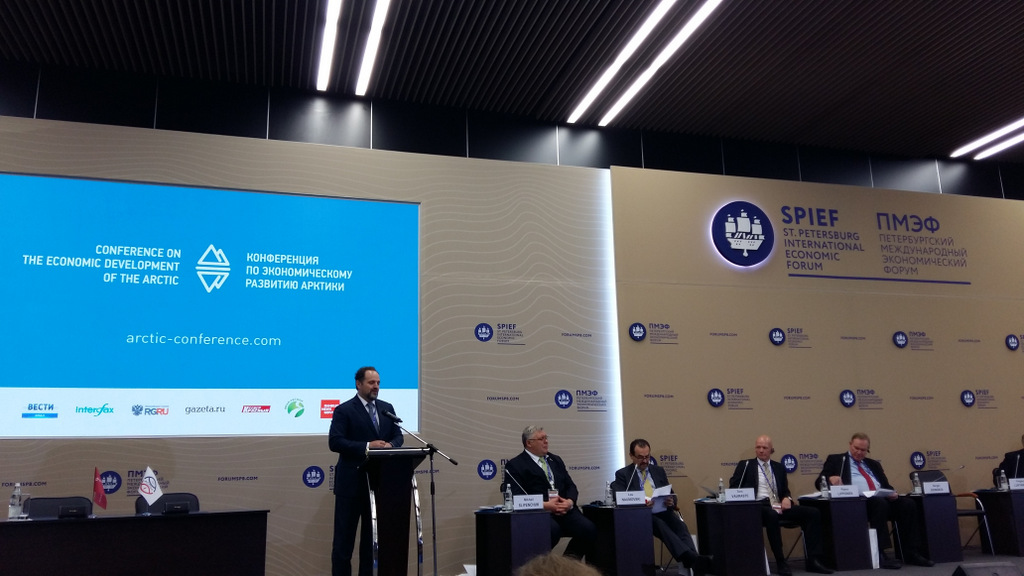 In conjunction with the 20th anniversary of the St. Petersburg International Economic Forum (SPIEF 2016), the first Conference on the Economic Development of the Arctic was held on 18 June 2016 in St. Petersburg.

Organized by the Roskongress Foundation, the conference focused on expanding investment opportunities and modernizing regional Arctic transport infrastructure, as well as on the development of the Arctic tourism sector, while ensuring environmental security of the region and conserving the cultural heritage of the Russian Arctic.

The main event was a plenary session entitled "International Cooperation for the Development of the Economic Potential of the Arctic Zone”. During this session, the panelists discussed the possibility of expanding business cooperation between the Arctic states, as well as implementing joint projects with business partners from non-Arctic countries. The meeting was attended by a delegation from the China Ocean Shipping (Group) Company (COSCO) Ltd., which has interests in using the Northern Sea Route to ship goods.

Executive Director of the Northern Forum Dr. Michail Pogodaev gave a presentation on international cooperation in the northern regions for the economic and social development of the Arctic.

In his speech Dr. Pogodaev highlighted the mission of the Northern Forum:

- Improving the quality of life of the population of the North by providing the leaders of the Northern regions with the resources and opportunities to share knowledge and experience in solving common problems;

- Supporting sustainable development and implementing joint socio-economic initiatives in the northern regions and in the international arena.

He also focused on the need for investment in Arctic infrastructure, which may be implemented by:
- Creating a comprehensive database of planned infrastructure projects in the Arctic;
- Highlighting the most pressing needs for the region, as well as gaps and overlaps in the infrastructure plans;
- Identifying investment opportunities.

In addition, Dr. Pogadaev spoke about the mechanisms of maintaining investment in the Arctic, including:
- Matching the demand for long-term credit facilities with the pressing need of investments in the Arctic, including infrastructure;
- Making sure investments are carried out in accordance with the Arctic Investment Protocol (AIP);
- Considering a variety of funding options such as regional development banks, finance companies and infrastructure development funds;
- Using high interest from pension funds, welfare funds and insurance companies with long-term investment horizon and a stable income. Artur Chilingarov, the Special Representative of the President of the Russian Federation for International Cooperation in the Arctic and Antarctic, highlighted the importance of the event when he said that “The task of dialogue between all stakeholders is to develop methods and a way to interact in which each party finds a role within the complex and multi-faceted structure of international Arctic cooperation."

At the meeting, Sergey Donskoy, the Minister of Natural Resources and Ecology of the Russian Federation, pointed out that “From the point of view of international cooperation on production and extraction of minerals, given the expansive landscape and resource diversity of Russia's Arctic zone, artificial economic barriers create obstacles to mutual international cooperation - cooperation that could give a significant impetus to scientific and industrial development internationally."

The international Arctic agenda is in large part determined by the prospects of development of the Russian Arctic. Consequently, the Roskongress Foundation and the Association of Polar Explorers reached an agreement at the conference to further develop the results of the St. Petersburg International Economic Forum within the framework of an annual public resolution, which produces the International Forum "The Arctic: Today and the Future".

Another key theme of the conference was the development of the Northern Sea Route - the most important transport route linking together the vast expanses of the Arctic territories of Russia, as well as the natural transport corridor between Asia and Europe. Its development can be a complex solution of a number of economic, demographic, social and political challenges facing northern regions of Russia and the country as a whole. At the same time, however, there are several obstacles to the objective character - from severe weather to the lack of necessary technology and experience.

The discussion was part of a panel session on "Integrated transport infrastructure of the region: The Northern Sea Route - the transport corridor of global significance ", which was moderated by Konstantin Noskov, head of the Analytical Center for the Government of Russian Federation.

With a new Russian Arctic strategy under development, the conference also featured a special panel discussion featuring governors of Arctic regions in Russia moderated by Alexander Cybulski, Deputy Minister of Economic Development of the Russian Federation. Cybulski noted that "project planning and integrated development of the Arctic territories is paramount in order for Russia to achieve its strategic interests in the Arctic with the help of existing instruments and mechanisms of state support. "

More than 300 people participated in the conference, including Russian and foreign policymakers, as well as members of the international business community. A full list of speakers and moderators can be found on the conference website.