Arctic Frontiers of the Northern Forum 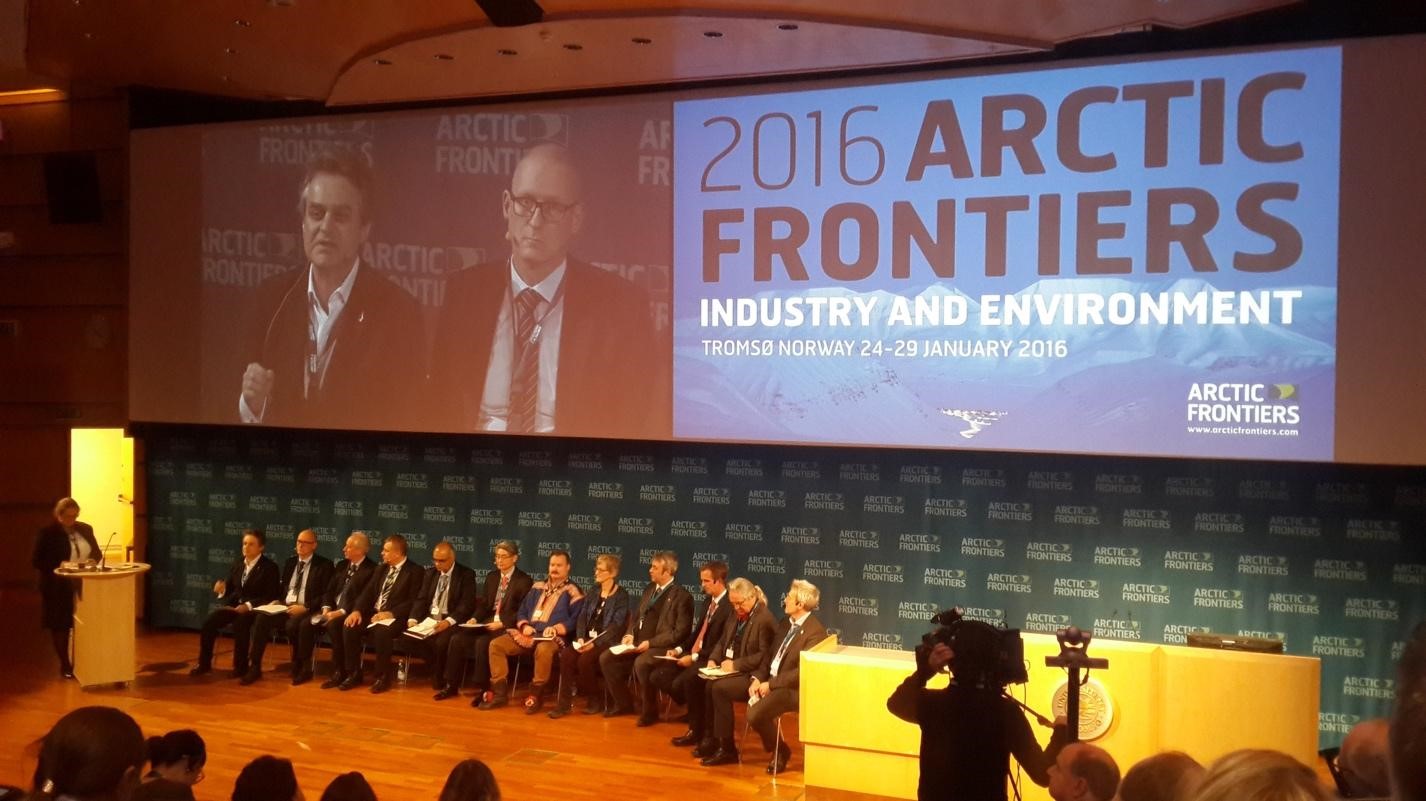 Arctic Frontiers - a major annual conference devoted to a wide range of issues on sustainable development of the Arctic, with the participation of politicians, scientists, business representatives and civil society organizations. The keynote speakers of the conference were the Prime Minister of Norway Erna Solberg, Minister of Foreign Affairs of Norway Berge Brende, President of the Sami Parliament of Norway Aili Keskitalo, the Minister for Foreign Affairs of Finland Timo Soini, Minister of Strategic Development and Nordic Cooperation of Sweden Kristina Persson, Minister of for Finance, Mineral Resources and Foreign Affairs of Greenland Vittus Qujaukitsoq, the Chair of the Arctic Council Senior Arctic Officials David Bolton, the Special Representative of the US Chairmanship on the Arctic cooperation Admiral Robert Papp, the Chair of the Arctic Economic Council Tara Sweeney and others.

This year the main theme of the conference was "Industry and Environment." In recent years there are rapid changes in the Arctic related to climate change, industrial exploration of Arctic natural resources, development of navigation, tourism, infrastructure, and strengthening the processes of globalization in this unique region. Arctic climate is changing twice as fast than in other parts of the world, climate change in the North significantly affect the climate in other regions of the globe. All these factors have a negative impact on the environment and traditional way of life of indigenous peoples of the Arctic. It is therefore necessary to ensure socio-economic development in the region in a way, that would balance the needs of global economy in natural resources and the preservation of fragile environment of the North for the benefit of future generations. 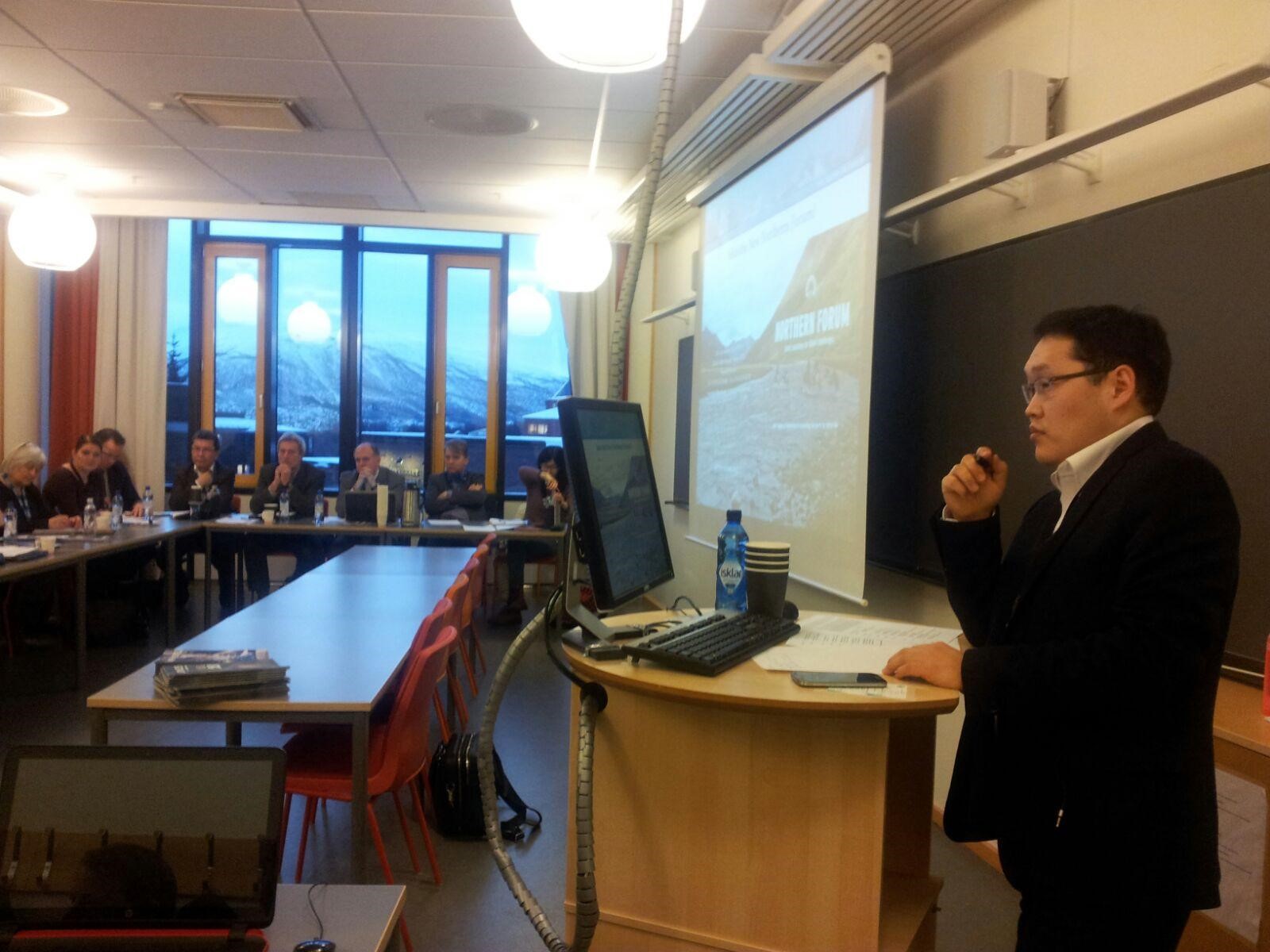 The Northern Forum during the conference brought together representatives of regional governments, international organizations and indigenous peoples to the round table to discuss the role of local and regional authorities, local communities in the sustainable development of the Arctic. The roundtable was organized by the Secretariat of the Northern Forum, and chaired by the Executive Director of the Northern Forum Mikhail Pogodaev. Keynote speakers at the roundtable were the Governor of Troms County Cecilie Myrseth and the Governor of Nordland County Tomas Norvoll from Norway, the Minister of Federal and External Relations of Sakha Republic (Yakutia) Vladimir Vasiliev, delegation of the Government of Chukotsky Autonomous Okrug, headed by the Head of Department of International Relations Office of the Governor of Chukotsky Autonomous Okrug Natalia Slugina, Chair of the Arctic Economic Council Tara Sweeney, President of the University of the Arctic Lars Kullerud, Executive Director of the International Centre for Reindeer Husbandry Anders Oskal, Director of the Institute of the North from Alaska Nils Andreassen, President of the Lapland Chamber of Commerce Timo Rautajoki, Director of the Arctic Portal from Iceland Halldor Johannsson and many others. 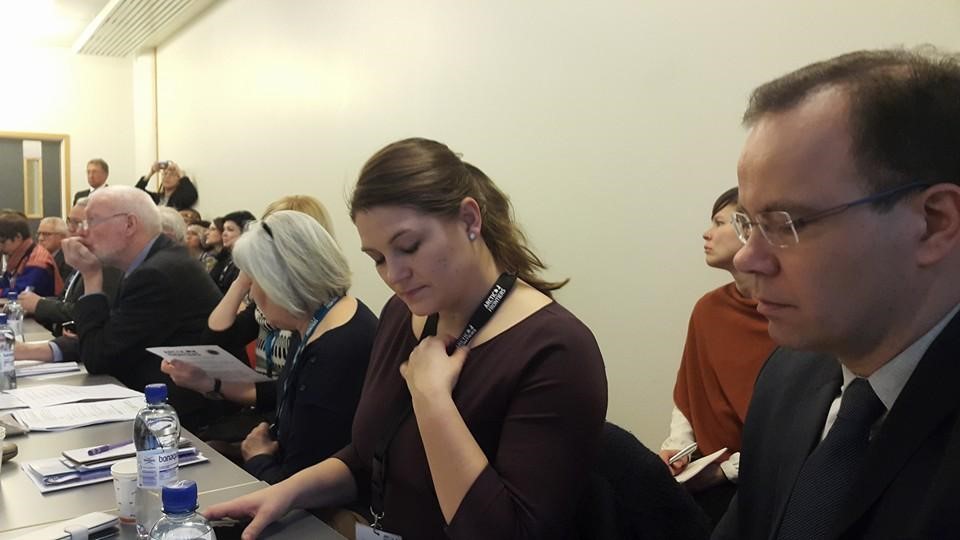 Roundtable participants agreed that there is a lack of regional dimension in Arctic cooperation. It is necessary to create a mechanism that through the Northern Forum, which has observer status in the Arctic Council, regional governments could participate in decisions shaping on the development of the Arctic and implementation of the Arctic policy. There were ideas about the need to unite and greater representation in the northern regions of the Northern Forum, to develop active project activities and solutions for common challenges through the sharing of experiences and best practices. To achieve this it is necessary to improve the organizational work in the Northern Forum. It was decided to establish a small task force of experts, which will develop a concept of strategic development of the Northern Forum.

At the Arctic FrontiersDuring the round table participants made presentations on projects and initiatives in northern regions. In particular, the delegation of Chukotsky Autonomous Okrug reoprted about activities of the Government of Chukotka, including presentation of the Head of the Department on Indigenous Peoples Issues Elena Evtyuhova who told about working with indigenous peoples and cooperation with industrial companies operating in the Far Eastern regions of Russia. In addition, the Chair of the Committee on Natural Resources and Environmental Protection, Olga Safonova informed about the work of the Government of Chukotka on the elimination of accumulated environmental damage from the activities of businesses in the region. And the Head of the Unit for protection and use of wildlife at the Department of Agriculture and Environment of the Government of Chukotsky Autonomous District Egor Vereshchagin spoke about the work on prevention of conflicts between people and polar bears in the territory of Chukotka. 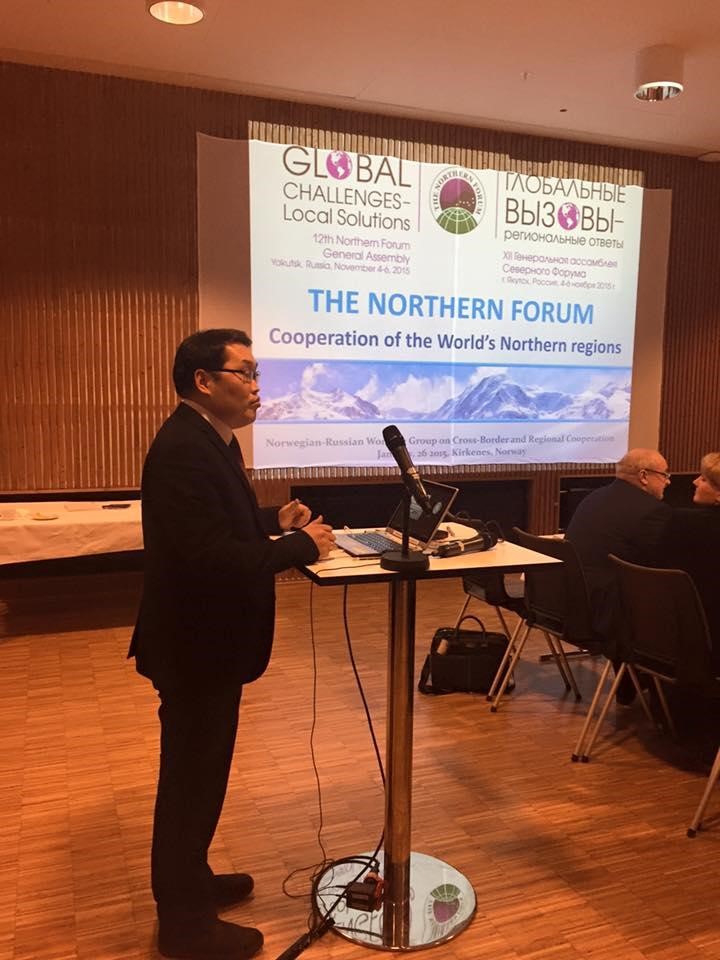 There were also presentations from representatives of Norway, in particular the Director of the High North Centre at the University of Nord of Norway Frode Mellemvik shared information on research and implementation of projects aimed at the study of various aspects of sustainable development in the Arctic. He also proposed to hold a round table in March 2016 with the participation of governors of northern provinces of Norway and discuss perspectives of international cooperation between the northern regions and participation of Norway in this collaboration. One of the objectives for the Northern Forum is attracting Norwegian and other regions of Scandinavia to membership in the Northern Forum and development of cooperation with the governors and governments of these regions.

In addition, at the round table Anton Kejlaas spoke about the activities of the newly established Norwegian Science Academy for Polar Research, which is located in Svalbard.

Meanwhile to the round-table discussion Northern Forum participated in various sections, held in the framework of the Arctic Frontiers conference. In particular, Executive Director of the Northern Forum Mikhail Pogodaev was a speaker at the session devoted to participation in Arctic cooperation of Asian countries - observers to the Arctic Council, including cooperation with indigenous peoples of the Arctic. Mikhail Pogodaev spoke about activities of the Northern Forum and participation in this cooperation of regional governments from Asia-Pacific region - Gangwon Province from South Korea, Hokkaido, Japan, and Heilongjiang from China. 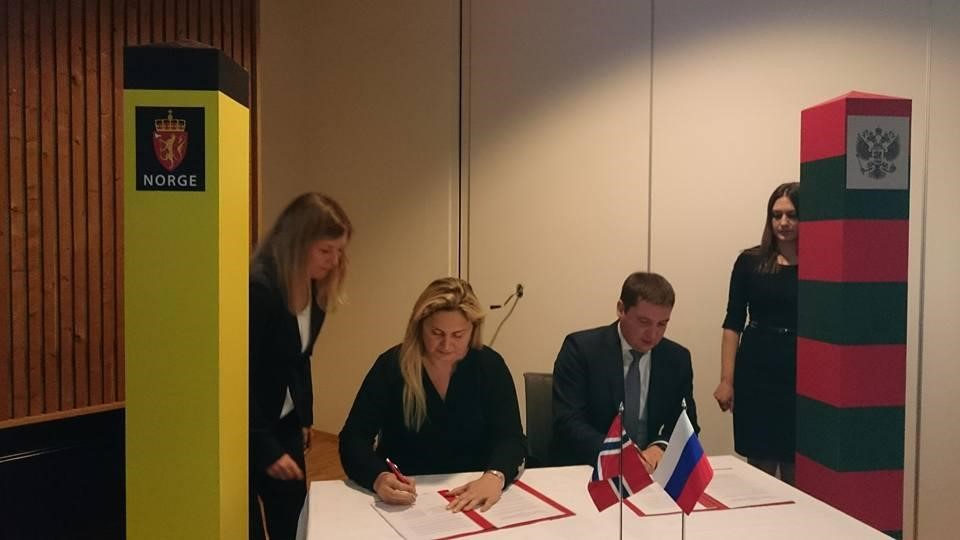 On January 26, 2016 Mikhail Pogodaev also took part in the 4th meeting of the Norwegian-Russian Working Group on Cross-border and Regional Cooperation of the Russian-Norwegian Intergovernmental Commission on Industrial, Economic and Scientific-Technical Cooperation, which was held in Kirkenes with participation of delegations from Russia and Norway. The Russian delegation was headed by the Vice-Minister of Economic Development of the Russian Federation Alexander Tsybulski, a Norwegian delegation led by the State Secretary, Vice-Minister of Trade, Industry and Fisheries of Norway Dilek Ayhan. Mikhail Pogodaev made a presentation about activities of the Northern Forum and invited Norwegian regions to join the Northern Forum and actively participate in inter-regional cooperation in the Arctic.

The Northern Forum, to take advantage of the conference Arctic Frontiers in Tromsø, in collaboration with the International Centre for Reindeer Husbandry and the Arctic University of Norway in Tromso organized a visit of delegation from the Territorial Health Insurance Fund of Sakha Republic (Yakutia) to Norway to study experience of Nordic countries in organization of health services for remote settlements in the Arctic as a part of the concept development for Arctic Medicine in Sakha Republic (Yakutia). In the delegation from Sakha there were representatives of Territorial Health Insurance Fund and insurance company "Sahamedstrah" Arian Yermolaev, Lyudmila Novikova and Rosalia Vasilyeva. Delegation had a meeting with the Rector of the Arctic University of Norway Anne Husebbek and visited the Center for Arctic Medicine at the University of Tromso, where they discussed issues related to development of telemedicine and other topics. The delegation also traveled to remote villages in northern Norway to personally get acquainted with how organized the system of health care in remote areas of Norway. The program included a visit to the Regional Medical Hospital in the city of Alta in Finnmark, the Norwegian Centre for Menthal Health in the village of Karasjok, which is working on suicide prevention among indigenous Sami people, as well as the hospital in the reindeer herding village of Kautokeino.

As a part of cultural program for delegations from Chukotsky Autonomous Okrug, Sakha Republic (Yakutia), Yamalo-Nenets Autonomous Okrug the Northern Forum in cooperation with the International Centre for Reindeer Husbandry has organized a trip to the reindeer herders' camp near the city of Tromso, in order to become familiar with the lifestyle of Sami reindeer herders and learn more about reindeer products production.

In general, participation in the international conference "Arctic Frontiers" gave an opportunity for representatives of northern regions to discuss the prospects of further development of inter-regional cooperation in the North and in the Arctic, to share and learn from the advanced experience of Arctic states in the field of sustainable development in this unique region of the world.