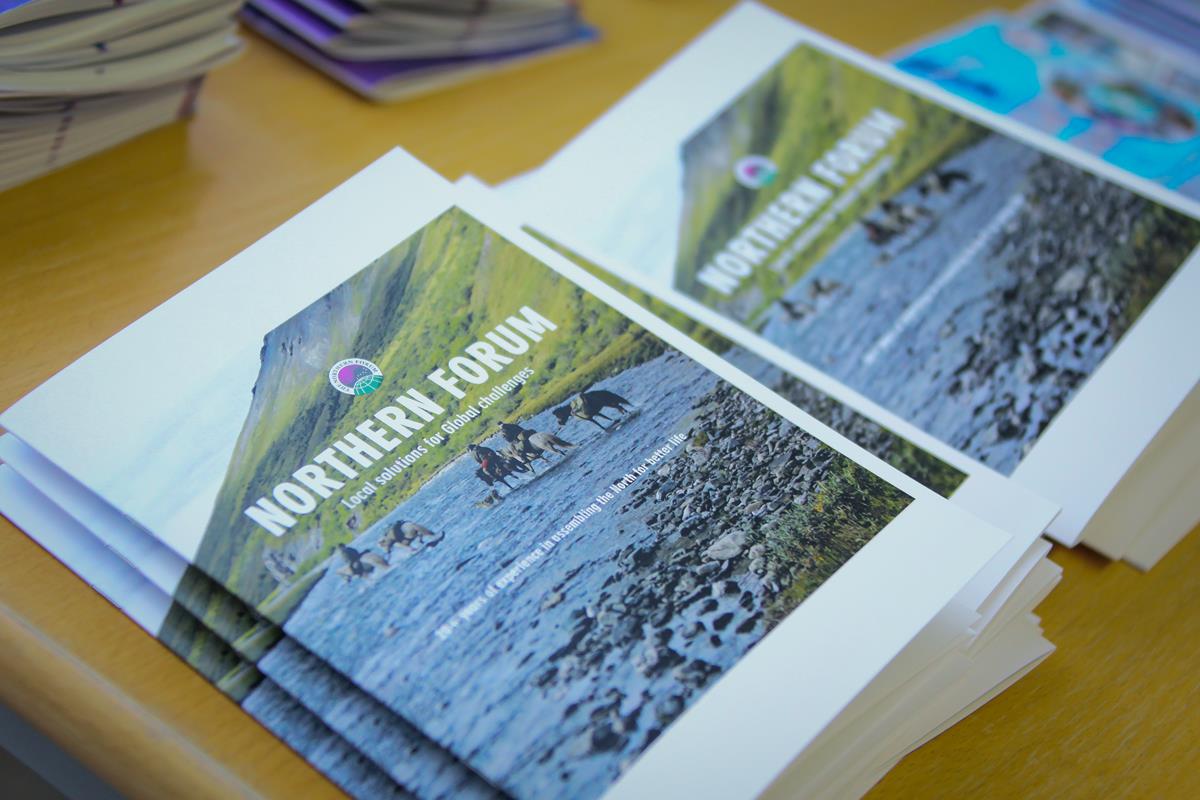 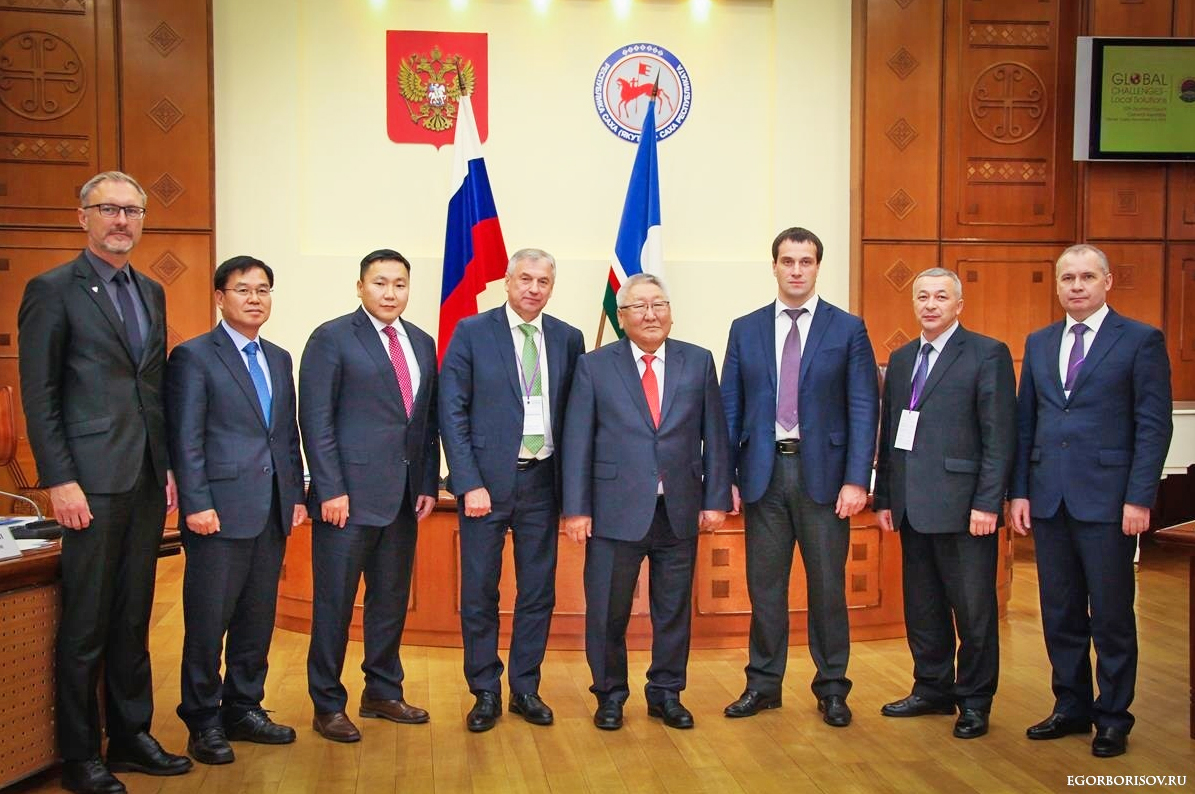 12th General Assembly of the Northern Forum has finished – the participants went home or continued their way to a next event. Finally we can summarize the last few days and what they meant for the Northern Forum. The Assembly was held in Yakutsk for the first time since 1997.

This General Assembly’s agenda focused on environmental impact on Northern regions’ sustainable development. Whereas the main panel discussion has reviewed Adaptation of regional administrations to climate change, discussion sections were dedicated to Biodiversity and environmental protection in the regions, development of business cooperation in the North, development of infrastructure in the North and the most attended section – Positive Life strategy. The latter section has indicated both high level of awareness of social and physical health issues common with the Northern regions and interest of moderating bodies – Sakha Strategic Research Center and Russian Ministry for Economic development. 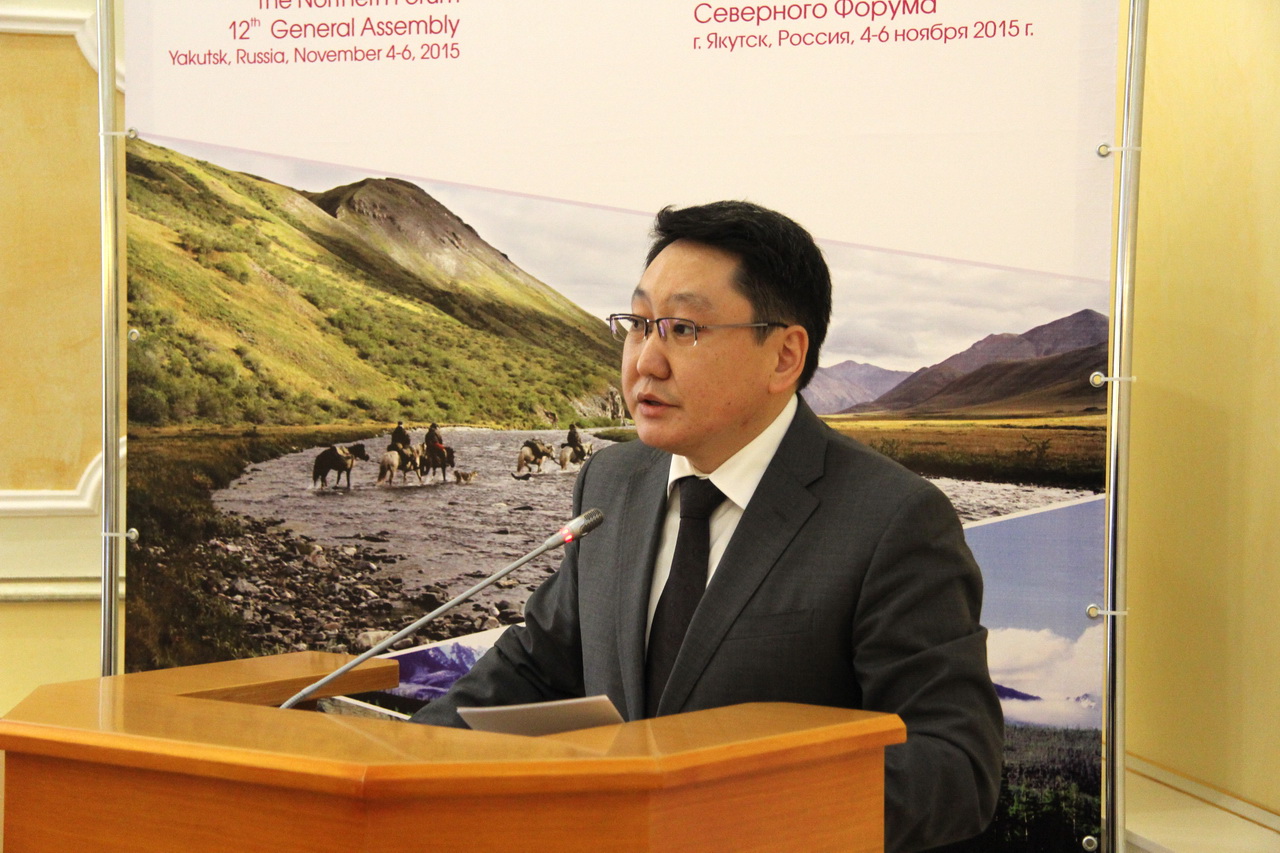 The sections were designed according to the new project work scheme, adopted by one of the resolutions of the day. The result of sections work is now a resolution prepared for consideration and approval by top decision makers in regional authorities. This measure will boost activity and interest to the Northern Forum projects, thanks to very high attention to these project sessions that was higher than of the last meeting of such scale in 2013, during the 11th General Assembly.

Administrative agenda of the General Assembly included meetings on the first day – November 4 and on the last day of November 6 and included discussion of resolutions, membership policies, past experience of change in the organization and discussion of potential for further development.

In parallel with the main events of General Assembly, 5 associated events have taken place. While first event – an International Symposium on New Priorities in TB Control in Circumpolar Regions of the Arctic, was held earlier in September; the other four were a part of a general agenda. 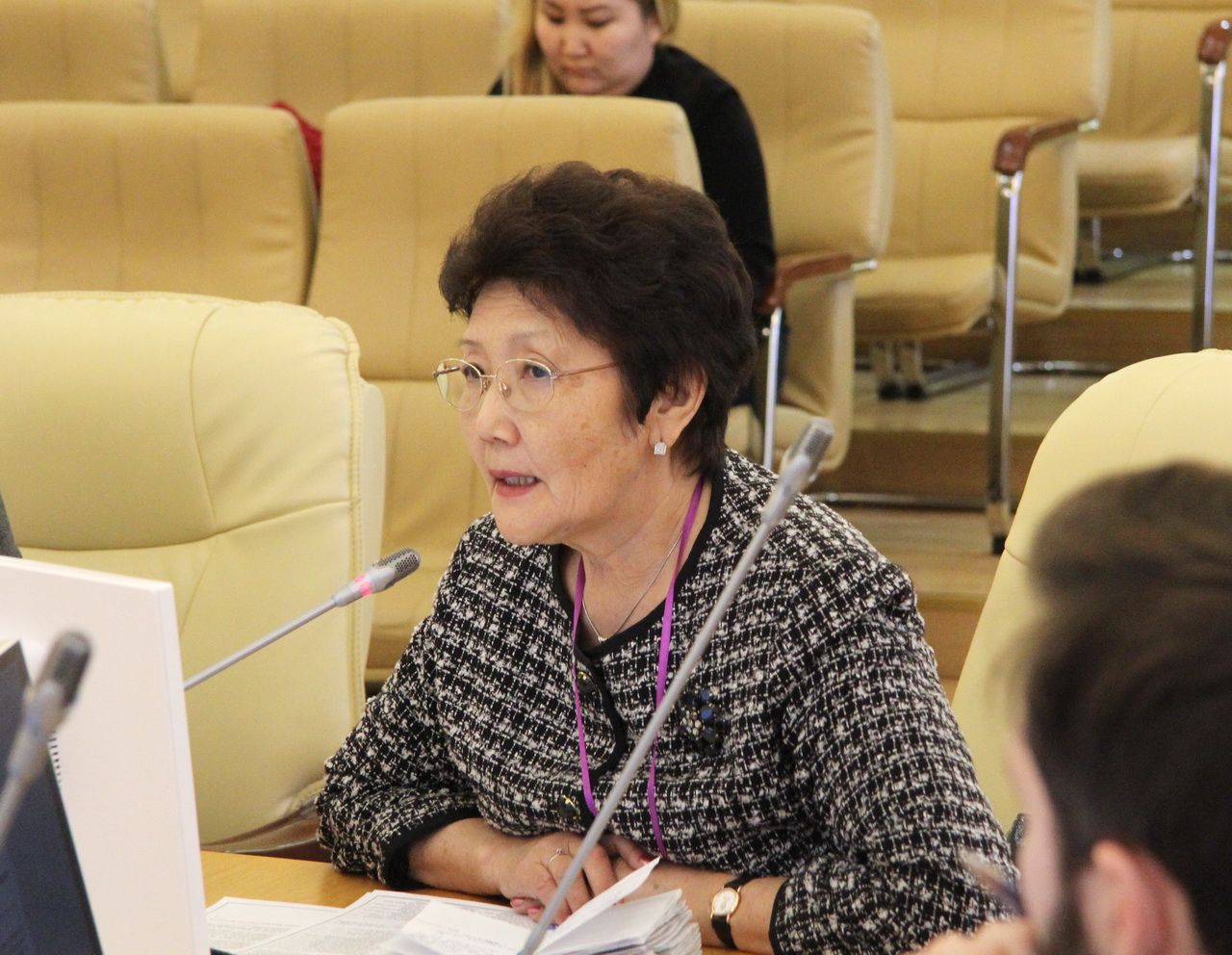 1). North-Eastern Federal University event in partnership with Universities of Alaska and Hokkaido – “Cold Lands” regular workshop with leading experts on Northern flooding problems. This event drew attention to problems of spring floods, effects of global warming and environmental condition of areas in the Northern hemisphere.

2). Arctic Council SDWG EALLU project workshop and presentation. The participants of this World Reindeer Herders project were originally bound to Chersky village (Arctic Sakha area) for a Arctic indigenous youth, Climate Change and Food Culture workshop event; therefore their agenda was also applied at the General Assembly, where participants have presented Arctic indigenous foods at the Muus Khaia restaurant during a reception from Sakha Foreign Ministry.

3). Technologies of the Arctic exhibition – a regular event showcasing latest and most actual technology for life, work and culture in the Arctic. This associate event was also a part of a general Agenda with a visit by members of the Northern Forum Board of Governors.

4). Model Arctic Council game, held by active students of the North-Eastern Federal University. Sakha Foreign Ministry and Mayor of Akureyri have taken part in the event to assess the level and enthusiasm of participants of future Arctic leaders. 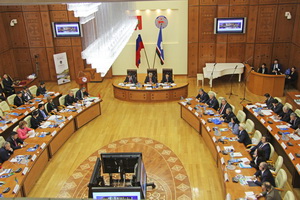 This event was also notable for regional membership. Accroding to the Resolution 172, four new member regions have been accepted to the organization as full members. These regions were – Krasnoyarsky Krai, Magadanskaya Oblast, Primorsky Krai and Nenetsky Autonomous Okrug (all from Russia). These regions have been showing interest in resuming their membership with the Northern Forum throughout this year, as all of them were members or observers in the organization at some point and have the knowledge of the Northern Forum’s structure and activities.

12th General Assembly has been a closing point of Sakha Republic chairmanship in the organization. The Republic has been a chair since 2011 and its double term brought four most important achievements:

Main Secretariat was relocated from Anchorage, Alaska in 2013 to Yakutsk; 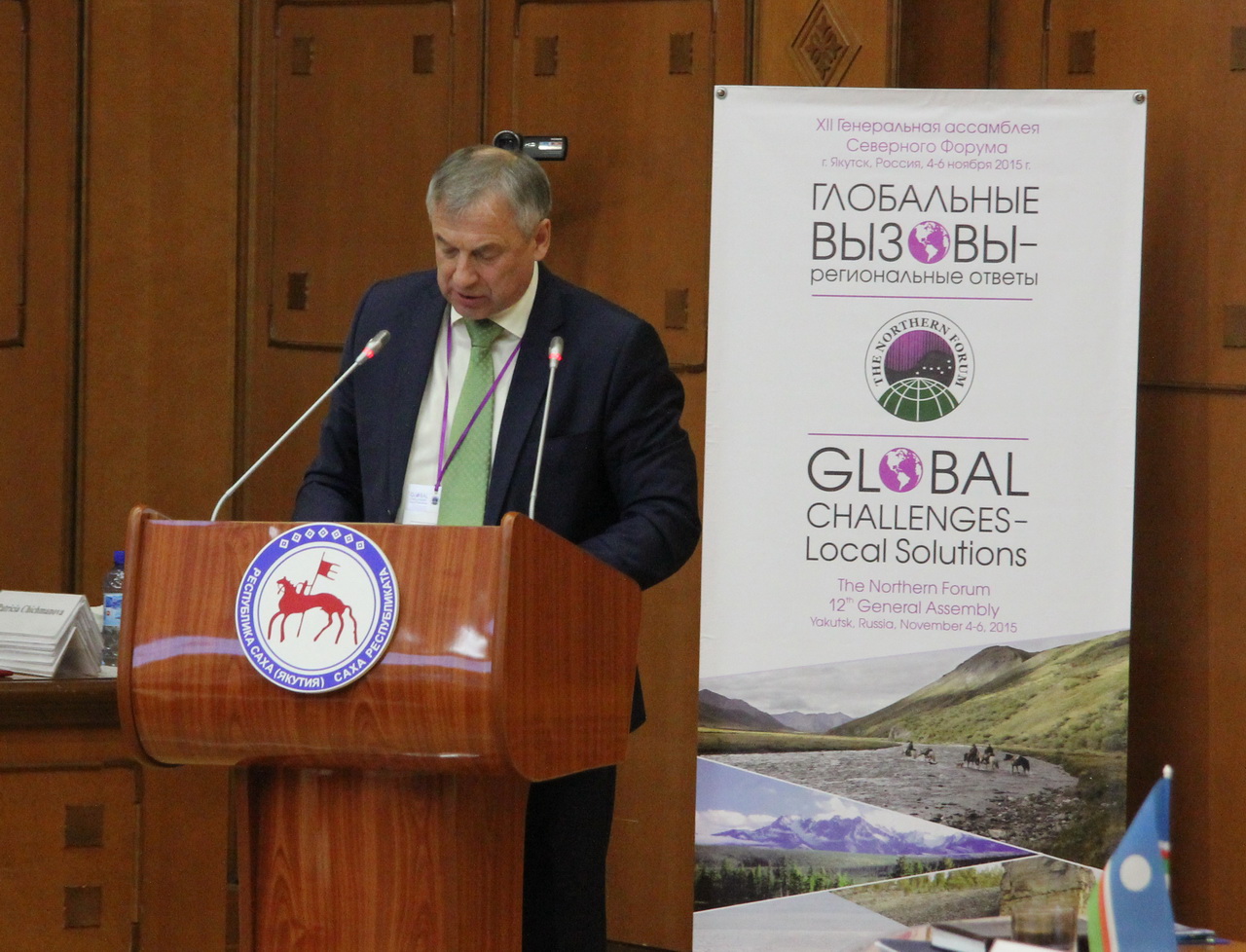 Problematic financial situation of the Northern Forum was completely resolved;

Scope of the projects have moved towards more environmental and social directions;

Regional coordinators have elected Krasnoyarsky Krai to be a chairing region of the Northern Forum for 2015-2017. The region was represented by Deputy Prime minister of Krasnoyarsky krai government, Yuri Zakharinsky, who already made a welcoming speech for chairmanship of its region on the General Assembly event. Krasnoyarsky krai already plans to hold a first Northern Forum meeting as a chair region, during the 13th Krasnoyarsk economic forum in February 2016. As core aims of chairmanship, Mr. Zakharinsky has specified increase of real work in most visible and important areas that demand immediate action – such as safety of life, development of infrastructure (roadways) and convenient Northern housing.

12th General Assembly is notable for attention drawn to its events. 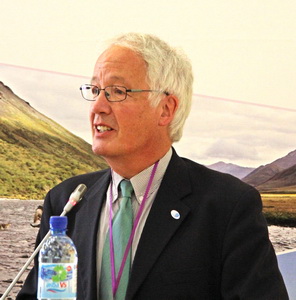 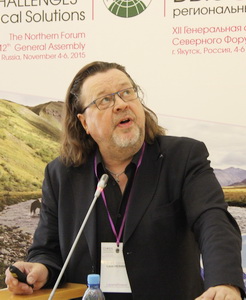 the Northern Forum and the State of Alaska barely existed in previous years, this fact showed good potential for future cooperation and restoration of strong links. Although there were no official representatives from regions of Lapland (Finland) and Hokkaido (Japan), there were experts that took active part with presentations of experience of their respective regions – for example, Mr. Lassi Heininen from Lapland and Mr. Peter Prokosch from Norway have presented their work with experience of their regions. 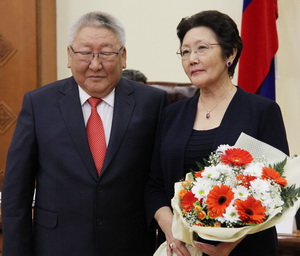 In 2013 during the 11th General Assembly, the Secretariat has launched an idea of a Northern Forum award that is dedicated for people who played a decisive role in development of the Northern regions and the Northern Forum itself. However, it was only the 12th General Assembly, when this initiative came to life – and this time, the Hickel Medals (as they were called) were issued. (The medal name was approved by Walter J. Hickel’s family). 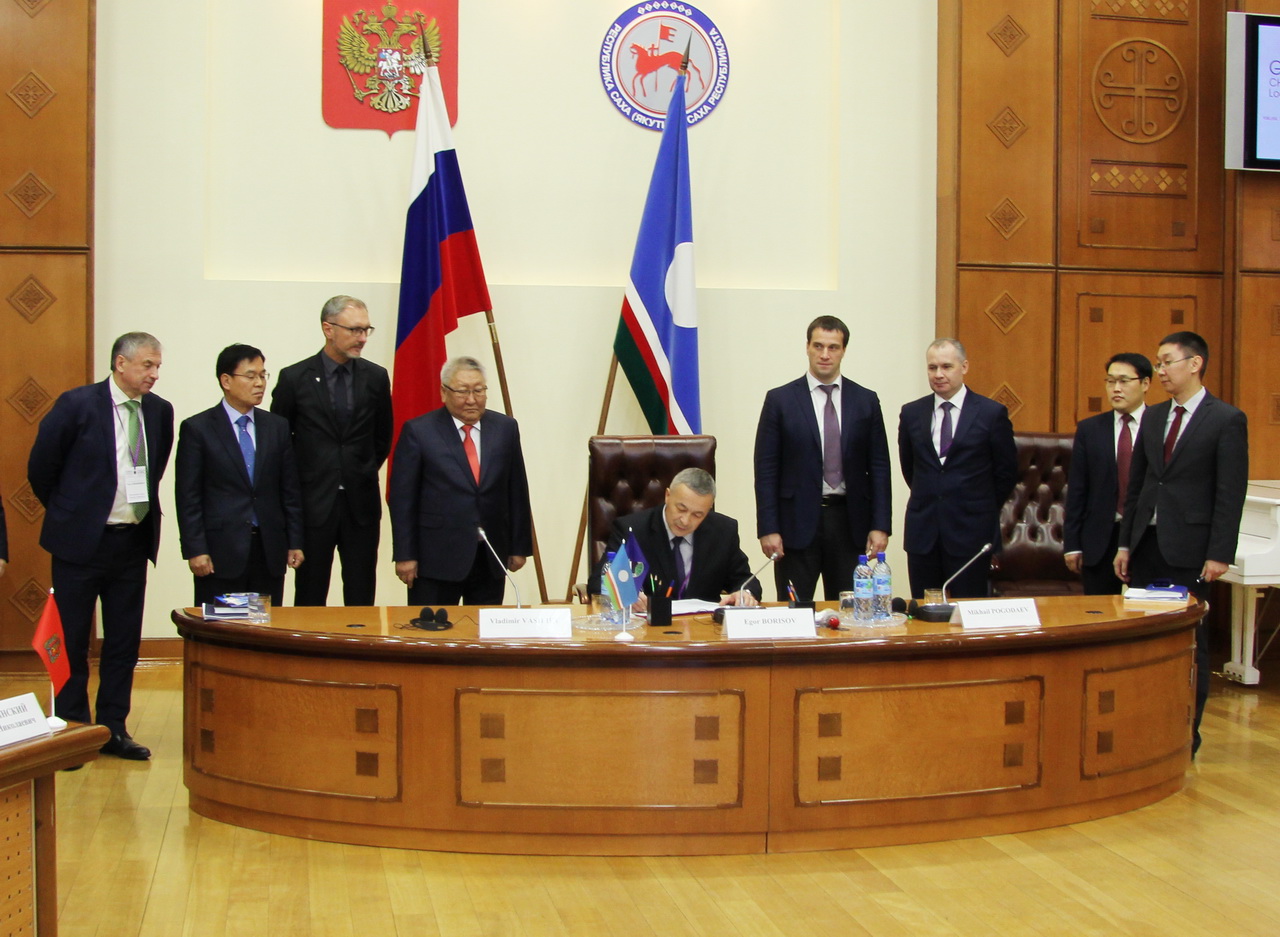 Administrative part of the General Assembly has included a closed RCC Meeting on November 4, its continuation on November 6 and the General Assembly event the same day. 7 resolutions
were prepared and adopted by the Board of Governors. The Committee did not approve two more resolutions, as the coordinators have not yet reached consensus on its budget topic. New order set in the resolutions is focused on project activity within the organization.

One of the most important propositions of this General Assembly was creation of working groups on entire directions of project work, according to Resolution 177. This measure must link work of project participants to local and interregional authorities, what increases its effect on actual, visible results. Previous system of projects united into programs was not enough efficient, due to its distance from the actual decision-makers; this time, this gap gets smaller.

Therefore, in administrative terms – the main expectation now rests with future of membership in the Northern Forum, as more regions are actively observing decisions taken on the General Assembly and are considering to join. Such signals are coming from the State of Alaska, Northern provinces of Canada, Finnish Lapland, Chinese Heilongjiang and several Russian Arctic regions. The issue of last two resolutions may indicate a path of future development of the Northern Forum that was discussed during the General Assembly agenda.