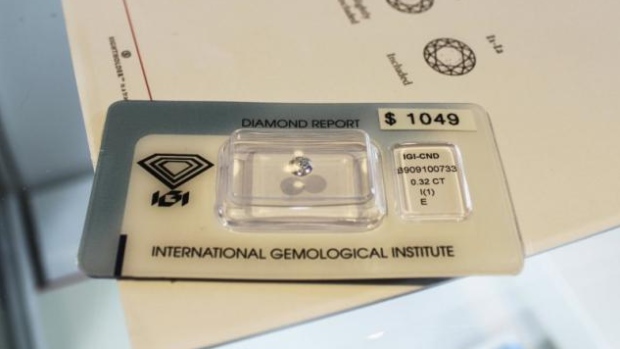 decline in diamond prices because of lower growth in Chinese jewelry demand is dulling the appeal of Canada's Arctic diamond industry, with the resulting drop in exploration hurting the region's long-term prospects. Exploration spending in Canada's diamond-rich Northwest Territories, the world's third-biggest producer, is forecast to drop 54 per cent this year, according to a Canadian government estimate earlier this year. That is bad news for an industry where even profitable deposits can take 10 to 20 years to develop into a mine.

"It's worrisome," said Tom Hoefer, executive director of NWT and Nunavut Chamber of Mines, which is based in Yellowknife, the territories' economic hub and capital. "Exploration is the lifeblood of mining."

Once the engine for booming diamond demand, the growth in China's appetite for polished gems has slowed alongside its economy. Anglo American-owned De Beers, the world's top producer by value, expects 3 to 5 per cent sales growth in China this year for its polished diamonds. They grew 5 per cent last year, down from 29 per cent in 2011. De Beers forecast flat global diamond jewelry demand in its 2015 annual outlook for the industry. In an attempt to ease a supply glut, miners have lowered production. Last week, De Beers chopped its global output for the third time this year. Producers have also been cutting prices, and several different benchmark measurements of diamond prices have been dropping in recent months.

In some cases, spending is being cut. De Beers Canada will close its Toronto headquarters and relocate the operations to Calgary, Alberta by the end of next June as part of a restructuring. Since its first diamond mine opened in 1998, Canadian production by value has boomed, and lags only Botswana and Russia. Most of the industry is based in N.W.T. — which has a land mass bigger than France and Germany combined, but with a population of just 43,600. Over the past five years, global diamond production grew just 4 per cent to 124.8 million carats, but Canadian output increased nearly 10 per cent to some 12 million carats, according to data from the Kimberley Process, which monitors sales. As a contributor to 18 per cent of N.W.T.'s gross domestic product and the creator of thousands of jobs, the diamond industry is a "godsend," said David Ramsay, N.W.T. minister of industry, tourism and investment.

Even as prices slump, De Beers is building N.W.T.'s fourth diamond mine, Gahcho Kue, which is expected to have an 11-year life. On a recent flight over the treeless tundra, the remote site was buzzing with backhoes, trucks and hundreds of workers preparing for production to begin in late 2016. But companies have no other new mines planned and existing operations are "long in the tooth," Hoefer said.

"Within 10-15-20 years, we may be seeing some of these diamond mines shut down," said Mark Heyck, the mayor of
Yellowknife, a city established because of gold mining and fortified by the growth of diamond mining.

De Beers' existing Snap Lake mine, which is not yet profitable, will operate until 2028. Rio Tinto sees production at its majority-owned Diavik mine ending in 2023. Dominion Diamond, which holds 40 per cent of Diavik and 89 per cent of the Ekati mine, awaits expansion permits that could extend Ekati by 11 years to 2031. While this isolated region is seen as having rich potential — with more opportunities for discovery of new deposits than places that have seen much more exploration — the lack of infrastructure and a punishing climate have always made development costly.

Some miners complain that N.W.T.'s permitting process also takes longer than elsewhere, another disincentive to development when prices are weak. The area's promise is "phenomenal," but the way it has been managed is "appalling," said Patrick Evans, chief executive of both explorer Kennady Diamonds and Mountain Province Diamonds, which is 49 per cent owner of Gahcho Kue. "Kennady is the only company that is doing any serious diamond exploration in the Northwest Territories," Evans said. "And if we weren't there already, we wouldn't go there now."

The mining industry also frets that a recent N.W.T. draft plan, to increase land set aside for conservation to 40 per cent from 9 per cent, could restrict future finds.

Unsettled land claims are another concern. Some 144,000 square kilometres of mineral-rich land is "frozen" because land claims have not yet been settled with aboriginal groups, said N.W.T. Minister of Environment and Natural Resources Michael Miltenberger. And while the permitting system is complex, it has been improving since last April, when the N.W.T. took over many federal responsibilities, said Miltenberger.

"We have to not only have the proper infrastructure for managing the processes and the paperwork, but we also need to make sure we clean up our own things, like land claims, so that industry knows ... there's land available," he said in an interview.

To help foster development, the government is proposing a $170 million all-weather road on the south end of a winter ice road connecting Yellowknife with the main diamond mining area. Standing on the shore of Great Slave Lake, Yellowknives Dene First Nation Chief Edward Sangris said history has shown indigenous people the need for environmental protection in this delicate landscape. His community of Dettah is a 15-minute car ride from the abandoned Giant Mine outside Yellowknife, a former gold mine which has 237,000 tonnes of lethal arsenic trioxide buried in underground vaults. "We have to ensure that whatever we agree to, with industry, complies with our understanding on how we're supposed to protect our environment," he said.

"It is a great frontier from a mineral exploration perspective," he said. "I'd be reticent to say that the heyday is over."