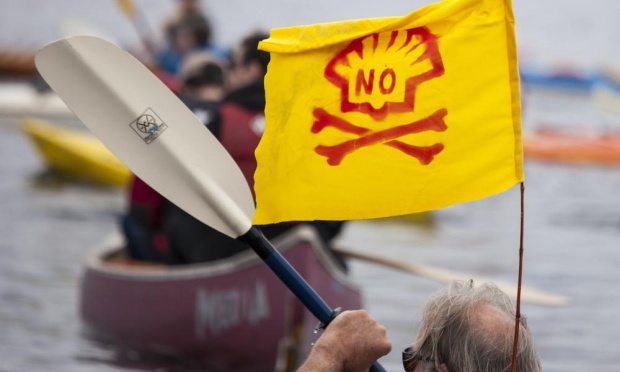 THE GUARDIAN, May 17, 2015. Shell has been caught in an embarrassing spat over its plan for a $50,000 (£31,727) video competition aimed at 18-34-year-olds to promote its view that the world still needs fossil fuels despite climate change.

The film project is being developed in partnership with US-based online ad agency Zooppa, and, according to a leaked email, was to be pitched at platforms such as Vice, the online news service. An email between Zooppa staff discussing the Shell brief makes it clear “you should NOT mention on your storyboard Arctic Oil”.

Environmentalists say Shell’s involvement in exploiting reserves in the Arctic undermines its attempt to portray itself as a responsible oil and gas company keen to tackle global warming.

While references to the Arctic are ruled out, the memo says “you can mention instead oil, gas, wind, nuclear energy”.

Greenpeace – which received the leaked email – believes the competition is being run in a bid to influence younger people in the runup to critical climate change talks convened by the United Nations in Paris in December. The email appears to be written by one Zooppa staffer to another giving advice about how to approach the project after “I met on Monday with the Shell team”. While the Anglo-Dutch group has insisted it needs to drill off Alaska this summer as part of an effort to see whether it can find oil and replenish the world’s reserves, the email suggests Shell realises its operations in the Chukchi Sea could lose it support.

A Shell spokesman said: “We said in our brief that we wanted to get these films noticed by Vice, but we didn’t expect it to happen this way. At no point was any direction given by Shell to our agency to advise entrants against mentioning the Arctic in their films. We’ve taken the agency outside and given it a stern talking to, and it is now absolutely clear on this.

“Anyway, there’s no censorship, no boundaries other than the pretty basic ones set out in the brief, just a strong desire to get people thinking creatively about how to challenge preconceptions that fossil fuels, especially natural gas, have no part in our future energy lives, and how to communicate the reality of the future energy system. That system will include renewables, nuclear power and oil and gas, including from the Arctic, which is already a major source of energy.”