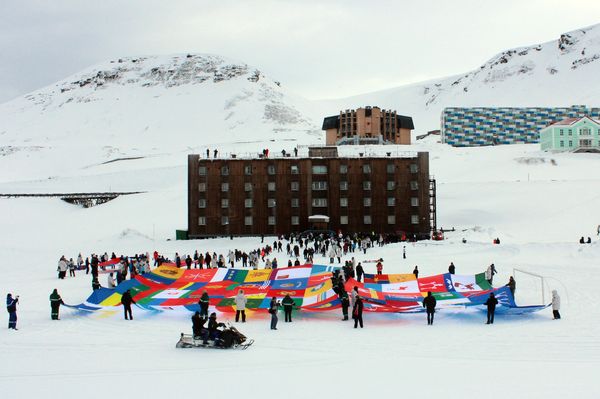 Svalbard, April 5 - RIA news, Alexander Kovalev, National flags of Russia and all 85 territorial entities of the Russian Federation, Norway and Serbia also overall record size of more than 1.5 thousand square meters were deployed at the same time to commemorate the 70th anniversary of the Victory in the Great Patriotic War near the North Pole.

Over 150 people attended the ceremony to watch flags beautifully laid on polar snow. The ceremony was hosted by a well-known known TV presenter Nikolai Drozdov (порядокслов), chairman of the international environmental movement "the Living Planet".

"Flags were made out of a special high-tech synthetic fabrics for the best demostration Arctic conditions at low temperature and wind, were consolidated into four large paintings: two with 30 flags, one with 12 and another with 17 flags. Three separate large cloth are Russia, Serbia and Norway. Emblems of socially responsible Russian corporations joined the flags, including trust "Arctic coal.

During the WW2, Arctic was heavily used as a battlefield, with Nazi Germany fighting for control over Norway, Russian North and attempting to permanently shut lend-lease shipping from Great Britain to the Soviet Union. The conquest of the Russian North was one of the most important strategic goals of the German command during the WW2. German-Soviet warfare in the North has begun as early as the night of June 22, 1941 and only ended in the fall of 1944 with retreating German troops.

This place was the only sector of the Soviet-German front, where the enemy troops were stopped a few dozen kilometers inside of the state border of the USSR.