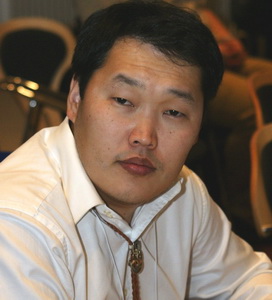 Northern Forum is one of the regular observers to the Arctic Council and is currently undergoing some changes, as the previous Executive Director Mr Vladimir Vasiliev has been appointed Minister of Federal Attitudes and External Affairs of the new Sakha Republic Government. Therefore the position of Executive Director of the forum has become vacant, and has been announced earlier. Dr Mikhail Pogodaev has been nominated to this position by the Head of Sakha Republic, H.E. Egor Borisov and after a contest procedures he was appointed as the Acting Executive Director of Northern Forum until the General Assembly to be held in Yakutsk in September 2015.

In 2009 at the 4th World Reindeer Herders Congress in Kautokeino, Norway Mikhail Pogodaev was elected as a Chair of the Association of World Reindeer Herders and has been representing this NGO in the Arctic Council as Head of Delegation for many years. He has led Arctic Council projects on behalf of the Russian Federation and Norway, and has also actively participated in different working groups. He has experience of working on this unique international forum and he could also strengthen cooperation between Northern Forum and Arctic Council. There is a potential for synergies between these international organizations, as all decisions that are shaped in the Arctic Council will ultimately have to be implemented on regional/ local levels. At the same time, there would more or less always be needs for better coordination between federal and local authorities, as well as meaningful participation of indigenous peoples in decision making processes.

The existing close cooperation and institutional relations between reindeer herding peoples and their institutions could also be positive for the Northern Forum, for instance connected to the Arctic Council, the University of the Arctic and so on. In this regard, ICR and WRH was honored to be asked by the Board of Governors of University of the Arctic to construct the 3rd UArctic Institute - the UArctic EALÁT Institute - in 2009. The Council of this Institute has been led by Mikhail Pogodaev since the beginning. As Chair of WRH, Dr Pogodaev has also led the work of WRH in the United Nations, where WRH has an official Consultative Status with the Economic and Social Council. This includes experience with different parts of the UN system, including UNEP, UNPFII, UNESCO and GEF.

With his broad experience of international cooperation and his very good relations to other regions, Dr Pogodaev could contribute very strongly to strengthen the Northern Forum, and facilitating the rejoining on equal terms of other regions to this collaboration including from Fennoscandia. His candidacy also represents a great potential for inclusion of indigenous peoples into the international cooperation between different regions of the North, given Mr Pogodaev´s strong relations with organizations of indigenous peoples across the circumpolar north. In this time of international challenges, the collaboration between northern regions and northern peoples become even more important.