There were some scary moments Tuesday on a Denver-bound Icelandair flight after lightning struck, blasting a hole in the nose of the plane. 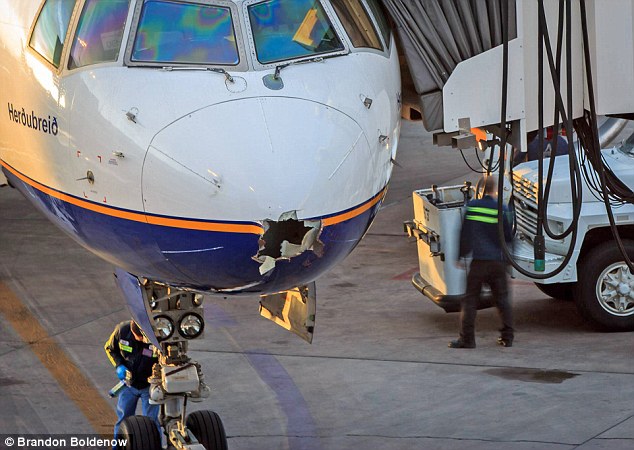 "There was a loud bang and a pop — really loud — and a bright light," said musician Nathen Maxwell, who was flying back to Denver after a month-long European tour with his band, The Bunny Gang. "It was pretty scary."

"At some point pretty soon after we left, we got hit. It wasn't at the halfway point," Maxwell said. "I thought we'd probably have to go for an emergency landing or turn around, detour or something."

But that's not what happened. Soon after the strike, the pilot came across the intercom and confirmed the plane had been hit by lightning. He then assured passengers that everything was OK, and the flight would continue on its 3,740-mile journey to Denver. Icelandair pilots followed standard protocol following the strike, checking all systems to evaluate the safety of the plane, airline spokesman Michael Raucheisen said.

"If there were issues with the safety or flight worthiness of the aircraft there would have been a system notification or the pilots would have noticed the handling of the aircraft change. Neither of these were the case," he said in an interview. "After the strike there was no signal that the plane was unstable or unsuitable for flight."

Photos taken by Maxwell after deplaning in Denver show a hole in the plane's nose. The plane is marked with the word "Herðubreið," the name of an extinct volcano in Iceland's northern highlands. The pilots were not aware of the damage to the plane until a post-landing inspection, Raucheisen said. The plane has been removed from service for inspection and repair, Raucheisen said. He was not able to say how many passengers and crew members were on the flight. Lightning strikes that damage the body of a large plane are rare, Metropolitan State University of Denver aviation professor Jeff Price said. "It could be one of those weird 'acts of God' where it hit at the right point. The important thing is the plane landed safely."

But lightning strikes are also common in aviation and so modern aircraft are equipped to handle such strikes, Price said. For example, those little "sticks" on the trailing edge of the aircraft's wing? They're not antennas. Because most modern cockpits are digital, pilots are rigorously trained to manually operate instruments in case the plane's electronics are wiped out."They're actually for static — to help mitigate the charge so that way you're not a flying lightning rod," Price said.

"At Metro, we start students on old analog gauges because we need them to have fundamental flying skills to operate the aircraft while you're rebooting systems," Price said.

"This occurred in another country, to a foreign air carrier," he said in an e-mailed statement. "The only reason they would have to report this occurrence to the FAA is if such a requirement is in their operating specifications." Iceland's FAA equivalent would be responsible for any investigation.

"When you fly internationally, you're not subject to the same FAA regulations as domestic airlines are," Price said.

Maxwell said the situation was unnerving, but he wasn't too worried. He sipped a cocktail, watched the science-fiction thriller "Interstellar" — and managed to get in a few winks. Others on board, he said, weren't quite as calm.

"I think the entire plane may have had drinks," he said. "When we got off the plane, everyone was talking about it."