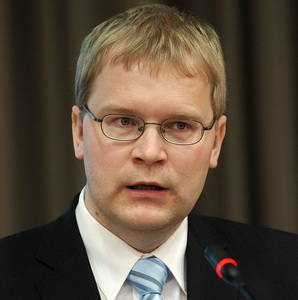 Foreign minister Urmas Paet said today at an Arctic-themed seminar in Tallinn, that Estonia is considering applying for observer status in the Arctic Council.

"Estonia is interested in what is happening in the Arctic and in participating in scientific programs connected with the Arctic, as well as in the development of related knowledge and skills. Estonia is the northernmost country, which has yet to join the Arctic cooperation format,” Paet noted. He added that at times Estonia has environmental conditions similar to the Arctic and therefore it is of interest to us to engage in applied cooperation concerning nautical and optical (light) navigation equipment with states having similar conditions, and to find partners among companies and maritime agencies.

Paet confirmed that Estonia has also begun discussions to possibly apply for observer status in the Arctic Council. “Estonia’s history of polar research goes back more than a century; our researchers and explorers have discovered the Arctic and organised expeditions there since the 19th century,” the foreign minister said. “Estonia is interested in the experiences and knowledge of the Arctic member states, as well in possible avenues of cooperation,” he added.

Paet noted that the situation which has emerged in international politics has also had an impact on the work of the Arctic Council, which until now has been relatively free of politics.

The Arctic Council is an organisation which focuses on climate and environmental issues, safety at sea, the prevention of marine pollution, and the indigenous peoples of the north.

The Arctic is receiving more and more attention in the world, especially in relation to security and transportation issues. The Arctic Council developed out of cooperation with the Arctic Environmental Protection Strategy and the Council was established in 1996 with the passing of the Ottawa Declaration.

Members of the Arctic Council are the U.S., Russia, Canada, Norway, Iceland, Denmark, Sweden and Finland. The forum has indigenous people's organizations as permanent participants.

China, India, Italy, Japan, the Republic of Korea and Singapore were granted observer member status at the 15th Summit of the Arctic Council in Kiruna in May of 2013.