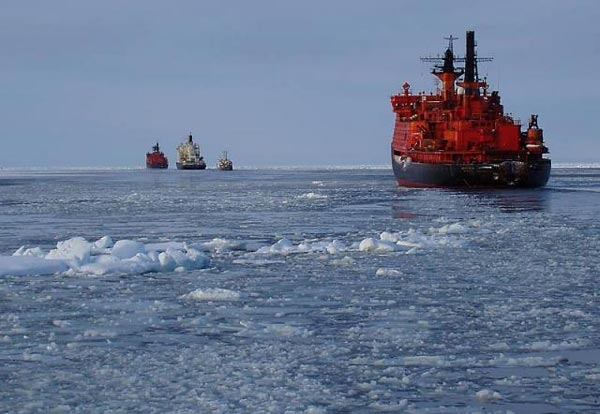 WASHINGTON, With global warming leading to increased traffic to a vulnerable Arctic, the U.S. Coast Guard is proposing a 4.6-mile wide shipping route through the Bering Strait to try to protect the region. Any accident in the sensitive area can be a major problem and traffic has increased tremendously, so the Coast Guard mapped out a voluntary two-way route — akin to a highway for ships — said agency project officer Lt. Kody Stitz.

"We see more traffic and envision more traffic to continue," Stitz said. Last year ships went through the Bering Strait 440 times, twice what it was in 2008, according to a study in the journal Marine Policy.Retired Coast Guard Vice Admiral Roger Rufe, former operations chief for the Department of Homeland Security, said that's an indication that climate change has made the region more passable for ships, with ships able to sail through formerly icy waters during more months in the year. He said shippers like the route because it can provide a shorter and quicker way to go from Europe to Asia. But the ice melting also "means that ice is more unpredictable and the weather is far worse because the ice is what keeps the waves down," said Marilyn Heiman, U.S. Arctic director for the Pew Charitable Trusts and co-author of the Marine Policy study. More than just shipping routes is needed, she said.

That increased traffic in the Bering Strait traverses rough waters, far from help, where the environment is pristine and oil spills and other accidents can have serious consequences, Rufe said.

"An oil spill up there would be really devastating," Rufe said.

This type of route is typical around far busier ports and would be the first one in the Alaska region, Stitz said. But the route leading up to and through the Bering Strait is several hundred miles long, much bigger than others. At the same time the Coast Guard is charting the route, diplomats are meeting in Peru to work on an international treaty to battle global warming.