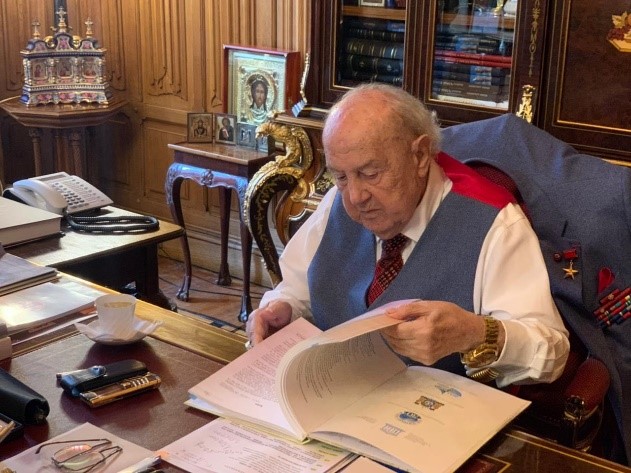 On behalf of the Presidium of the Russian Academy of Arts, the entire scientific and creative team of the Academy, the Office for the Coordination of Academic Art Education of the Russian Academy of Arts and on my own behalf, I cordially welcome the participants and organizers of the International Competition and Exhibition of Children's Creativity “Red Book through the Eyes of Children” and congratulate you on publishing the next collection of the best creative works!

It is gratifying to realize that this large-scale competitive and educational project, initiated by Ms. Olga Stytsyuk, teacher of history and world art culture, Honored Educator of Khanty-Mansyisk Autonomous Okrug – Yugra, Director of Otrazhenie Museum and Educational Center of the urban settlement of Talinka, and established in 2010 by the Service for Control and Supervision in the Field of Environmental Protection, Wildlife and Forest Relations of Khanty-Mansyisk Autonomous Okrug – Yugra has been successfully implemented for many years under the auspices of the Commission of the Russian Federation for UNESCO and the International Organization “Northern Forum” as part of the International Ecological Campaign “Save and Preserve”.

During this period, a lot of children and youth from various parts of our vast Motherland and foreign countries took part in the competition of children's creativity, dedicated to such an important and global topic as environmental education, traveling exhibitions were held and a number of books were published, including heartfelt and sincere works of young artists. All this proves great importance, relevance and demand of this Project.

Art contains great power, it makes you think, touches the deepest spiritual feelings of a person and does not leave anyone indifferent. It is remarkable that this Project allows to increase the role of fine arts in moral, patriotic and environmental education of the younger generation, promotes respect for natural resources of our planet, develops international children's cooperation, as well as reveals and supports young talents.

I express my sincere gratitude to the authors-compilers of this publication and the organizers of the International Competition-Exhibition of Children's Creativity “Red Book Through the Eyes of Children”, I wish the Project further successful development and prosperity, and all its participants and winners – plentiful joy of creativity and inspiration, self-confidence, love for the Motherland. May good luck always accompany you in everything!

President of the Russian Academy of Arts

It should be noted that during the project, more than 30 thousand children from 30 countries of near and far abroad and 79 Russian regions took part in it, 6 collections were published, more than a thousand traveling exhibitions and online presentations were organized. Exhibitions of the best creative works are held in the cities of Khanty-Mansyisk Autonomous Okrug – Yugra, regions of Russia, as well as in the member countries of the International Organization of Northern Regions “Northern Forum”.

Competitive works for the 2022-2023 project are accepted in the following categories: painting, graphics, sculpture, photography, arts and crafts, essays, poetry. Students of organizations engaged in educational activities of pre-school, primary, basic and secondary education, additional education (art schools, studios, clubs), secondary vocational education aged 6 to 17 years (inclusive), residing both in the Russian Federation and abroad are invited to participate in the project.