Scientists have solved the mystery of the craters in Yamal peninsula, Russia 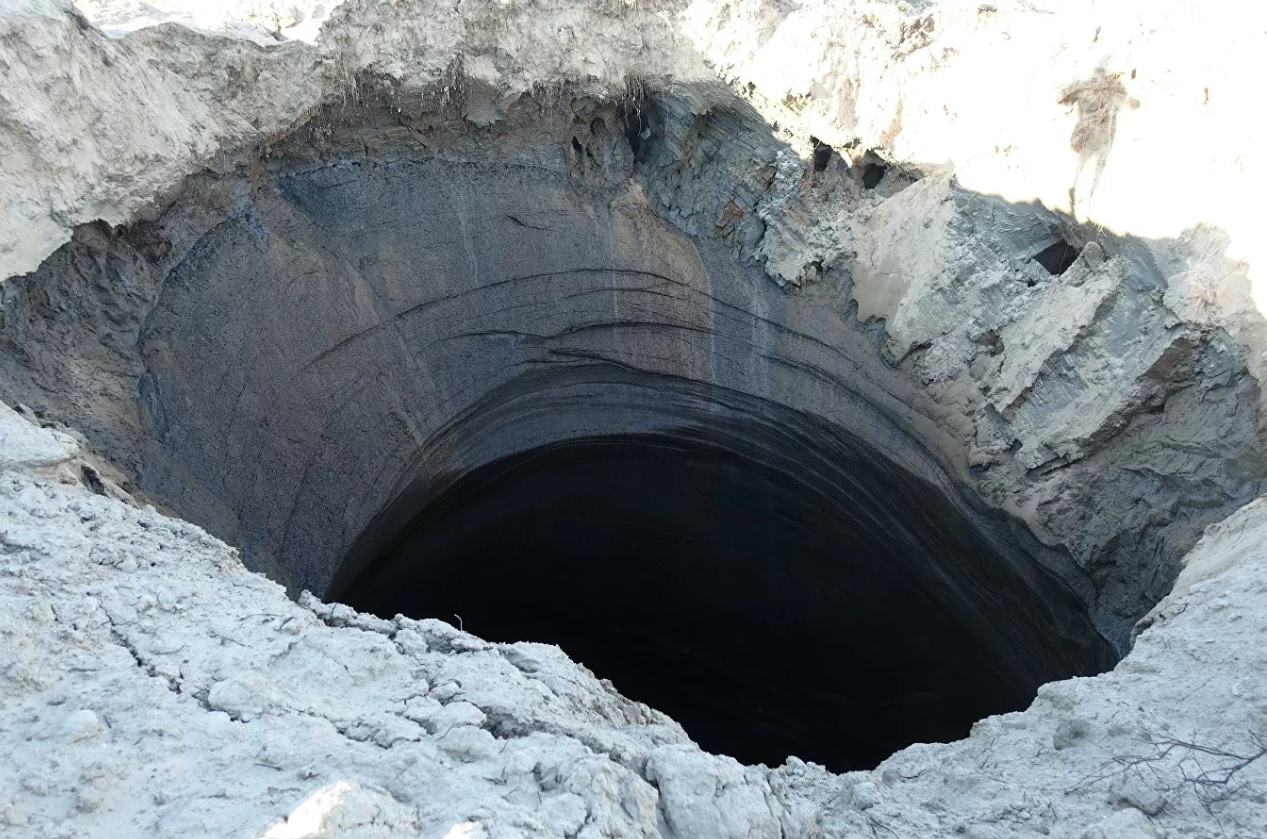 Russian scientists have built a model of the formation of craters appearing in permafrost as a result of methane emissions. The results of the study are published in two articles (1, 2) in the Geosciences journal.

In 2014, on the Yamal Peninsula, not far from the Bovanenkovskoye gas field, the first crater was discovered - a giant funnel 40 meters in diameter with vertical walls. Since then, several more similar craters have been discovered in the Arctic, but scientists are still arguing about their origin.

One of the main hypotheses is a methane explosion. The permafrost, which occupies two thirds of the territory of Russia, is a gigantic natural reservoir of this gas. Under conditions of warming and the gradual destruction of permafrost, methane in the depths is released and breaks out to the surface in the form of a powerful explosive release.

Skoltech scientists, together with colleagues from the Department of Science and Innovation and the Arctic Research Center of the Yamalo-Nenets Autonomous Okrug, have been researching one of these craters for more than two years. They managed not only to build a model of its formation, but also to establish the source of methane.

“Craters in the Arctic are a rather rare phenomenon that occurs, as a rule, in hard-to-reach areas of the Arctic tundra. Swelling of the surface that precedes the emergence of a crater occurs quite quickly, often within one to two years, therefore it is difficult to observe, - Evgeny Chuvilin, head of the study, leading researcher at the Skoltech Hydrocarbon Production Center, “Almost all craters were discovered after they were formed. There are only fragmentary reports of local residents who say they heard noise or saw smoke and flame. "It should also be considered that the formed craters quickly enough, in just one or two years, turn into lakes, which over time are difficult to distinguish from ordinary thermokarst lakes in the Arctic tundra."

Scientists examined the crater in the floodplain of the Erkut-Yakh River, which in the summer of 2017 was accidentally discovered by biologists who studied the falcon's nesting sites. According to Chuvilin, Skoltech’s scientists were very lucky: they were able to get to the little-known Yerkutinsky crater in the very first year from the moment they were formed - after all, the next year it was already filled with water and turned into a lake. At the time of discovering, the crater had a depth of 20 meters and the same width.

In December 2017, researchers took samples of frozen rocks, underground ice and water in the Yerkutinsky crater, and after six months they made observations using drones. In the samples of underground ice, carbon isotopes were found in an amount characteristic of biogenic hydrocarbons. Moreover, the ratio of methane to the total volume of its homologues - ethane and propane - indicated the flow of gas from deep layers.

Based on these data, scientists built a model for the formation of the Yerkutinsky crater, which was formed on the site of one of the dried lakes. Under this lake, according to the authors, there was previously talik - a section of non-freezing gas-saturated rock. After the lake dried up, it began to freeze on all sides, which created a strong tension, which subsequently led to a powerful explosion.

“The formation of a gas ejection crater in permafrost is a little-studied and practically not described previously process, which is an explosive release of a mixture consisting of rocks, ice, water and gases. Some researchers call this cryovolcanism,” Chuvilin explains. “Such natural processes with the formation of large funnels can be dangerous for human life in the Arctic, which necessitates their prediction based on the results of studying gas sources, primarily methane, their accumulation mechanisms in the upper permafrost horizons and the conditions for the occurrence of explosive gas emissions. Such emissions can contribute to an increase in greenhouse gases in the atmosphere."

Methane is a powerful greenhouse gas, and its release into the atmosphere can accelerate global warming, scientists say. On the other hand, climate change will lead to even greater methane release from permafrost.