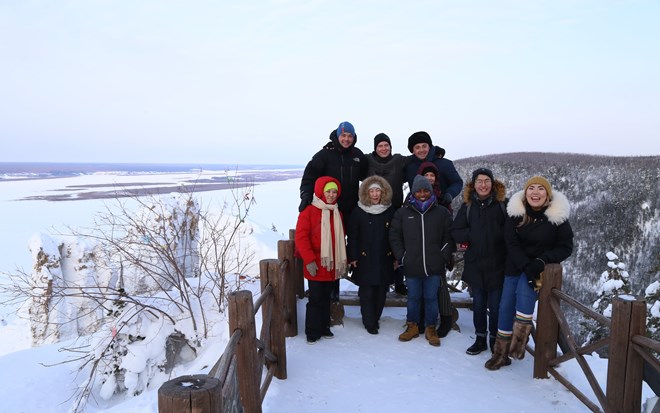 Arctic Winter School 2020 has successfully completed its work in Yakutsk, Russia. It was held at the North-Eastern Federal University, Yakutsk, Russia from February 25 to March 7, 2020 and was co-organized by the Northern Forum international organization.

This year, students from countries such as Norway, Finland and Poland, representing Tampere University, Adam Mickiewicz University in Poznan, University of Oslo, as well as Norwegian University of Science and Technology got chance to visit Yakutsk and take part in winter school.

During the program, participants attended a lecture course on the following modules:

The school program was not limited to lectures, but also provided many field trips to strategic points in terms of regional development as well as to popular tourist destinations, including Zhatay shipyard, Nizhny Bestyakh railway station, Nature Park “Lena Pillars”, as well as visits to the Institute of Permafrost, Northern Forum Secretariat, IT-park “Yakutia”, etc.

At the end, the participants shared their impressions, gained experience, and talked about their own research in the framework of the Participant Forum “Innovation and Environment in the North”.

The organizers of the school were: from NEFU - Vice-rector for International Relations, Vladlen Kugunurov, and from the Northern Forum - Acting Executive Director, Daryana Maximova.

The organizers received excellent student participation feedback. According to it, participation in the winter school became one of the most memorable experiences. Many students noted that they liked the field trips most of all, especially visiting the Nature Park “Lena Pillars”, which is included in the UNESCO World Heritage List, as well as, communication with local residents, and the opportunity to gain useful contacts. The most positive comments and high marks were given for lectures on Protected Areas and Biodiversity Conservation, Actual Problems of Social and Economic Development in the Arctic Zones of Russia, Arctic Traffic Infrastructure and the Northern Sea Route.