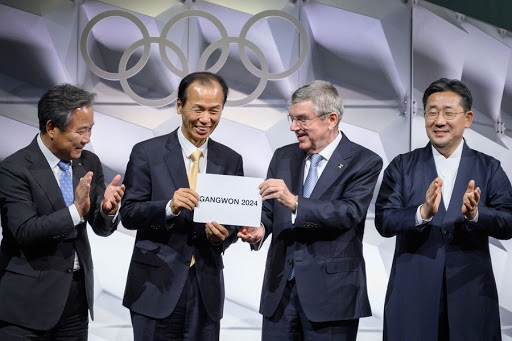 The fourth edition of the Winter Youth Olympic Games (YOG) 2024 will be held in South Korea’s Gangwon Province in the cities of PyeongChang and Gangneung, home to the Olympic Winter Games 2019, the International Olympic Committee announced in Lausanne, Switzerland, on Jan. 10 (local time).

The IOC voted in its 135th session to award the Winter YOG to Asia for the first time, building on the legacy of the Olympic Winter Games PyeongChang 2018.

Among the 82 voting cards distributed, 79 of the 81 valid votes accepted to elect the Province of Gangwon as a host of the 4th Winter Youth Olympic Games 2024.

Gangwon 2024 draws upon the successful delivery of the Olympic Winter Games PyeongChang 2018 and aims to continue their vision of bringing sport to a new generation of winter athletes. The hosting of the Winter YOG leverages the significant investment that the Republic of Korea has made into developing winter sport in the country and throughout Asia.

“The Korean government is committed to providing the necessary support to ensure that the Gangwon 2024 Youth Olympic Games are a great success,” added Park Yang-woo, South Korean minister of culture, sport and tourism and head of the Gangwon 2024 delegation. “We will continue the strong legacy of the recent Olympic Winter Games in PyeongChang and work to achieve our vision of expanding new horizons in sport.”

Gangwon 2024 will be held for 15 days from Jan. 19 to Feb. 2 with the participation of 2,600 athletes and sports officials from some 70 countries around the world.

The new Winter Youth Olympic Games host will benefit from many of the facilities used in PyeongChang 2018 as well as possible alternative venue options. Competitions would take place in PyeongChang (mountain sports) and Gangneung (ice sports), similar to the Games concept in 2018. The Winter YOG will provide young athletes with the opportunity to compete in some of the same venues where Olympians competed a few years earlier. The Youth Olympic Village would be located at student accommodation facilities at Gangneung-Wonju University.

The master plan will be finalized during a co-creation period, in which the IOC and Olympic stakeholders will collaborate with the elected host. The sports program and a detailed budget aligned to the strategic objectives and local context will also be developed during this period.

The PyeongChang 2018 Legacy Foundation was launched last year to ensure the legacy of the Olympic Winter Games PyeongChang 2018 would continue to benefit the region for decades to come. The foundation aims to continue the development of winter sport in Asia, spread the Olympic values to young people through various sports and education projects, and also manage several venues that were used at the Olympic Winter Games. This year, the foundation will oversee Olympic values education camps for 20,000 students around the country and also host the annual Dream Program, now in its 16th year, by providing winter sports training camps to young people from around the world.

From the very beginning of the dialogue, the IOC has indicated to the Korean Sport and Olympic Committee that it would be ready to accept the Olympic Committee of the Democratic People’s Republic of Korea as a partner in the organization of the 4th Winter Youth Olympic Games, if the circumstances allow.

The awarding of the 4th Winter YOG was the first under the IOC’s new approach to future host elections, part of Olympic Agenda 2020. More targeted and streamlined, it allows greater flexibility and dialogue, in which interest in future Olympic and Youth Olympic Games is overseen by two permanent Future Host Commissions (Summer and Winter). The commissions advise the IOC Executive Board, which in turn makes recommendations to the IOC Session, including putting forward preferred hosts for election.

The first Winter YOG was held in Innsbruck, Austria in 2012, the second in Lillehammer, Norway in 2016. The third edition opened on Jan. 9, 2020 in Lausanne, Switzerland, and will last until Jan. 22.