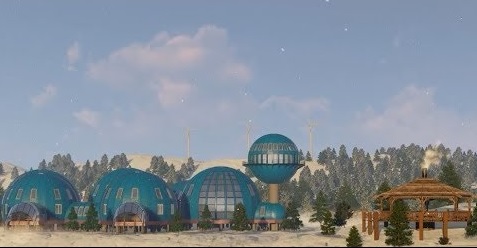 Scientific station "Snezhinka" is planned to be open in Yamal in 2022, according to TASS. The purpose of the station is conducting international research, including research on renewable energy.

“This platform is thought of as interdisciplinary, wide, we are laying the possibility of placing equipment for testing technologies that are completely unrelated to energy: telecommunications, medicine, Internet of things, smart settlement. We do not limit this list to foreign colleagues” -said Yuri Vasiliev, executive director of the Institute of Arctic Technologies at the Moscow Institute of Physics and Technology.

According to Yuri Vasiliev, the station, consisting of several module domes, will operate on renewable energy, mainly with the help of wind generators, while solar panels will be used during the summer. In addition, hydrogen will be generated by electrolysis, which can be used to heat the station when there is no wind and sun. The cost of construction is estimated 10-12 million euros.

“The concept of the project corresponds to the principles that we lay as foundation for Russia's chairmanship of the Arctic Council in 2021-2023, where the issue of sustainable development will be one of the main directions. That is why Russia submitted this project for consideration to the working group of the Arctic Council on Sustainable Development last month” - said Korchunov.