The main locations of the expeditions in the Verkhoyansky ulus are bases “Nelgese”, and in the Oymyakon ulus – “Burustakh”, where the lowest temperatures in the Northern hemisphere of the Earth were previously recorded. 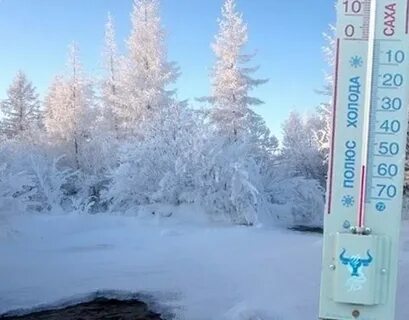 In the coldest month of winter, admirers of extreme will search for record low temperatures in Yakutia. Volunteer bloggers will live in tents for two weeks and feel the real breath of the North. The Cold Conquerors project is carried out to promote the tourist potential of Yakutia as the coldest inhabited territory of the world.

The Cold Conquerors World Cup is a unique experiment involving volunteers. The expedition members at the same time measure the air temperature according to the common method using the common instruments. The author of the “Cold Conquerors” project is the owner of the travel company, academician of the National Academy of Tourism of the Russian Federation Vyacheslav Ipatiev.

According to the Ministry of Entrepreneurship, Trade and Tourism of the region, the first expedition will be held in test mode from January 11 to January 24, 2020. The locations of the expeditions are determined in the Verkhoyansky ulus – the Nelgese base and in the Oymyakon ulus - the Burustakh base, where the lowest temperatures in the Northern hemisphere of the Earth were previously recorded.

Guides for the expedition participants will be the famous Yakut traveler, owner of the Yakut husky nursery, businessman German Arbugaev and one of the most famous travelers of Yakutia, a traumatologist with many years of experience Georgy Tsypandin. The bloggers Ilya Voskresensky, Pavel Matveev and Natalia Belyakova will become participants in the first expedition.

Project participants are waiting for a rich program. They will not only search for the lowest temperatures, but will also test their survival in low temperatures. The tents and local clothing will be tested in cold weather. Bloggers will be reporting on the expeditions through their social media, promoting extreme sports to their subscribers. In addition, volunteers get involved in the livelihood of reindeer herders, conduct various tests in the cold conditions, get acquainted with life in the Far North.

Members of the expedition, who will record the lowest temperature, will be published in scientific guides and publications on registered world records and will receive the title “Cold Conqueror” with a personal certificate. With the successful annual implementation of the project, science will be able to obtain completely unique data on the lowest temperatures in the Northern Hemisphere of the Earth over a long period.

Given the importance of creating a positive image and promoting the brand of Yakutia as the coldest region in the world, the project was supported by the Head of the Sakha Republic (Yakutia) Aisen Nikolaev. The expedition of the World Cup “Cold Conquerors” will be held annually in order to scientifically record the coldest temperatures and develop extreme tourism in the future. A symbolic start to the project was given in Verkhoyansky ulus at the festival “Verkhoyansk City - The World Center of Cold”: a meteorological probe with a flag was launched into the sky.

Press Service of the Government of the Sakha Republic (Yakutia)