Experts estimated the possibility of a military conflict in the Arctic 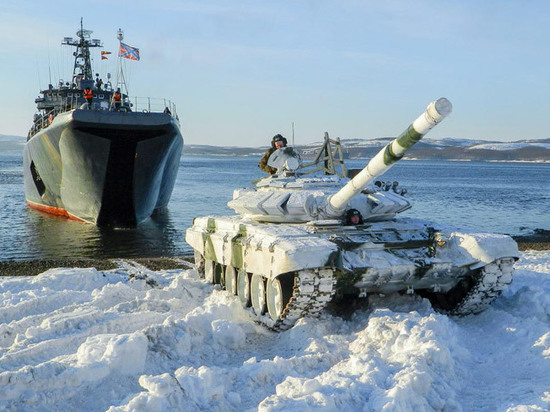 "Our Armed Forces are able to fully ensure the safety of navigation in the waters of the Northern Sea Route, and therefore there is no need to find warships of other countries in this sea corridor". So answered to the representative of Japan, Chief of the General Staff of the Armed Forces of the Russian Federation, Army General Valery Gerasimov who invited foreign military attaches to the meeting. The representative of Japan asked our commander how Russia would react if foreign warships began to sail along the Northern Sea Route.

The Chief of the General Staff also noted that the Russian Arctic and the Northern Sea Route belong to the Northern Fleet's area of ​​responsibility. It is an interspecific operational-strategic association, which equates it in status to any of the four military districts. And this fleet will continue to develop.

Can such an unambiguous position in regard to foreign warships provoke armed confrontation in the Arctic? Experts commented on the position of the General Staff.

According to the Chairman of the Presidium of the public organization "Officers of Russia", Hero of the Russian Federation, Major General Sergey Lipov, the Northern Sea Route is the main sea communication of Russia in the Arctic.

- The point is not even that our Armed forces fully ensure the safety of shipping in the Arctic, but that no one but us simply has the resources to fully stay in the region. After all, the Arctic is a special place, there are difficult climatic conditions, difficult navigation. And only our country can give all the ships passing there the correct information on the navigation, ice, meteorological and hydrographic conditions. The general recalled that "even Americans don’t have ships of the required class - let alone the rest".

“This, by the way, caused the refusal of the US Arctic training at the end of last year - because in the event of a breakdown at high latitudes, the crew of the only American icebreaker would have been forced to turn to Russia for help” - Sergey Lipovoy explained.

In turn, Daryana Maximova, senior researcher at the Institute of the USA and Canada of the Russian Academy of Sciences, associate professor of the North-Eastern Federal University (Yakutsk), told MK that Russia has every right to control the passage of foreign ships along the Northern Sea Route.

- The Northern Sea Route is our internal waters, which are defined by international law. The order of passage in this way is determined by internal Russian rules. We have a special structure - the administration of the Northern Sea Route, which accepts applications and gives permission to the courts for its passage. The most important goal is to ensure peaceful shipping.

The expert said that in international practice there have been disputes around the use of such marine arteries - for example, in North America between the United States and Canada.

- In the 70–80s, these countries had a problem in relations. The United States wanted to use the Northwest Sea Passage in the Canadian Arctic Archipelago. The main condition on the part of Canada was the passage of vessels with a raised flag for peaceful purposes”, said Daryana Maximova, who is the executive director of the Northern Forum. - In 1988, an agreement was concluded between Canada and the United States, which established the rules for the passage of American icebreakers and ships. The only thing there was not stipulated was the passage of submarines.

- Do we have similar agreements with anyone?

- We do not have such an agreement with any of the countries. So, I repeat, the rules for using the Arctic route are determined by the administration of the Northern Sea Route, which either allows passage or not. Depending on the purpose of the ships.

Given the fact that NATO countries, such as Norway, have intensified military activities in the Arctic, it may be worth considering some additional agreements. They could reduce tension in relations, for example, on the issue of military exercises in the Arctic.

- In recent years, the Northern Fleet has been actively restoring military infrastructure in the Arctic. What is the reason for this?

- Military bases on the Northern Sea Route are a matter of national security, this is our border zone. And we certainly need to strengthen our borders.