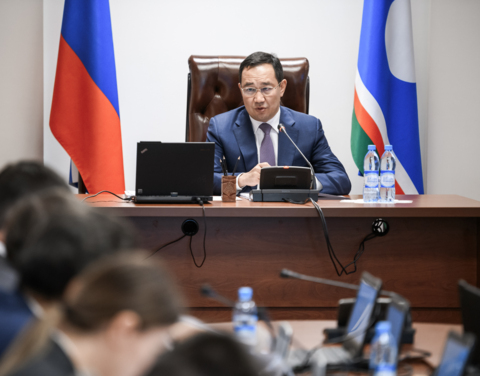 The governor of the Sakha Republic (Yakutia) Aisen Nikolaev held a meeting on the republic's national projects and listened to the members of cabinet ministers' report who are responsible for the projects' implementation.

The head of the region noted that national projects in the republic are being implemented successfully. However, as he said, some of the projects need acceleration. Particularly, Nikolaev drew special attention to the creation of the research and education center for the development of the Arctic and Subarctic.

It is expected that the Center for the Development of the Arctic and Subarctic “North” will based on the integration of the Northeast Federal University (NEFU) and other scientific institutes and higher education organizations, scientific organizations and their cooperation with organizations operating in the real sector of the economy. The new center will ensure the competitiveness of the local scinetists' research and development and the training of qualified personnel.

As the government noted, the goal of the center creating is the generation of new scientific knowledge of global and macro-regional importance, based on the co-evolution of social, natural and technical systems, their transformation into the practice of education, human capital and scientific and innovative activity. Ecology and climate, industrial development, including the geology of the mainland Arctic, engineering structures, transport and energy - these are the main directions of applied research of the new center.

It should be recalled that according to the goals of the national project “Nauka”(Science), by the year of 2024, Russia should be among the five leading countries of the world that carry out research and development in areas determined by the priorities of scientific and technological development.