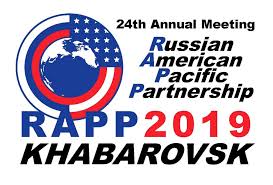 The Russian American Pacific Partnership 24th Annual Meeting took place in Khabarovsk, Russia, on June 26-27, 2019. The Russian-American Pacific Partnership (RAPP) is a bilateral forum between the private and public sectors to establish cooperation and overcome obstacles to business and commercial development between Eastern Russia and the United States, to expand opportunities between Eastern Russia and the Western United States through volunteer partnership activities - RAPP enthusiasts, representatives of the private and public sectors, through support and cooperation in the development of RAPP initiatives.

The RAPP participants say that the Meeting was very positive. Government officials and business representatives, as well as indigenous peoples’ representatives made specific proposals for expanding cooperation between the United States and the Russian Federation, despite all the difficulties of relations

The meeting participants discussed a broad range of issues including tourism, trade and economic development, scientific collaboration, and relations among the indigenous peoples of the Arctic. Number of visa issues were raised. Interest in expanding ties between sister cities was emphasized.

Participants of the meeting noted importance of RAPP for the development of US-Russian cooperation under bilateral sanctions. Discussing cooperation at the regional level, the parties have agreed to extend cooperation in the field of sustainable energy solutions, aviation, trade, tourism, construction of roads and runways at small airports with the participation of US companies. American partners have an interest in training American students in Russian universities.

The participants stressed the need to increase interaction between the Russian regions and the United States within the "Northern Forum". Ten working groups of the Northern Forum ensure cooperation in telemedicine, adaptation to climate change, environmental protection and preservation of biological diversity, and the development of business cooperation in the North etc.

Since the Northern Forum is an observer of the Arctic Council, it can promote joint US-Russian projects aimed to protect interests of the Indigenous and local people of the northern Pacific Ocean and the Arctic territories. The Northern Forum is participating in a number of Arctic Council’s Sustainable Development Working Group projects such as the Arctic Renewable Energy Atlas, projects on preservation of traditional knowledge of Arctic communities. These projects are an example of successful cooperation between the Russian Federation, the United States and other countries. This approach allows to use the Arctic Council's abilities to protect the interests of the Northern residents at the state level.

The meeting participants came to the conclusion that the official authorities should pay maximum attention to the economic development of the Arctic region and its communities, as well as to the development of cooperation within the framework of the RAPP, the Northern Forum and the Arctic Council, especially when the officials work on the national arctic strategies.

Following the meeting, recommendations to the United States and Russian Federation’s official authorities will be prepared and published on the official website of RAPP. They will be based on the need to restore the interaction between the governments of the United States and Russian Federation, and the need to increase the participation of representatives of both countries in joint events and forums. As a first step in the implementation of these ideas the USA business representatives were invited to join the 5th Eastern Economic Forum, which will be held on September 4-6 in Vladivostok.