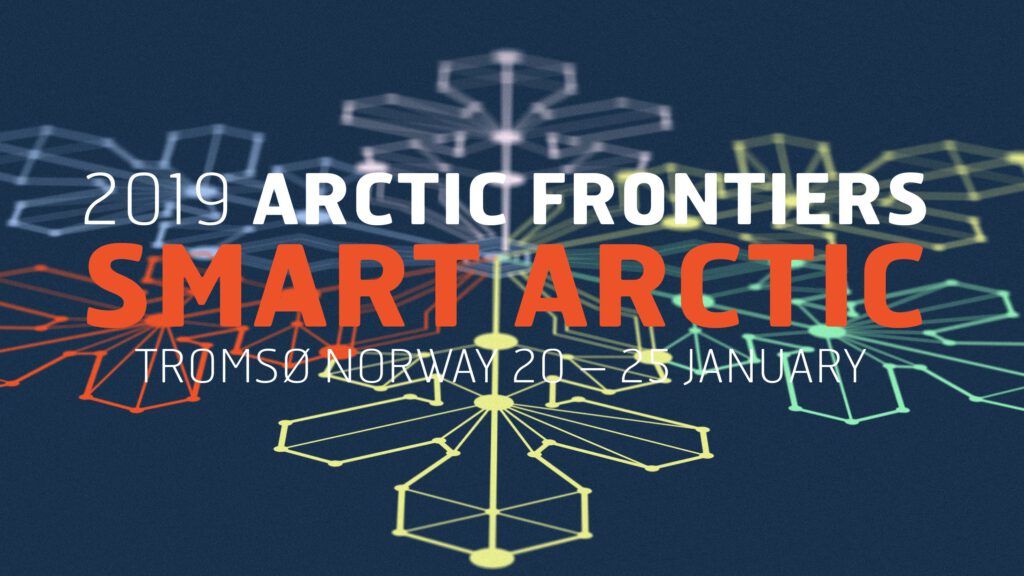 Arctic Frontiers started out in 2006 assembling the first global scientific conference on economic, societal and environmental sustainable growth in the north. In January 2019, we will arrange the 13th conference with the theme “Smart Arctic”. The conference has a pan arctic perspective and builds new partnerships across nations, generations and ethnic groups. Arctic Frontiers provides a forum for dialogue and communication between science, government and industry in the Arctic.

In 2019, the Arctic Frontiers plenary program will have five main sessions with the following tentative working titles: State of the Arctic, Blue Growth, Smart Solutions, Bridging the gap and Arctic business prospects. Following the plenary, we will organise an abstract driven science program addressing Plastics in the Ocean, the Future of Governance and Handling Vulnerability in Arctic Ecosystems, State of the Arctic and A Smart Arctic Future.

In between the annual conferences, the Arctic Frontiers secretariat works together with the partners with all the five pillars that Arctic Frontiers is founded upon; Policy, Science, Business, Young and Arena. Through seminars, open debates, workshops, projects and network meetings both in Norway and abroad, Arctic Frontiers sets the agenda and advocates a responsible knowledge-based growth and development in the Arctic.

Participation of the Northern Forum in the conference "Arctic Frontiers"

In 2014, the conference was attended by experts of the project “Human in the Arctic”: the head of the state autonomous institution “Center for Strategic Studies of the Republic of Sakha (Yakutia)” Valentina Kondratyeva, director of the NEFU Institute of Finances and Economics Alexander Kugaevsky, Executive Director of the Northern Forum Vladimir Vasilyev, Deputy Head of the Department of International Cooperation of the Ministry of Federal Relations and External Relations of the Sakha Republic  (Yakutia) Valery Protopopov.

In the framework of the 2016 Conference, the Northern Forum brought together representatives of regional governments, international organizations and indigenous peoples to discuss the role of local and regional authorities, local communities in the sustainable development of the Arctic.

The round table was organized by the Northern ForumSecretariat and was chaired by the Executive Director Mikhail Pogodaev. The participants:Troms Governor Cecile Mirset and Noordland Governor Thomas Norvoll from Norway, Chairman of the Arctic Economic Council Tara Sweeney, President of the Lapland Chamber of Commerce and Industry Timo Rautajoki, Minister for Federal Relations and External Relations of the Sakha Republic  (Yakutia) Vladimir Vasiliev, delegation from Chukotka Autonomous Region headed by Natalia Slugina, Head of the Department for International Relations of the Office of the Governor of the Chukotka Autonomous Region, President of the University of the Arctic (UArctic) Lars Kullerud, executive director of the International Center for Reindeer Husbandry Anders Oskal, Director of the Institute of the North of Alaska Nils Andreassen, Director of the Arctic Portal of Iceland Halldor Johannsson, and many others.

In the framework of the Conference, the Northern Forum, in cooperation with the International Center for Reindeer Husbandry and the Arctic University of Norway in Tromsø, organized a work travel for the delegation of the Territorial Mandatory Health Insurance Fund of the Sakha Republic (Yakutia) to Norway to study the experience of this northern country in organizing medical services for remote Arctic settlements. The work travel of specialists served to develop the concept of development of Arctic medicine in the Sakha Republic (Yakutia). The delegation was attended by representatives of the compulsory health insurance fund and the insurance company “Sakhamedstrakh” Arian Yermolaev, Lyudmila Novikova and Rosalia Vasilyeva. A meeting was held with Anna Husebbek, the rector of the University of Troms. Also, a visit to the Center for Arctic Medicine at the University of Troms was carried out where a discussion was held on issues related to the development of telemedicine.

2017 The People's Deputy of the Sakha Republic (Yakutia), Chairman of the Standing Committee of the State Assembly (Il Tumen) on the small peoples of the North and the affairs of the Arctic, a member of the Expert Council of the State Duma Committee on Nationalities Elena Golomareva took a part in the XI International Conference "Arctic Frontiers 2017". In a report on the legislative framework established in the SakhaRepublic (Yakutia), Elena Golomarova highlighted the protection of the rights of indigenous peoples of the North. The special emphasis in the speech was made on the interaction of indigenous minorities with companies-subsoil users, leading industrial activities in the field of traditional environmental management and traditional economic activities of the indigenous minorities of the North.

The Minister for the Development of Civil Society Institutions of the Sakha Republic (Yakutia), Sardana Gurieva, also made a presentation on measures taken in the Sakha Republic (Yakutia) to support indigenous peoples of the North and shared the experience of state support for the development of Arctic territories at the session “Regional Forum - the potential of regions and communities in arctic cooperation.”