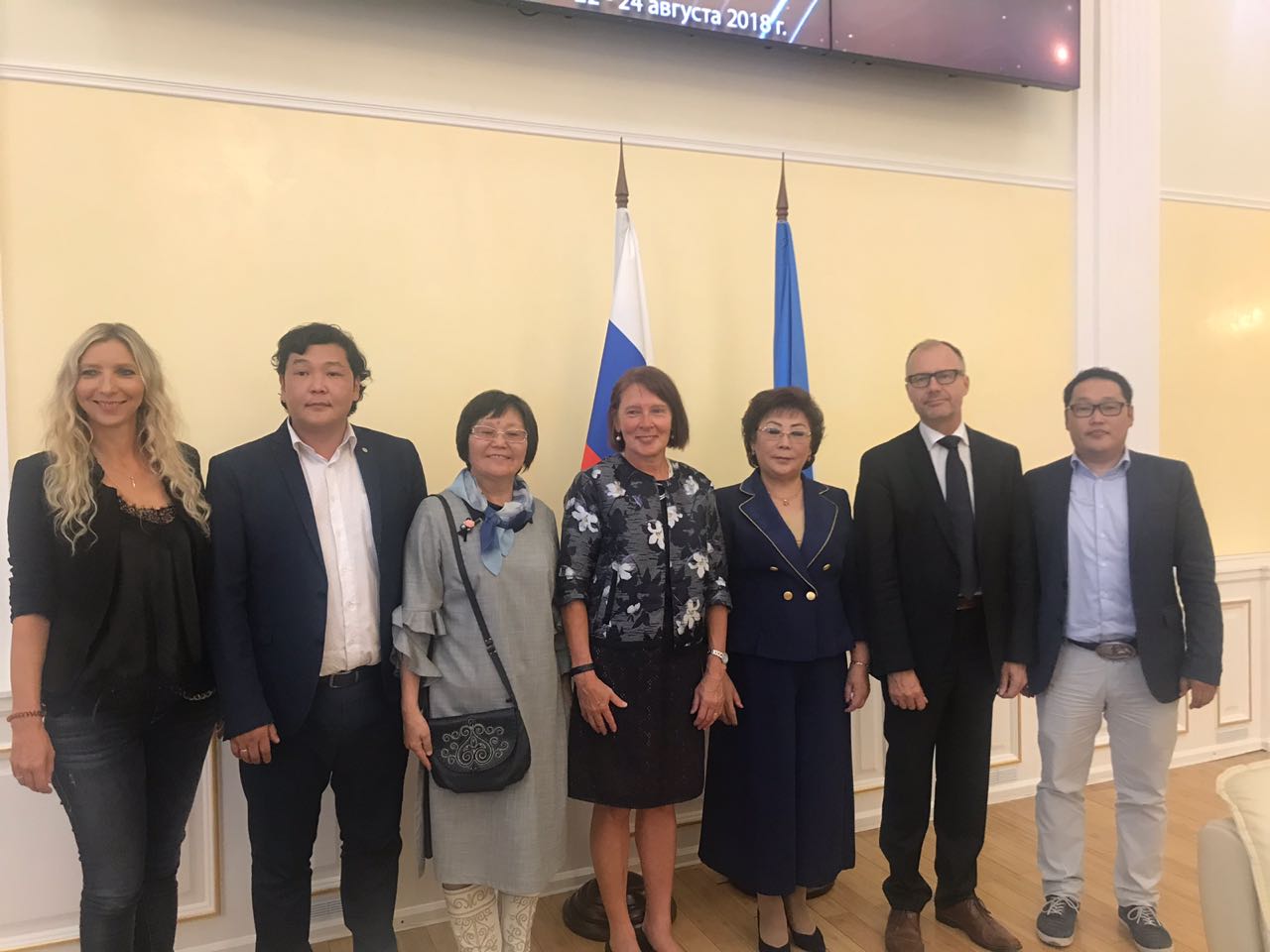 August 22, 2018, Executive Director of the Northern Forum Mikhail Pogodaev held a meeting with the head of the Helsinki City Education Department Liisa Pohjolainen, the principal of Ressu IB World School Ari Huovinen, and the senior lecturer of the Ressu Oksana Mustonen.

The International Arctic School is created on the initiative of the Head of the Republic of Sakha (Yakutia) and is aimed to develop international cooperation between the Arctic countries in the field of educational activity.

It will be located on the basis of the State autonomous supplementary education institution of the Republic of Sakha (Yakutia), the Sosnovy Bor Recreation and Health Center by forming a single innovative educational complex.

The mission of the School is to develop the human and personnel potential of the countries of the Arctic region as the main factor of economic and social development in the context of cross-border cooperation.

Goal: Integration of the federal and international standards in the field of education for the preservation and development of human capital in the Arctic and the North.

International Arctic School in the Republic of Sakha (Yakutia) is an integrated organization that is called to implement network technologies and provide quality education of the world standard to children of Siberia, the Far East of Russia and the countries of the Arctic region.

The international status of the School is confirmed by the ongoing programs of the International Baccalaureate (IB), accreditation in the Council of International Schools (CIS), international educational projects of the UN, UNESCO, the Arctic Council and the Northern Forum.

The International Arctic School is a full-time school in which conditions for harmonious and all-round development will be created.

The languages of teaching in the International Arctic School – Russian and English.

Training will be organized under the International Baccalaureate (IB) programs.

It is worth noting that the idea of this innovative project was originally created Yakutia, where specialists, ten years ago, researched the problems of nomadic education and the preservation of small schools in the rural areas.

The project "Children of the Arctic" is aimed at a joint study of the most successful practices in the field of free pre-school education for children of the indigenous people of the North. It is about creating conditions to study history, state and native languages, consolidating their knowledge of traditional natural resource use. In addition, it is planned to develop educational programs, methods and recommendations for teachers, to find new approaches to integrating the younger generation of indigenous peoples of the North into modern society while preserving the original way of life. As there is a gap in gaining proper knowledge while being in school, difficulties in mastering the school curriculum because of the huge gap in the level of preparation, and this fact puts them in a serious obstacle in terms of obtaining higher education. At the same time, special attention should be paid to finding certain balance in the upbringing and education of indigenous children of the North, so that the educational process does not harm them, not taking them from their way of life, because losing their identity, indigenous students do not always find themselves in modern society, as they can be victims of social ills.

The project, led by the Republic of Sakha, is dedicated to the development of the partnership of schools in the North. The leading organization is the Yakut State National Gymnasium, within the framework of the project, the leading own project "School of Life in the North". Work on the project has been carried out since 2008 and it included activities such as:

International educational video links, olympiads, presentations, educational and research projects for primary schools, meetings of schoolchildren of twin cities and so on. Activities are organized with orientation for primary, secondary and senior classes separately, with the main focus on international events focused on high school students..

Purpose: To organize the conditions for the functioning of the school of life in the North, based on the intercultural communication of the peoples inhabiting the North and to conduct a study on the conceptualization of the Northern world picture.

Programs in the project: Language program "Cooperation between schools"

Purpose: education in schoolchildren of an active life position, inculcation of love for the native northern region.

Purpose: to maintain and promote national sports in the field of protecting and promoting the health of children and their physical perfection; creation of conditions for training in national sports.

Purpose: to study national traditions in the creation and technology of ethnic dress of the peoples of the North.

The founder of the Festival is the Ministry of Education and Science of the Republic of Sakha (Yakutia).

Purpose: To create an open inclusive educational space for the countries of the Arctic region.

As a result of the meeting, agreements were reached to support projects and cooperation between the schools of the Republic of Sakha (Yakutia) and the city of Helsinki, the Republic of Finland.