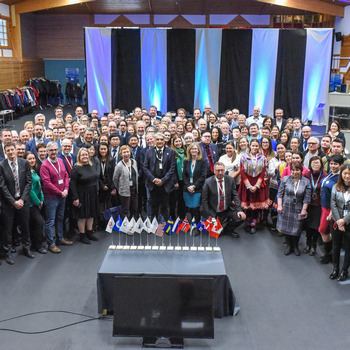 At the meeting concluded on March 23 in Levi, Finland, the Arctic Council addressed the major themes of meteorological cooperation and improvement of telecommunications in the region.
Friday, 23 Mar 2018
Levi, Finland

Representatives of the eight Arctic States and six indigenous Permanent Participant organizations, as well as the Arctic Council’s six Working Groups and more than thirty Observers, met in Levi, Finland on 22-23 March 2018. This was the second Senior Arctic Officials’ meeting held during the Chairmanship of Finland (2017-2019).
There were many issues on the agenda, but the Council focused its discussions on two key themes - meteorological cooperation and connectivity. The meeting was joined by representatives from the World Meteorological Organization and many other institutions with deep knowledge and expertise in these areas. They provided briefings on these subjects for the delegates and presented concrete proposals that could help the Council to pursue pan-Arctic solutions.

The delegates also used this meeting to work further on the first strategic plan for the Arctic Council.
Chair of the Senior Arctic Officials Ambassador Aleksi Härkönen said of the meeting: “During this successful Arctic week with multiple events we were convinced of the importance of meteorological cooperation and connectivity for the Arctic. We also took some important steps in promoting practical cooperation between the Arctic Council and meteorology experts.”
In addition to the two key themes for the week, the Council addressed the Sustainable Development Goals in an Arctic context, received progress reports from the six Working Groups, and heard specific updates on:
• the status of ratification of the scientific cooperation agreement signed in 2017;
• the conference on harmonized implementation of the Polar Code held in Helsinki in February 2018;
• the recently held table-top exercise of the circumpolar agreement on cooperation on oil spill response (abbreviated “MOSPA”); and
• the upcoming Arctic Resilience Forum (10-11 Sep 2018), Arctic Biodiversity Congress (9-11 Oct 2018), Arctic Environment Ministers’ meeting (11-12 Oct 2018) and 2nd Arctic Science Ministerial (Berlin, 25-26 Oct 2018). The first three meetings will take place in Rovaniemi, Finland.

The week’s events in Levi also included opportunities for the Council’s Observers to speak with the Council’s Working Groups about their current and future contributions in the areas of black carbon, biodiversity, and small-community preparedness. An Arctic meteorological summit, organized by the Finnish Meteorological Institute and attended by many delegates from the SAO events, was held prior to the meeting.

A group from the Inuit Circumpolar Council and the Saami Council also joined the meeting as part of a youth capacity-building program. They joined the events in order to gain insight into the workings of the Arctic Council, which is unique as an international forum in which state and indigenous peoples’ representatives sit at the same table.
The next Senior Arctic Officials’ meeting will take place in Rovaniemi, Finland in fall 2018.