A five-year Russian-Norwegian cooperation plan is signed in Murmansk 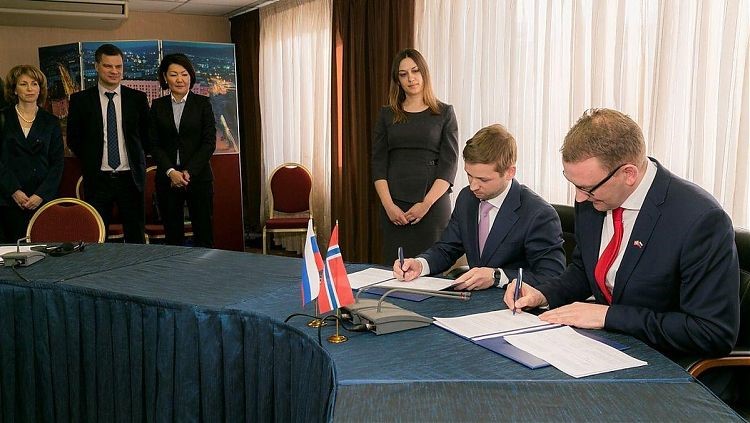 Russian Vice-minister of Economic Development Dmitry Pristanskov and State Secretary of Norwegian Ministry of Trade, Industry and Fisheries Roy Angelvik concluded the meeting by signing the minutes and adopting a five-year Work Plan for strengthening the Norwegian-Russian Interregional and Cross-Border Cooperation 2018-2022.

The Northern Forum is engaged at the Plan's "Social and Economic Development of Northern Regions" section with a project on reindeer herding product processing.

"These are important milestones in the history of Russian-Norwegian cooperation, each of which can be seen as a step towards the transformation of the northern regions of Russia, Norway and the Arctic into a territory of peace, confidence and stability," Roman Duryagin stressed.

Head of the Russian working group, Deputy Minister of Economic Development of the Russian Federation - Head of the Federal Agency for State Property Management Dmitry Pristankov noted that our bilateral trade and cultural relations date back to the 9th century.

"Now, despite the political and economic situation, I am glad that we find the time and opportunity to strengthen our relations," Dmitry Pristankov stressed.

According to the Russian working group co-chair the signed plan is very rich, and envisages the development of about 20 projects in various fields - tourism, fishing, culture, prevention of emergencies.

Co-chairman of the working group, State Secretary of the Ministry of Trade, Industry and Fisheries of Norway Roy Angelvik highly appreciated the efforts of the Russian side to schedule the meeting for other related events - in particular, to the "Fisheries in the Arctic" conference that was held the day before. The Norwegian working group co-chair noted with satisfaction that during the conference a number of Norwegian and Russian companies signed cooperation contracts. This means a good dialogue between businesses in Norway and Russia.

Roy Angelvik also expressed satisfaction with the development of Russian-Norwegian cooperation, reflected in the signed document.