«The Northern Forum is open for cooperation» 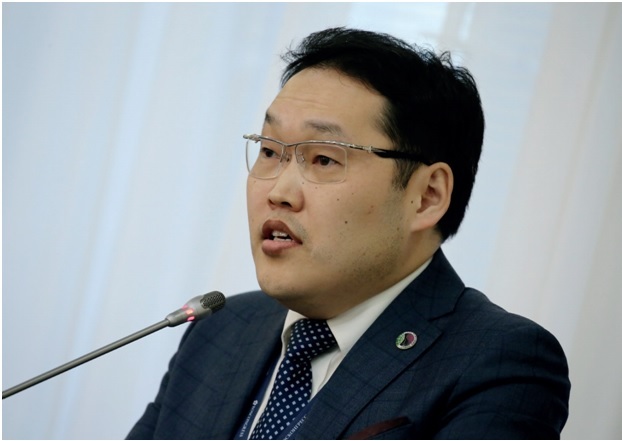 The interests of many countries are intertwined in the Arctic, what makes the Arctic a region of international importance. The geopolitical location, huge resource potential and strategic interests of the leading countries of the world were the catalyst for the formation of Arctic cooperation and its further development to promote the region as a territory of peace and dialogue.  Mikhail Pogodaev, Executive Director of the Northern Forum, one of the most active participants of the Arctic cooperation, told us about the regional cooperation in the field of energy in the Arctic.

- Mikhail Alexandrovich, please tell us about the Northern Forum.

The Northern Forum is an international non-profit organization that serves as a platform for strengthening and expanding a non-political dialogue between the regional leaders of the Arctic and beyond the Arctic. We unite subnational and regional governments to improve the quality of life of people of the Northern and Arctic regions through joint socio-economic initiatives. Currently, the Arctic region in the Northern Forum is represented by seven regions - Sakha Republic (Yakutia), Krasnoyarsk Krai, Chukotka Autonomous Okrug, Yamalo-Nenets Autonomous Okrug, Nenets Autonomous Okrug (Russia), Alaska (USA) and Lapland (Finland). If we put together the length of these regions’ coastlines, then we can say that in fact the Northern Forum represents the greater part of the Arctic in the international arena. In addition, we actively engage and establish cooperation with Sub-Arctic and Non-Arctic regions. Thus, our members are Khanty-Mansiysk Autonomous Okrug-Ugra, Kamchatka Krai, Primorsky Krai, Magadan Oblast (Russia), Akureyri (Iceland), and Gangwon Province (Republic of Korea).

- What energy projects are being implemented in the Northern Forum?

The project activity is the main mechanism for interaction of the Northern Forum member regions. Within the framework of the organization, the First Deputy Minister of Housing, Utilities and Energy of Sakha Republic (Yakutia) Nikolay Duraev coordinates the project entitled “Renewable energy sources. Power supply for isolated settlements of Northern regions”. This project focuses on sustainable energy issues - electricity and heat. The use of such energy in the Far North is extremely promising, given the complexity and cost of using classical energy, and is also a “regional response” to the global initiative for a wider use of “green” technologies.

The international conference “Development of Renewable Energy in the Far East” is held annually in Yakutsk to support the project. Several official foreign delegations, as well as more than 100 major companies from Russia, Japan, China, USA, Germany, France, Switzerland, Czech Republic, Kazakhstan and Uzbekistan took part in the conference this year. The conference plays an important role in the development of the renewable energy industry in the region, allowing market participants to establish business contacts and exchange relevant information on available support tools, technical solutions and initiatives in the development of alternative energy. The conference initiated several major cooperation projects such as the construction of the world's largest polar solar power plant in Batagay by agreement between the Government of Sakha Republic (Yakutia) and RAO UES East, the construction of a unique wind energy complex in Ust-Kamchatsk by the Japanese government organization NEDO in conjunction with the Government of Kamchatka Krai and RAO UES East, and other projects.

Sakha Republic (Yakutia) plans to learn from Alaska’s experience in the development of light aviation and energy, including renewable energy sources. In this regard, we provide a platform for building interaction and sharing experiences among our member regions. So, this year, within the 22nd meeting of the Russian-American Pacific Partnership (RAPP), which among other issues addressed energy cooperation, I discussed the membership of Alaska in the Northern Forum with the US Consul General in Vladivostok Michael Keays. At the meeting, proposals were voiced to strengthen cooperation between Alaska and the Northern Forum member regions. The Consul General expressed his support for our activities and development of joint projects in the future.

- What other activities are carried out in this area?

The working group of the Northern Forum on Development of Energy in the North is chaired by Nils Andreassen, Executive Director of the Institute of the North (Alaska, USA), who is one of the organizers of the upcoming Arctic Energy Summit in Helsinki, Finland. On the margins of this Summit, it is planned to hold a session with the participation of the members of the Northern Forum Energy Working Group.

- What issues will be discussed at the Summit?

The Arctic Energy Summit, which will take place on September 18-20, 2017, is being held this year for the fourth time by the joint efforts of the Institute of the North and the Ministry of Economic Affairs and Employment of Finland. The summit is an endorsed project of the Arctic Council’s Sustainable Development Working Group (SDWG) led by Russia, Finland, Iceland and the International Gwich’in Council International (GCI). This is a major multidisciplinary event, held every two years, which gathers industry officials, energy specialists and experts, academia, business circles and all stakeholders. The Summit aims at strengthening cooperation and exchanging the world's leading practices in Arctic energy. The event provides an opportunity for active participation in solving the most important issues in the Arctic region, establishing links with policy makers, and encouraging the development of circumpolar cooperation and the development of energy policy. The final product from the Summit will be a report to the Arctic Council SDWG highlighting best practices and lessons learned, strategic pathways for sustainable development related to energy, pilot projects and research gaps.

- The Arctic Council is the leading intergovernmental forum for Arctic cooperation. Do you interact with it?

Yes, the Northern Forum has the observer status in the Arctic Council, which allows us to bring the regional voices to a high intergovernmental level. We take an active part in the Arctic Council projects. In regard to Arctic Council’s energy project activities, we are participants of SDWG projects: Arctic Remote Energy Networks Academy (ARENA) aimed at increasing the capacity and potential of the Arctic population by creating a knowledge and ideas exchange program, and Arctic Renewable Energy Atlas (AREA), which aims to develop an Atlas of Renewable Energy Sources in the Arctic to raise awareness of the energy efficiency in remote and sparsely populated regions of the Arctic. As part of these projects, the Northern Forum is collecting data in the Russian Arctic.

- How do you see the further development of Arctic cooperation?

The Arctic is a unique phenomenon of effective international cooperation and an open peace dialogue. To date, in no other part of the world is there such an interconnected and interdependent form of cooperation embracing all countries of the world. The Arctic region is facing many opportunities, as well as difficult tasks and challenges. It is up to us to solve these issues and whether these opportunities will be taken to their full potential. Therefore, the Northern Forum is open for cooperation, approbation of new ideas and initiatives, as well as the implementation of new projects on energy, transportation, education, science, culture, business, environment, social issues and all other activities related to people of the Arctic and the North.

From November 23 to 25, 2017, Krasnoyarsk will host the XIII General Assembly of the Northern Forum, where we will discuss issues of further development of interregional circumpolar cooperation. The Assembly will include meetings of the Board of Governors, Regional Coordinators Committee, panel discussions on topical issues of sustainable development of the Northern regions in the conditions of global changes in the Arctic and in the North. Also, the Assembly will sum up the results of the two-year Chairmanship of Krasnoyarsk Krai in the organization. Leaders and representatives of the Northern Forum member regions, business partners, project coordinators and participants are expected to attend. In addition, representatives of other regions of the Arctic, permanent participants and observers of the Arctic Council, international organizations and business circles are invited. The joint decisions of the forthcoming General Assembly will largely determine the vector of the subsequent development of our organization and cooperation in the Arctic as a whole.

- Thank you for the conversation and we wish you successful and productive work at the XIII General Assembly of the Northern Forum!