Mikhail Pogodaev met with the US Consul General 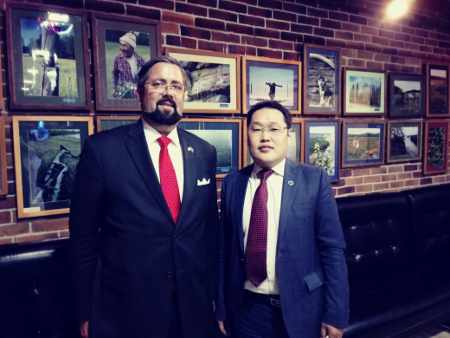 On July 20th, 2017 in Yakutsk, the Executive Director of the Northern Forum, Mikhail Pogodaev, met with the US Consul General in Vladivostok Michael Keays who visited the city at the 22nd Annual Meeting of the Russian-American Pacific Partnership.

The parties discussed the participation of Alaska, which rejoined the Northern Forum in July 2016. The State of Alaska, being one of the founders of the organization, made a great contribution to the development and formation of the Northern Forum. At the moment, in addition to participating in the business partnership, Alaska participates in project activities of the Northern Forum. Together with Alaska, work is under way on such initiatives as the reintroduction of reindeer herding in Barrow in conjunction with the Alaskan Ukpeaġvik Iñupiat Corporation, as well as the International Educational Sports Relay “The Journey of St. Innocent - Uniting the Continents”.
Mikhail Pogodaev proposed on strengthening cooperation between Alaska and the member regions of the Northern Forum. Thus, Chukotka Autonomous Okrug and Kamchatka Krai show interest in more intensive work with Alaska in the sphere of ecological projects, reindeer herding, brown and polar bears.
As a result of the meeting, Consul General Michael Keays expressed his readiness to support the International Educational Sports Relay “The Journey of St. Innocent” in the territory of Alaska.