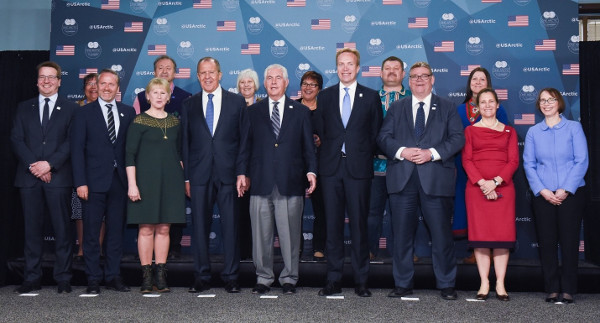 On May 11, 2017, Ministers of Foreign Affairs from the eight Arctic states and leaders of the six Arctic Council Permanent Participants, indigenous peoples’ organizations gathered together at the 10th Ministerial session of the Arctic Council to mark the conclusion of the US Chairmanship and to herald the beginning of the Finnish Chairmanship, which will run from 2017 to 2019.

Foreign ministers of the eight Arctic states signed the third binding agreement developed under the auspices of the Arctic Council, the “Agreement on Enhancing International Arctic Scientific Cooperation,” which will help to facilitate entry and exit of persons, equipment, and material; access to research infrastructure and facilities; access to research areas; the use of traditional and local knowledge; and education, career development, and training opportunities for students and early-career scientists.
Ministers also signed the Fairbanks Declaration, which reviews the work of the Council during the outgoing US Chairmanship and provides guidance for the Council’s work during the incoming Finnish Chairmanship.
At the Ministerial meeting, Finland announced four priority areas of work for the next two years of its Chairmanship: environmental protection, telecommunications development, meteorological cooperation and education. (Finland’s Chairmanship program for the Arctic Council is attached)

Minister for Foreign Affairs of Finland Timo Soini, who now holds the Chairmanship of the Council, said: “Climate change proceeds rapidly in the Arctic, and we need to continue the successful work of the Council”.
In his remarks at the opening of the Ministerial meeting, Secretary of State Rex Tillerson said: “The Arctic Council, which recently celebrated its 20th anniversary, has proven to be an indispensable forum in which we can pursue cooperation. I want to affirm that the United States will continue to be an active member in this Council. The opportunity to chair the Council has only strengthened our commitment to continuing its work in the future.”
The accomplishments of the Council during the U.S. Chairmanship (2015-2017) include projects like the Circumpolar Local Environmental Observer Network (CLEO), Marine Protected Areas (MPA) Network Toolbox: Area-based conservation measures and ecological connectivity, and a series of health-related projects aimed at improving the health and mental wellness of indigenous and Arctic communities. Major reports released around the Ministerial meeting include “Telecommunications Infrastructure in the Arctic: A circumpolar assessment,” “Snow, Water, Ice and Permafrost in the Arctic” (SWIPA, 2017), the “State of the Arctic Marine Biodiversity” (SAMBR) report, and “Standardization as a tool for prevention of oil spills in the Arctic,” as well as many others. All public deliverables will shortly be available via the Arctic Council’s public archive (oaarchive.arctic-council.org).
At the Arctic Council Ministerial meeting in Fairbanks, seven new Observers were admitted:

The International Council for the Exploration of the Sea

Photo: US Secretary of State Rex Tillerson and Executive Director of the Northern Forum Mikhail Pogodaev

The heads of delegations for Arctic states:

With Minister of Foreign Affairs of the Russian Federation Sergey Lavrov

The first meeting of the Arctic Council Senior Arctic Officials during the Finnish Chairmanship will take place in late October 2017 in Oulu (Finland).