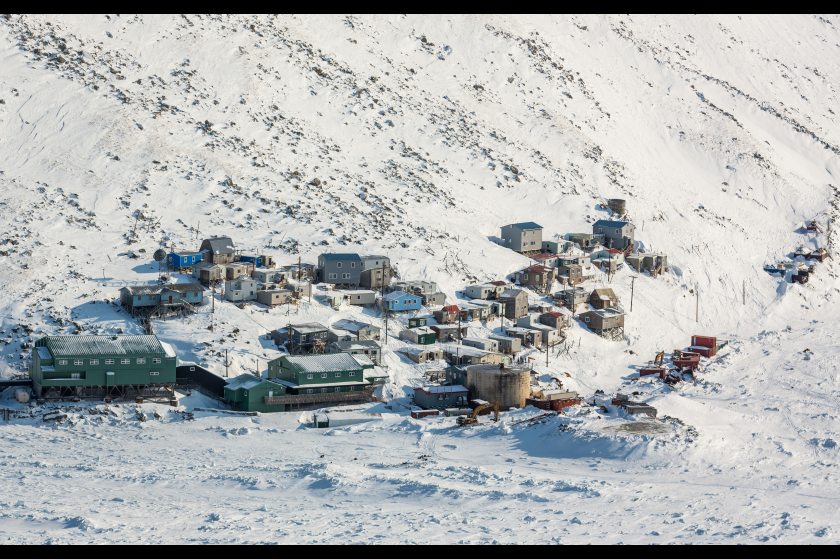 Across the Bering Strait, Robert Soolook can easily see the looming hulk of the neighboring Russian island where some of his relatives used to live before they were forced to relocate to the Soviet mainland at the start of the Cold War.

"It's always a reminder, each and every day," Soolook, an Inupiat Eskimo, says of the view from Little Diomede Island. Less than 3 miles away is Big Diomede Island, but it might as well be thousands of miles from his village, Diomede, because it is strictly off-limits, patrolled by Russian border guards.Now Soolook and other residents from his tiny village want to resurrect ties with their relatives or at least connect with their descendants, thanks to National Park Service grants totaling more than $83,000.

Before World War II, indigenous people from both sides traveled freely between the two rocky islands for hundreds of years. Soolook had not been born yet when many indigenous people living in Russia's nearby Chukotka region had to abandon settlements like the one on Big Diomede.

Soviet authorities ordered the 25 to 30 remaining inhabitants to move to the Yup'ik Eskimo village of Naukan in Chukotka in 1948, when the so-called political ice curtain was put in place. That new community was closed a decade later as the Soviets shut down more sites nearest to the Soviet-U.S. border. The former Big Diomede residents were forced to move again, dispersing among various communities.

Today, all that remains on Big Diomede are Russian meteorologists and troops staffing a border guard station established on the island in the 1940s.

It's been more than 20 years since Soolook, 49, visited several long-lost cousins as part of two separate expeditions to Chukotka accomplished after U.S./Russia relations began to warm in the 1980s. He hopes to be among those going again.

The latest attempt to visit is being coordinated by a travel company, Anchorage-based Circumpolar Expeditions, which focuses on western Alaska and the Russian Far East. One of the main goals is to travel to Chukotka communities with Diomede elders next year to visit relatives, according to company president Tandy Wallack. Another goal is to invite the Russian relatives to ultimately travel to Little Diomede for a reunion either next year or in 2017, according to Wallack, who envisions festivities featuring traditional dancing, storytelling and Native foods.

"I think the concept is a really good one — reuniting people, sharing information about how they're connected," said Janis Kozlowski, manager of the National Park Service's Shared Beringian Heritage Program.

Wallack said the idea first emerged when she was working on another Little Diomede project in 2008. A resident asked if she could help find relatives connected with Big Diomede.

"My first thought was, how could I say no?" Wallack said. She told the resident she would do what she could and asked her to send a list of what relatives she knew about.

After the Soviets established control over Big Diomede in the 1920s, most of the inhabitants moved to the smaller island, leaving behind only about a dozen people. Most were members of one family headed by a man who went by the name of Agayeghaq. That tiny population had more than doubled by the time of the Cold War displacement, according to an account by Smithsonian Institution anthropologist Igor Krupnik.

In a phone interview, Krupnik said the Diomede reunion project might have been more doable two years ago, before U.S. and Russia relations cooled. Taking a large contingent of people to Chukotka will require a substantial level of Russian cooperation, a necessity that's difficult to predict, according to Krupnik. But Little Diomede residents are running out of time.

"The youngest person who may remember life on big Diomede is now 75 years of age, and there are very few elders of that age in Chukotka," Krupnik said.

The project has been slow in materializing since the first grant was awarded in late 2013. It involves the time-consuming process of obtaining official permissions to travel from the two countries, as well as passports for Little Diomede residents. It also involves matching old Native names with modern families and arranging for Russian interpreters for those who no longer know the common Native language once shared by the Diomeders on both islands.

From Soolook's point of view, reconnecting with his Russian relatives would be a way to honor his late mother as well.

"That would help her in heaven," he said.