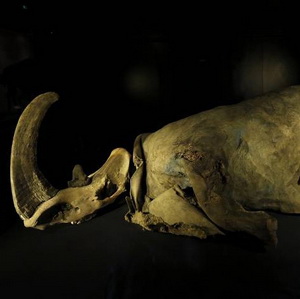 Scientists have made a unique discovery in Sakha - they found the remains of a baby woolly rhinoceros, who lived at the late Pleistocene era, which began about two million years ago and ended more than 10 thousand. Years ago.

This is the only known body in the world as Albert Protopopov, head of the Sakha Academy of Science Mammoth fauna department, says.

"This Baby rhino carcass is unique. Its research will provide answers to many questions: in what conditions they lived, their diet, their modern descendants," – as the scientist follows.

He also added that the remains were found by two hunters in Abyisky region of Sakha in September 2014, but it was not delivered to Yakutsk until now. They called their discovery Sasha - honoring the man who discovered her.

Ancient animal carcass is half gnawed, but has a well preserved skull, soft tissues and teeth. To determine the exact age, the remains were sent to an abroad lab.

Earlier in 2007, an adult woolly rhinoceros remains were found in Sakha. In the 19th century in the two areas - in the Verkhoyansk and Vilyui - mummified carcasses of these animals were also found, later to be exhibited in the Zoological Museum in St. Petersburg, where these can be found today.