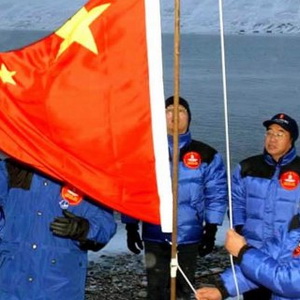 Earlier this year, a group of Chinese officials and scientists visited the Norwegian city of Tromso for the ninth Arctic Frontiers conference, where matters related to the northern region were discussed. The meeting brought together 1,400 government officials, scholars and activists from 30 Arctic and non-Arctic countries from January 18 to 23 to discuss climate change and energy matters related to the Arctic. Chinese officials say that China, now the second-largest economy in the world and a major emitter of greenhouse gasses, is important in the fight against the global warming. It and many other Asian nations like Singapore, are also voicing greater concern about environmental changes in the Arctic region, changes they say are beginning to have big impacts on their countries. Norway's minister of foreign affairs, Borge Brende, said China's growing importance in economic affairs and in the scientific community would get it more involved in issues related to the Arctic.

In 2013, China was granted permanent observer status to the Arctic Council, an intergovernmental forum for addressing the region's issues. India, Italy, Japan, South Korea and Singapore won similar recognition. The Arctic Council was founded about 20 years ago by eight nations with territory in the Arctic: Canada, Denmark, Finland, Iceland, Norway, Russia, Sweden and the United States. Asian countries were getting more involved now mainly due to issues related to climate change, shipping and natural resources, said Ian Storey, an expert at Singapore's Institute of Southeast Asian Studies. These countries, especially China, would play an important role in exploiting the region's resources, he said.

Sam Tan Chin Siong, a Singaporean politician, said at the meeting in Norway that his country is facing threats related to rising sea levels caused by melting Arctic ice.

Some 3.5 to 4.1 percent of the region's ice melted every 10 years from 1979 to 2012, according to a report from Intergovernmental Panel on Climate Change, a United Nations body.

Seven thousand kilometers away from the Arctic, Singapore celebrated its 50th National Day on land, Tan said, but No. 100 might see it under water.

Another reason Asian countries are paying more attention to the Arctic is shipping lanes that could open as more ice disappears. One of these paths is the Northern Sea Route, which runs from the Atlantic Ocean, past Norway and Russia, and then into the Pacific. Six ships sailed from Europe through the route in 2010, and more came in following years. This Arctic route is shorter than the traditional one through Egypt's Suez Canal and the Malacca Strait. The northern path could trim travel time from East Asia to Europe by 30 to 50 percent; a voyage from China could be 40 percent shorter. If an Arctic route could be regularly used, Chinese ships will use it more, said Zhang Pei, an expert from Shanghai Institutes for International Studies.

In 2013, the Yongsheng, a ship from China Ocean Shipping (Group) Co., traveled from Taicang, in the eastern province of Jiangsu, to port of Rotterdam, in the Netherlands, via the Northern Sea Route. The vessel reached the major European port in 18 days, nine less than a trip using the Suez-Malacca path requires. But Storey said that the northern passage is still unreliable, and is not ready to challenge the Suez-Malacca option.

The Arctic region has been found to have oil reserves of more than 90 billion barrels, about 13 percent of the global total, according to a 2008 report from the U.S. Geological Survey. There are also 47 trillion cubic meters of natural gas reserves, 30 percent of the world total. Chinese companies are already interested. In 2013, China National Petroleum Corp. (CNPC) agreed to buy one-fifth of the Yamal liquefied natural gas project in the Arctic from the Russian oil company Novatek Inc. No amount was announced. Getting at Arctic oil and gas will be difficult and expensive, Zhang said, and cash-rich Chinese oil companies could be big players in the field. He warned, however, that they had no advantages in technology and personnel.

Russia, the United States and Norway have started researching technologies to exploit oil and gas on the region. Sun Xiansheng, an expert at a research institute at CNPC, said Chinese companies would learn from foreign experience and are confident they will play a role in Arctic oil exploration.