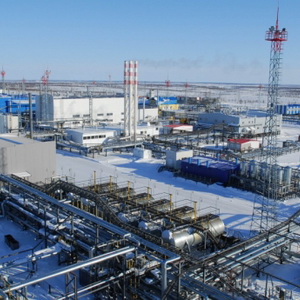 Gazprom awards a contract with competitor NOVATEK, a holder of "Yamal LNG", for delivery of almost 3m tonnes of liquefied natural gas to Asian-Pacific states starting 2017.

Gazprom Marketing & Trading and Yamal Trade contract presumes delivery of 2.9m tonnes of LNG per year. Year span for the contract exceeds 20 years. Among the core markets for this LNG is India. Pricing policies are set according to a formula with oil indexation. This gas may be exported only after 2017, upon commencing of the "Yamal LNG" plant, capable of producing up to 16,5m tonnes of LNG (75% of this value is already in the contract).

Although this contract is not the biggest known contract, its value is significant as the new markets for Russian gas on the Asian-Pacific region demand more LNG than core producer Gazprom is capable to handle. This kind of partnership therefore acts as replacement for non existing pipelines for the natural gas.

Yamal LNG is amongst the rare large Russian projects that has not been hit with the sanctions. Total retains its share in cooperation with Yamal LNG due to earlier investments made into the project.