New Orthodox Church to be built in Yugra 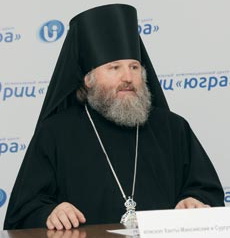 New Orthodox Church of the Holy Martyr Tatiana in Kogalym, Yugra commences construction The bishop of Khanty-Mansiysk and Surgut Paul performed the rite of consecration of the stone, cross and place for the construction of the church (temple).

The ceremony was also attended by the Governor of Ugra Natalia Komarova, the president of OJSC "Lukoil" Vagit Alekperov, the head of Kogalym city Nikolay Palchikov, the clergy and citizens of Kogalym. Addressing the participants of the ceremony, the bishop of Khanty-Mansiysk and Surgut Paul noted that it is a special and historic day for all population in the region. During the ceremony, the governor of Ugra Natalya Komarova, president of OJSC “Lukoil” Vagit Alekperov and the bishop Khanty-Mansiyskiy and Surgutskiy Paul signed certificates, which contain information about the date, time and place of laying the stone.

One copy of the letters sent to the rector of the Church of the Holy Martyr Tatiana priest Jacob Mousse, the second one enclosed in a capsule and placed in stone. The construction of the temple will begin next year with the blessing of Patriarch of Moscow and All Russia. The author of the project is the architect Andrei Obolenskiy, who participated in the construction of the Christ the Savior Cathedral in Moscow. On the territory of the new Church in the future we plan to build a sunday school. Funds for design and survey work selected in the frame of the cooperation agreement between the government of the Khanty-Mansiysk autonomous district - Yugra and OJSC "Lukoil". The construction works will be financed by charitable foundation "Lukoil".