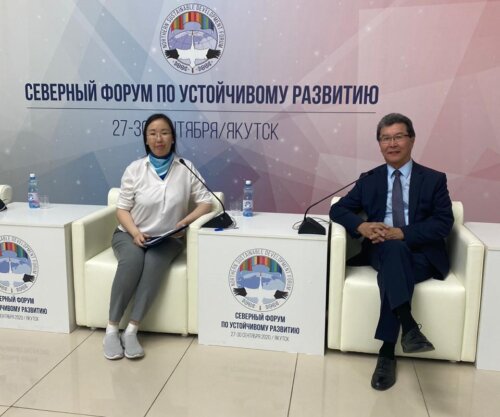 On the eve of the anniversary year of the Northern Forum, which turns 30 in 2021, a youth wing of an international organization was created that unites the northern regions of different countries. Ekaterina Sofroneeva, Savina Danilova, Sardaana Zhendrinskaya and Sardaana Syromyatnikova were the initiators of the creation of the Northern Youth Forum.

To test the hypothesis about the need to create an IF, on September 27-28, 2020, an event of the same name was held within the framework of the Northern Forum on Sustainable Development.

The 1st Youth Northern Forum was successful and confirmed the need for the creation of IFs. Initially, it was planned to make the MSF not just an event, but a base for further work to intensify work with young people in the northern regions and countries and people and organizations from other parts of the world who are interested in cooperation with the North and the Arctic.

About 300 participants from the regions of Russia, Iceland, Finland, Norway, Sweden, USA, Canada and China have registered for the forum. The ISF program consisted of 14 sites, all of which were held online.

Human Capital: Young Talents of the North and the Arctic

Change Makers of the North: Volunteering and Internship Programs

In addition, the conference “Model of the Youth Forum of the UN Economic and Social Council (ECOSOC)”, Presentation session “Initiatives for Sustainable Development”, networking session “Icebreaker”, round table “Preservation of traditional knowledge of indigenous peoples in the modern conditions of the North ", A seminar" Food security of the Arctic and the North "and a lecture" Meetings with interesting people. "

In a short time, the initiative group established contacts with the Artic Youth Network, the Arctic Student Research Club of the Moscow State Institute of International Relations and other organizations.

On November 19-21, the Northern Forum Model (ISF) was held online - an event in the format of a role-playing game based on modeling the activities of the Northern Forum structures, and allowing the most organic and effective inclusion in the joint work of youth representatives dealing with issues of the northern regions in various aspects ... About 250 participants from 11 countries (Russia, Canada, USA, Latvia, India, Azerbaijan, Uzbekistan, Greece, Ukraine, Peru, Great Britain) applied for participation. The event was organized by the Northern Forum, North-Eastern Federal University named after M.K. Ammosov, MGIMO MFA of Russia, Vaasa University, Finland, International Institute for Energy Policy and Diplomacy (MIEP) MGIMO MFA of Russia, student research club "Arctic" MGIMO MFA Russia, public organization "Intersfera".

On December 11, at a meeting of the Committee of Regional Coordinators of the Federation Council, Yekaterina Sofroneeva made a presentation of the IFs and presented the results of the SF Model. The meeting participants supported the initiative of youth to unite and work together.

In 2021, IFs will work to establish a base for operations, expand the team and build partnerships. Among the first events in 2021 are events aimed at supporting and developing human capital in the North and the Arctic, the development of non-resource sectors of the economy and climate change. Special attention will be paid to issues of interaction with the Arctic Council, ECOSOC and other organizations.