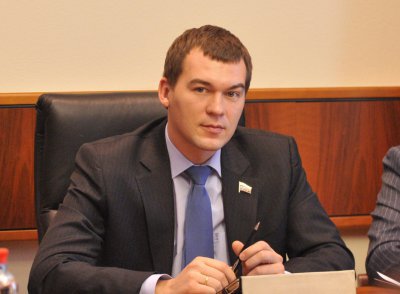 President Vladimir Putin has appointed Mikhail Degtyarev, a State Duma deputy from the Liberal Democratic Party of Russia, as the interim governor of the Khabarovsk Krai.

Before appointing Degtyarev as the acting governor of the region, Putin met with him. During the meeting, the parliamentarian announced his readiness to immediately fly to Khabarovsk and in a month to report on the state of affairs in the region. According to Degtyarev, first of all, he will deal with issues related to the sustainable work of local authorities, preparations for the heating season, as well as the fight against the spread of coronavirus.

Mikhail Degtyarev arrived in Khabarovsk today and was introduced to the regional government. It is planned that then Degtyarev will tell reporters about his immediate plans in his new position. Degtyarev was appointed acting head of the region before the elections. The elections for the head of the Khabarovsk Krai will be held on a single voting day in 2021, recalled a member of the Central Election Commission Yevgeny Shevchenko.

Degtyarev is from Samara, he is 39 years old. He was a State Duma deputy from the LDPR of the past and present convocations. In this convocation, he headed the State Duma Committee on Physical Culture, Sports, Tourism and Youth Affairs. In 2013, he took part in the elections for the mayor of Moscow. Degtyarev is included in the presidential personnel reserve, he trained management personnel at the RANEPA.

Khabarovsk Krai is a member of the Northern Forum since 2018.